Among a sea of people, learning from the 'paupers' pope' - Catholic Courier 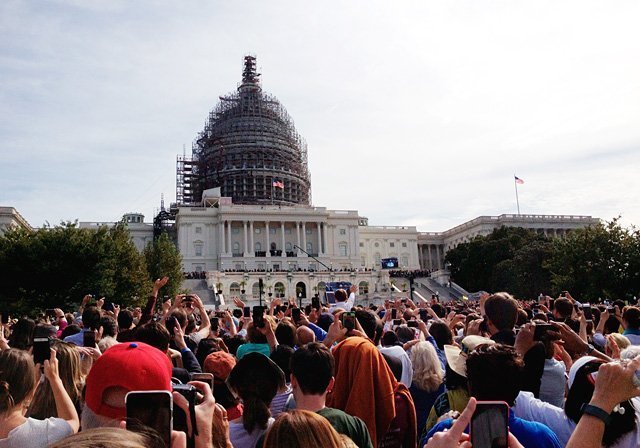 Thousands gathered on the West Lawn of the U.S. Capitol building to watch Pope Francis' address to the joint members of Congress Sept. 24. Former staff writer Amy Kotlarz had received a pair of tickets in a lottery through Sen. Kirsten Gillibrand's office. (Photos courtesy of Amy Kotlarz)

The man at the Washington, D.C., street corner was using a megaphone and holding aloft a large sign that read, “The Pope is the Antichrist.”

This pope? The pope who had just made a moral case to Congress for treating everyone with dignity in a speech that transcended political lines? The one who had just called on our country’s top politicians to engage in dialogue and to work for the common good?

I opened my ears to the man’s monologue to see if I could understand why he had such a problem with the pope. Through the rambling snippets I caught, it sounded as though he felt that Pope Francis was leading good people astray.

I wondered what Pope Francis would have said to the man if he had met him. My best guess, after thinking about this for several days, is that he would embrace the man like he had the thousands of us who had journeyed from as far away as Alaska and South America to hear him: by asking the man to pray for him.

The man’s viewpoint and message were by far the most extreme I encountered while journeying to D.C. to hear Pope Francis speak to Congress Sept. 24, courtesy of a pair of tickets I had received in a lottery through Sen. Kirsten Gillibrand’s office. I was there with my aunt, a retired U.S. history and government teacher, and about 50,000 other people who likewise had received tickets to watch the speech via Jumbrotrons and speakers on the West Lawn of the Capitol building.

Yet everywhere I went, people had strong opinions of Pope Francis.

For example, a wildlife biologist riding the subway pulled his phone out of his pocket and showed a close-up photo of the pope, waving from his little black Fiat. Though he was not a Catholic, the lion expert said he connected with much of what the pope said, and he wanted to know if he was really going to talk about climate change to Congress. 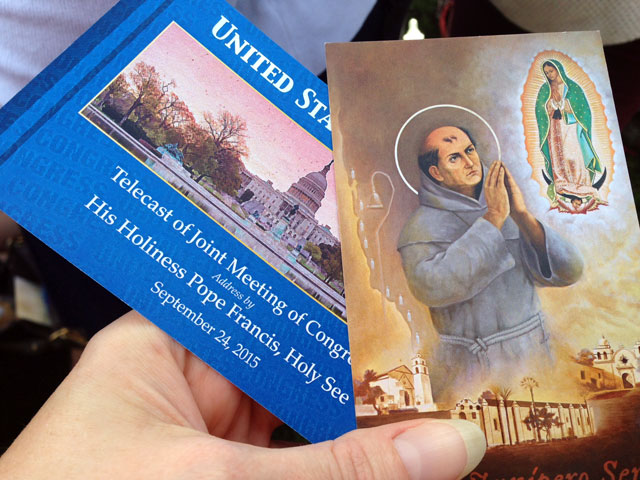 A ticket and a prayer card from the Joint Meeting of Congress Address with Pope Francis Sept 24.

It struck me that maybe the “paupers’ pope” already had spoken through his choice of vehicle, just as he spoke loud and clear about power by choosing to lunch with homeless people instead of politicians.

Before the pope’s speech, several people debated the controversial canonization of California missionary St. Junipero Serra, which happened the day before. I sympathized with the difficulty of reconciling the sins of saints, but I also later recalled their conversation when the pope said, while referring to immigration, that, “It is difficult to judge the past by the criteria of the present.”

Even in the airport, the day after the pope’s speech, people were still discussing how the pope had reminded Congress — Congress! — of the Golden Rule, reciting it for them as if he were a school teacher correcting a young pupil. The applause inside and outside the Capitol that greeted him, as he said it, was so enthusiastic that he had to wait until it died down to finish what he was saying. 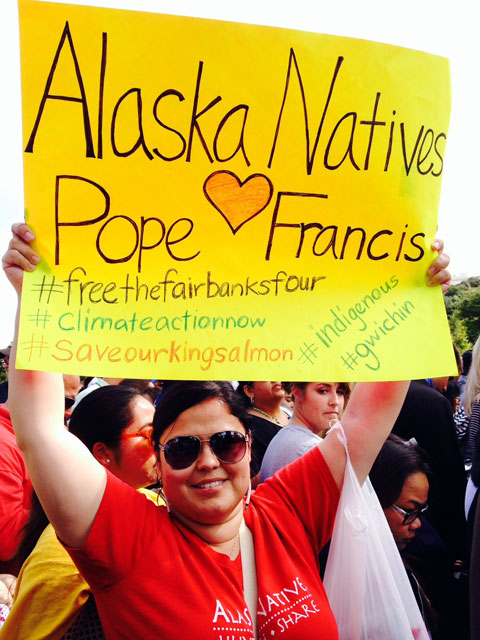 Reactions to what Pope Francis said throughout his speech were audible, such as the wows that came from the crowd when he called on Congress to stop the arms trade, terming it “money that is drenched in blood.”

He drew loud applause in and out of the chambers when he said, “We, the people of this continent, are not fearful of foreigners, because most of us were once foreigners. I say this to you as the son of immigrants, knowing that so many of you are also descended from immigrants.”

Family members asked if the pope would be listened to — if his speech would make a difference.

Well, I thought, considering how much respect people in Congress give each other, he’ll be listened to as much as any other person in Congress is listened to. And the mere fact that he got the invitation to be the first pontiff to address Congress, and garnered thousands of positive headlines during his visit, to me shows Catholicism’s continued relevance.

At home, a fellow Catholic said he was unimpressed by the speech, saying that the pope hadn’t spoken up forcefully for the unborn. Yet the pope did use the Golden Rule to say we should protect life at every stage of development, which drew wild cheers from many on the West Lawn.

Less familiar for many on the lawn were his mentions of Catholic Worker founder Dorothy Day as an example of a person who uplifted the downtrodden, and Trappist monk and author Thomas Merton, whom he used as an example of having successfully engaged in interfaith dialogue. The pope’s highlighting of those two Catholics may have caused a spike in interest in their lives.

Someone near me confessed after the speech that she had thought Pope Francis was highlighting Doris Day; she hadn’t ever heard of Dorothy Day. Merton’s mention also drew confused looks from the crowd. Yet I thought if I strained hard enough, I might hear cheers in D.C. all the way from Nazareth College, which is home to several Merton experts.

For me, the highlight of the day was after the speech, when the Holy Father came onto a balcony to greet the crowd. Even though I was far away and surrounded by thousands, he stood out in white surrounded by those wearing dark suits. He blessed children and families in the audience, which touched me deeply.

The journey was one I will never forget, and I am grateful to all those who made it possible for me to be there: my sister, who traveled from New York to stay with my young son; my cousin and her family, who opened their home to me; and my aunt, for accompanying me.

And I am grateful to have had the chance to be in the presence of the pope, who continues to give me a positive example to follow and messages that fill my soul with hope.

So I will close with prayers for all, including that man on the street corner. If he were ever to read this, I hope he would take a moment to say a prayer for me.

Kotlarz is a former staff writer for the Catholic Courier.