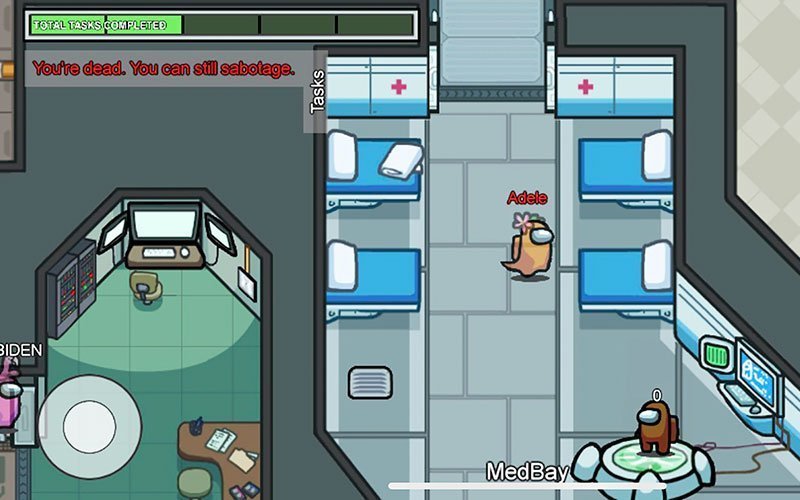 This is a scene from the video game "Among Us." The Catholic News Service classification is A-II -- adults and adolescents. Not rated by the Entertainment Software Rating Board. (CNS photo by InnerSloth)

NEW YORK (CNS) — Set aboard a spaceship, “Among Us” (InnerSloth) is an entertaining murder mystery game.

An example of the popular social deduction genre in which players are secretly split into two opposing teams and must try to guess one another’s true identities or allegiances, it’s too complex for little kids. A bit of mayhem also makes it best for teens and grown-ups.

Four to 10 players join a game lobby where they can customize their short, colorful astronaut characters. As the lobby loads the crew onto their craft, up to three gamers will take on the role of shape-shifting aliens impersonating humans.

These impostors are tasked with sabotaging the ship and, if possible, killing off the astronauts without being caught. The aliens win as soon as they outnumber the crew.

Astronauts are assigned individual tasks to complete across the vessel and are also responsible for repairing any damage done by their opponents. If all work is finished before the interlopers can wreck the ship or eliminate the crew, the humans win.

Any time one astronaut finds another dead, he or she calls an emergency meeting during which evidence is weighed to try to determine the identity of the culprit. As accusations are hurled, the aliens try to frame crewmates.

Participants can vote to jettison a suspect into the cold vacuum of space. But they will only discover after the fact whether they have guessed correctly or have instead killed a genuine co-worker.

To avoid this outcome, a majority of players can decide not to hold a vote. When an innocent party is ejected, whether through manipulation or a simple mistake, the narrative offers no judgement beyond a dispassionate text announcing the truth. At least some gaming fans may find this gambling with human life distasteful, the lighthearted tone and fictional nature of the proceedings notwithstanding.

As for the genre as a whole, it may have the potential to become divisive or even toxic when playing with strangers. As with many online games, there can be hackers whose only intention is to sow discord. But this element is obviously not an issue when playing with friends.

In fact, the popularity “Among Us” has quickly achieved may be due, in part, to the sense of community it can serve to foster in these days of social distancing. Add to that the ease with which it can be played on the go, and the secret of its success seems clear.

Playable on Steam, Android and iOS. Crossplay between platforms is available.

The game contains minimal cartoonish violence. The Catholic News Service classification is A-II — adults and adolescents. Not rated by the Entertainment Software Rating Board.