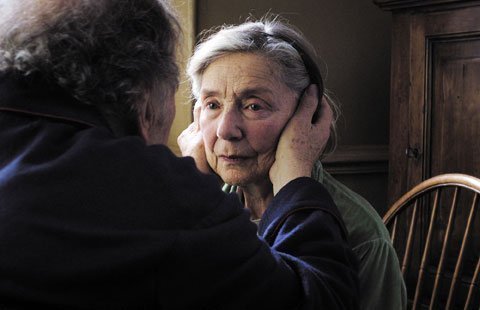 NEW YORK (CNS) — If "Amour" (Sony Classics) makes you want to check in on your parents or grandparents, it’s done its job. Late plot developments, however, make this a film even mature viewers will need to approach with caution and prudence.

The French-language drama is meant to provoke discussion and to be disturbing, despite its generally sensitive portrayal of enduring love expressed by an elderly couple. Nothing about either aging or debilitating infirmity is sanitized or whisked away.

Georges (Jean-Louis Trintignant) and Anne (Emmanuelle Riva) are retired music teachers, both in their 80s, living in Paris. A series of strokes causes Anne to lose control of her right side, then renders her incontinent, then robs her of speech. After that, she begins to refuse nourishment.

Everything takes place in their apartment because after her first hospital visit, Anne made Georges promise not to put her there again, and he tries to get by with home nurses. Confronted by their daughter, Eva (Isabelle Huppert), about why he doesn’t consider a hospice, Georges replies, "What they do there, we can do here. I promised her that."

But at what price to his own sanity? The film’s stately pacing doesn’t conceal the damage to either husband or wife.

Writer-director Michael Haneke doesn’t make subtle movies. He directs raw, unbending statements on moral behavior, as he did in his last film, "The White Ribbon" (2009), which showed the roots of Nazi cruelty in Germany.

The act-of-madness resolution in "Amour" does not comport with Catholic teaching — far from it, in fact. But the objectively sinful behavior portrayed takes place in the context of increasing desperation. Unsupported by the comforting milieu of a hospice and devoid of faith, the character involved is overwhelmed.

In "The White Ribbon," Haneke was quite cruel toward German Lutheranism, portraying it strictly as a form of oppression. So the absence of religion here may not be altogether a negative development.

Death and dying are experiences focused on by all faiths, but rarely addressed — at least honestly — in film. Well-grounded audience members can interpret the film using their own prisms of faith, as well as their own experiences with the grim subject matter.

The film contains mature themes and objectively immoral actions, fleeting upper female nudity, a single use of profanity and an instance of rough language. The Catholic News Service classification is L — limited adult audience, films whose problematic content many adults would find troubling. The Motion Picture Association of America rating is PG-13 — parents strongly cautioned. Some material may be inappropriate for children under 13.