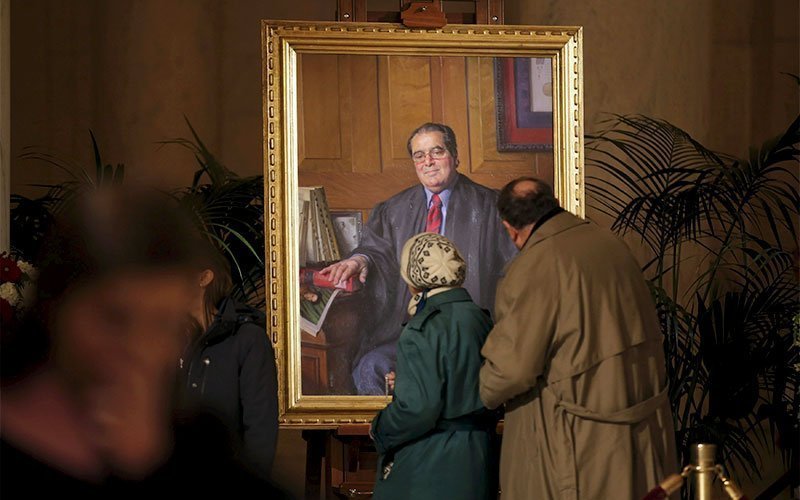 Members of the public pause to look at a portrait of the late Justice Antonin Scalia while his casket lay in repose in the Great Hall of the Supreme Court in Washington Feb. 19, 2016. (CNS photo by Carlos Barria, Reuters)

Trump briefly mentioned the former justice, noting that Barrett had once clerked for him, and he pointed out that Scalia’s wife, Maureen, and son Eugene, U.S. secretary of labor, were both in attendance for the White House Rose Garden ceremony.

The New York Times reported that Trump had been impressed with his interview with Barrett just days before the announcement, saying she had been described to him as a “female Antonin Scalia.”

In introducing Barrett, he described her as someone with “unyielding loyalty to the Constitution,” which echoed how Scalia also had been described for his originalist take on the Constitution, interpreting it through the lens of what the Founding Fathers meant when they wrote it.

Trump also noted that a “very highly respected law professor at Notre Dame wrote to Justice Scalia with a one-sentence recommendation: ‘Amy Coney is the best student I ever had,'” and Scalia hired her soon afterward.

That professor was John Garvey, current president of The Catholic University of America. In a Sept. 25 column in The Washington Post, he said he told Scalia that Coney had been his best student and said the justice was “wise to hire her.”

Garvey, who was teaching a First Amendment class at Notre Dame Law School at the time, said Coney had written an answer on a final exam that was “so impressive that I rushed to share it with one of my colleagues. This student, I said, gave a response to my own question much better than the one I had come up with myself. “

Barrett, at the White House ceremony, did not immediately bring up Scalia. She said if she were confirmed as a Supreme Court justice, she would be “mindful of who came before me,” noting the U.S. flag was still flying at half-staff on federal buildings in memory of Ginsburg.

“Justice Ginsburg began her career at a time when women were not welcome in the legal profession. But she not only broke glass ceilings, she smashed them. For that, she has won the admiration of women across the country and, indeed, all over the world,” Barrett said. She then segued to Scalia, whom she called her mentor, by stressing his friendship with Ginsburg.

The two justices “disagreed fiercely in print without rancor in person,” she said, adding that she strives to emulate that same pattern.

“I was lucky enough to clerk for Justice Scalia, and given his incalculable influence on my life, I am very moved to have members of the Scalia family here today,” Barrett said, adding that even though that experience was more than 20 years ago, what she learned still resonates.

“His judicial philosophy is mine too: A judge must apply the law as written. Judges are not policymakers, and they must be resolute in setting aside any policy views they might hold,” she said.

When Barrett clerked for Scalia in 1998 and 1999, the Chicago Tribune said law clerks gave her the nickname “the Conenator” — a play on her maiden name and the Arnold Schwarzenegger character “The Terminator” — for her ability to destroy “flimsy legal arguments.”

On April 7, 2017, Justice Neil Gorsuch filled the seat left vacant by Scalia’s death on Feb. 13, 2016. Senate Republican leaders chose not to vote on Judge Merrick Garland, the nominee put forth by President Barack Obama March 16, 2016, in order to wait for a new nominee to be presented after the 2016 presidential election. Trump nominated Gorsuch Jan. 31, 2017, 11 days after he became president.

Gorsuch, who was raised Catholic, worships in an Episcopal church. Barrett, a Catholic mother of seven, has already faced questions directly about her faith and how it could impact her as a judge during 2017 Senate hearings focused on her nomination to serve on the U.S Court of Appeals for the 7th Circuit, based in Chicago.

When Sen. Dick Durbin, D-Illinois, asked her if she considered herself an “orthodox” Catholic, Barrett said: “If you’re asking whether I take my faith seriously and am a faithful Catholic, I am. Although I would stress that my present church affiliation or my religious beliefs would not bear in the discharge of my duties as a judge.”

Scalia, a Catholic father of nine children, similarly addressed his faith and his judicial work. “I don’t think there’s any such thing as a Catholic judge. There are good judges and bad judges,” he told the Catholic Review, Baltimore’s archdiocesan newspaper, in 2010. “The only article of faith that plays any part in my judging is the commandment: ‘Thou shalt not lie.'”

He also said it wasn’t his job to make policy or law, but to “say only what the law provides.”

“My burden is not to show that originalism is perfect, but that it beats the other alternatives,” he said in a 2010 lecture.