An angel announces the birth of Jesus - Catholic Courier 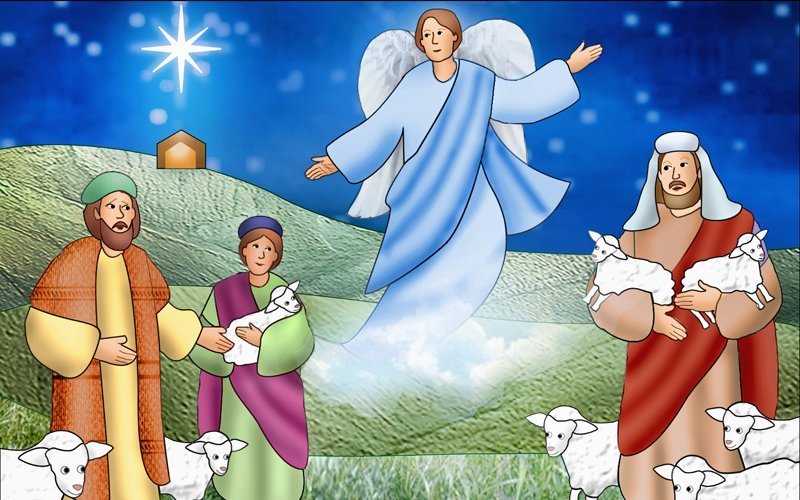 An Angel announces the birth of Jesus

An Angel announces the birth of Jesus

One day, the Roman Emperor Caesar Augustus wanted to count the people who lived in the lands he ruled. All those living in those lands needed to return to their ancestral hometowns to be counted.   A man named Joseph was living in the town of Nazareth in Galilee. A relative of King David, Joseph took his pregnant wife, Mary, and traveled to Bethlehem in Judea to take part in the census.

When the couple reached Bethlehem, the time came for Mary to have her baby. She gave birth to a son, whom she wrapped in swaddling clothes. She laid him in a manger, because there had been no room for Joseph and Mary to stay at an inn.

During this time, there were shepherds who were living in the fields around Bethlehem. They were keeping watch over their flocks at night when an angel from God appeared in their midst.

The glory of God shone so brightly around the angel and the shepherds that the men became frightened.

“Do not be afraid; for behold, I proclaim to you good news of great joy that will be for all the people,” the angel said. “For today in the city of David a savior has been born for you who is Christ and Lord. And this will be a sign for you: You will find an infant wrapped in swaddling clothes and lying in a manger.”

Suddenly, the lone angel was joined by a multitude of other angels who were all praising God.

“Glory to God in the highest and on earth peace to those on whom his favor rests,” they said.

After the angels returned to heaven, the shepherds looked at each other excitedly.   “Let us go, then, to Bethlehem to see this thing that has taken place, which the Lord has made known to us,” they said.

1. Where did Joseph and Mary travel?

2. Who told the shepherds about the infant’s birth?

TRIVIA: How old was Jesus when his parents named him? (Hint: Luke 2:21)

The shepherds were not the only ones who received messages from angels after Jesus’ birth.

In Matthew 2:13-15, we learn that after Joseph, Mary and the infant Jesus had been visited by the Magi, Joseph had a dream. In this dream, an angel warned him that King Herod of Judea planned to find Jesus and kill him.

“Rise, take the child and his mother, flee to Egypt, and stay there until I tell you. Herod is going to search for the child to destroy him,” the angel told Joseph.

Joseph did what he was told and fled to Egypt with his family during the night. In the meantime, Herod ordered the massacre of all boys who were infants up to age 2.

After Herod died, an angel again appeared to Joseph in a dream.

“Rise, take the child and his mother and go to the land of Israel, for those who sought the child’s life are dead,” the angel said.

So Joseph, Mary and Jesus returned to Israel and lived in the town of Nazareth in Galilee.

St. Elizabeth Ann Seton was born in 1774 in colonial New York City and was raised an Episcopalian. She married a merchant named William Magee Seton and had five children.

Her husband died in 1803 in Italy, where Elizabeth had learned about Catholicism. She joined the Catholic Church in 1805 in New York.

The Seton family’s shipping business had gone bankrupt, leaving Elizabeth poor and friendless. A priest from Baltimore suggested that she open a school for girls in that city. So in 1809, Elizabeth founded the U.S. Sisters of Charity, which opened many schools and orphanages.

Using the hints provided from Matthew 2, put a T next to the sentences that are true and an F next to the ones that are false regarding the Magi’s search for Jesus.

3. ___ King Herod asked the elders of the city where the Messiah would be born. (verse 4)