An angel comes to Joseph in a dream - Catholic Courier 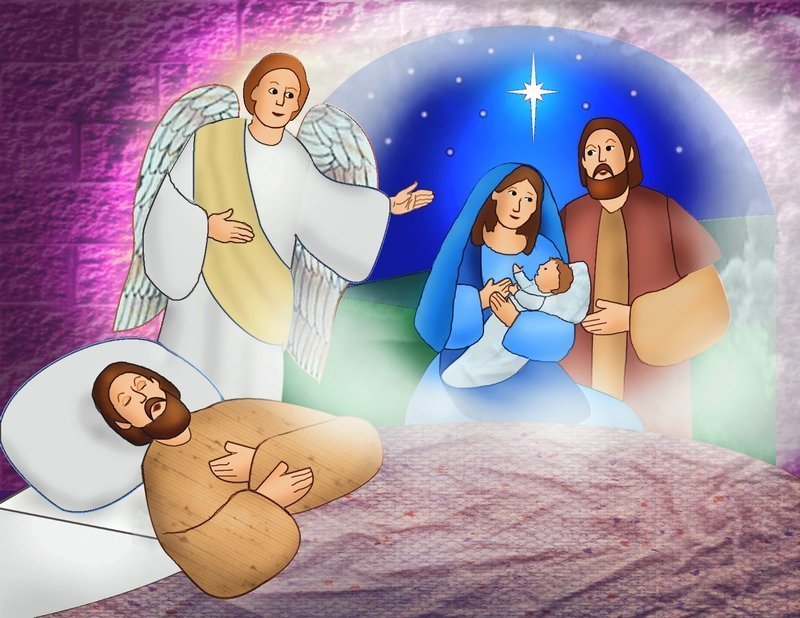 Joseph was a very devout and righteous man who always obeyed God’s laws. He worked as a carpenter and was not very wealthy, but he did come from a very famous family. King David, the shepherd boy whom God made king of the Israelites during Old Testament times, was one of Joseph’s relatives.

Joseph was betrothed to a woman, a virgin named Mary. “Betrothed” means that Joseph and Mary were married, but they were not yet living together as husband and wife in the same house.

One day, Joseph learned that Mary was going to have a baby. He did not realize that the angel Gabriel had told Mary that the Holy Spirit would come upon her and that “you will conceive in your womb and bear a son, and you shall name him Jesus. He will be great and will be called Son of the Most High, and the Lord God will give him the throne of David his father, and he will rule over the house of Jacob forever, and of his kingdom there will be no end.”

Joseph decided that, according to the law, he should no longer be married to Mary. He also he did not want to get Mary in any trouble or cause her to be shamed or harmed, so he decided that he would divorce her without making a big deal about it.

Then, one night, Joseph had a dream. An angel of God came to him and spoke.

“Joseph, son of David, do not be afraid to take Mary your wife into your home,” the angel said. “For it is through the holy Spirit that this child has been conceived in her. She will bear a son and you are to name him Jesus, because he will save his people from their sins.”

What the angel said to Joseph fulfilled a prophesy that God, through one of his prophets, had revealed to his people in the Old Testament: “Behold, the virgin shall be with child and bear a son, and they shall name him Emmanuel.” Emmanuel means “God is with us.”

When Joseph woke up, he did exactly as the angel had told him to do. He did not divorce Mary, but instead took her into his home and waited for Jesus to be born.

READ MORE ABOUT IT
Matthew 1

1. What famous person was Joseph related to?
2. To whom was Joseph betrothed?