An angel frees the apostles from prison - Catholic Courier 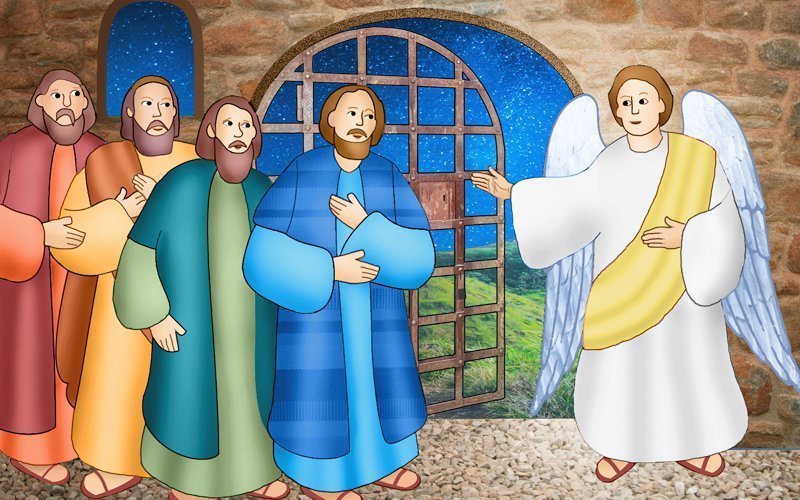 An angel frees the apostles from prison

An angel frees the apostles from prison

After Jesus returned to his Father in heaven, the apostles preached to the people about Jesus.

This angered the high priest and the Sadducees, who had the apostles thrown in jail.

During the night, an angel of the Lord came to the jail and opened the doors.

“Go and take your place in the Temple area, and tell the people everything about this life,” the angel said.

The apostles left the jail. In the morning, they went to the Temple to teach.

Meanwhile, the high priest convened the Sanhedrin, which was the ruling body of the Israelites, and asked that the apostles be brought in from jail to the Temple.

“We found the jail securely locked and the guards stationed outside the doors, but when we opened them, we found no one inside,” reported the court officers who had gone to the jail.

The captain of the Temple guard and the chief priests were unsure of what to do. Just then, a man rushed up to them.

“The men whom you put in prison are in the Temple area and are teaching the people,” he said.

The apostles were brought before the Sanhedrin and questioned by the high priest.

“We gave you strict orders (did we not?) to stop teaching in that name,” the high priest said of the apostles’ preaching about Jesus.

“We must obey God rather than men,” the apostles replied.

The high priest and the Sanhedrin members were so angry that they wanted to put the apostles to death.

But Gamaliel, a well-respected member of the Sanhedrin, had the apostles put outside.

“Have nothing to do with these men, and let them go,” he advised. “For if this endeavor or this activity is of human origin, it will destroy itself. But if it comes from God, you will not be able to destroy them; you may even find yourselves fighting against God.”

The rest of the Sanhedrin agreed. The apostles were beaten, ordered to stop speaking in Jesus’ name and released.

The apostles rejoiced, and they continued to teach about Jesus.

1. Who had the apostles thrown in jail?

2. How did the apostles get out of jail?

The Bible contains several accounts of the apostles being jailed.

For example, in Acts 4, Peter and John were taken into custody for teaching that Jesus is the Messiah. After being questioned, they were let go and told not to talk about Jesus anymore.

In Acts 12, King Herod put Peter in jail. On the night before his trial, Peter was heavily guarded and placed in double chains. Suddenly, an angel appeared and told Peter to follow him. Peter’s chains fell from his wrists, and the angel led him past the guards and out of the jail.

In Acts 16, Paul and Silas were put in jail when they were preaching in Philippi. At midnight, there was a great earthquake, and the prison doors flew open and the chains on the prisoners were loosened. Even though they could escape, Paul and Silas stayed to evangelize the jail guard and his family, who were all baptized. In the morning, the authorities set the men free.

Paul was arrested many more times after this. One time, he was kept in jail for several years. As a matter of fact, the letters he wrote to encourage some of the new Christian communities were written while he was in jail. These letters — Ephesians, Philippians, Colossians and Philemon — are part of the New Testament.

Francis di Girolamo was born in Italy in 1642. When he was 28, he entered the Society of Jesus, even though he already was a priest in Naples, Italy.

Francis was a renowned preacher and served Naples and the surrounding countryside. He sought out sinners in prison and converted a number of prisoners to Christianity.

Among his other works was opening a charitable pawnshop and rescuing children from dangerous situations. He died in 1716, and we remember him on May 11.