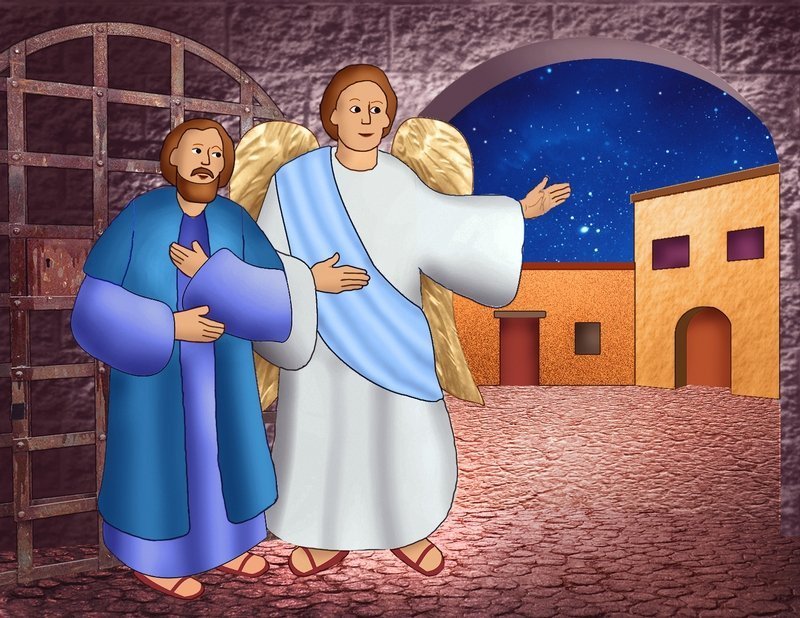 An angel releases Peter from prison

An angel releases Peter from prison

With the help of the Holy Spirit, the apostles and the other new Christians continued to preach to the Jews about God and Jesus.

Some people did not like the apostles’ preaching. One was King Herod of Judea.

King Herod decided to have the apostle James seized and put to death. When this pleased the Jews who did not believe in Jesus, he had Peter arrested. It was the Feast of the Unleavened Bread, and King Herod figured he would put Peter on trial after Passover.

While Peter was in jail, he was secured in chains and guarded by 16 soldiers.

The night before he was to go on trial, Peter was secured in double chains, with a soldier on each side of him as he slept. The doors of the prison also were being guarded.

Suddenly, a great light shone in the cell as an angel of God appeared next to Peter. The angel nudged him awake.

“Get up quickly,” the angel said as the chains fell from Peter’s wrists. The angel told Peter to put on his belt, sandals and cloak.

Peter did what he was told, although he thought he was having another vision, and that what was happening wasn’t real.

Peter and the angel passed by several guards and came to the iron gate leading out into the city. The gate opened by itself. The angel and Peter made their way into an alley, then the angel disappeared.

“Now I know for certain that (the) Lord sent his angel and rescued me from the hand of Herod and from all that the Jewish people had been expecting,” Peter said to himself.

Peter made his way to a friend’s house, where many people were gathered to pray for him. He knocked on the door, and when the maid recognized his voice, she ran to tell the others without letting him in. His friends did not believe the maid, so when they answered the door, they were shocked to see him. Peter told them all about how the angel helped him to escape the jail.

The next morning, there was a great commotion at the jail. King Herod ordered a search for Peter, and when the apostle could not be found, he had the jail guards tried and put to death.

1. Who had Peter arrested?

2. Who rescued Peter from jail?

Peter was not the only apostle to be put in jail. And some of the apostles were even jailed multiple times.

For example, in Acts 4, Peter and John were taken into custody for teaching that Jesus was the Messiah. After being questioned, they were let go and told not to talk about Jesus anymore.

In Acts 5, the apostles kept preaching about Jesus and were all seized and jailed. During the night, an angel of the Lord released them from jail and told them to continue their preaching, which they did.

In Acts 16, Paul and Silas were put in jail when they were preaching in Philippi. At midnight, there was a great earthquake, and the prison doors flew open and the chains on the prisoners were loosened. Even though they could escape, Paul and Silas stayed to evangelize the jail guard and his family, who were all baptized. In the morning, the authorities set the men free.

Paul was arrested many more times after this. One time, he was kept in jail for several years. As a matter of fact, the letters he wrote to encourage some of the new Christian communities were written while he was in jail. These letters Ephesians, Philippians, Colossians and Philemon — are part of the New Testament.

St. Thomas, one of Jesus’ original 12 apostles, is probably best remembered as “doubting Thomas.” He refused to believe that Jesus had risen from the dead until he could put his hands in the Lord’s wounds.

According to tradition, Thomas spread the Gospel to the Parthians, Medes and Persians, and eventually also made his way to India. There is still a large Christian community in India that calls itself “Saint Thomas Christians.”

Although we do not know his birth or death dates, we honor St. Thomas on July 3.