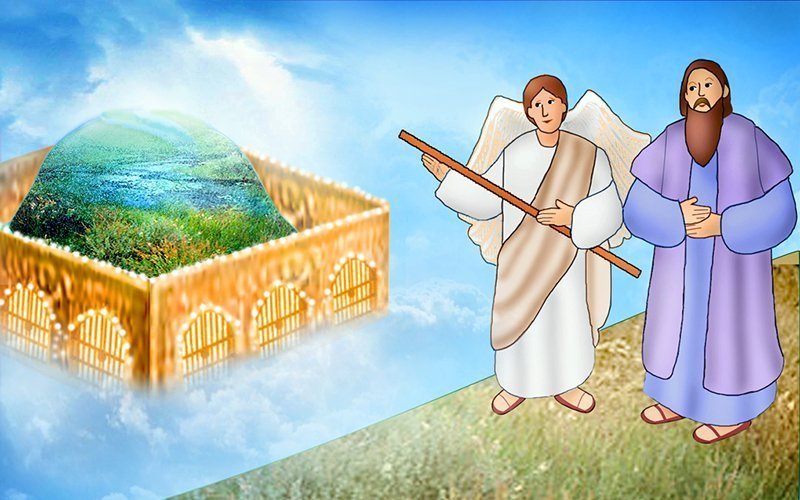 An angel said to John, “Come here. I will show you the bride, the wife of the lamb.” John felt himself transported to the top of a very high mountain. Then Jerusalem, the holy city, came down from heaven for John to see.

Jerusalem was surrounded by a high, protective wall, with 12 entry gates, three facing in each direction: north, east, west and south. Each gate bore the inscription of the names of one of the 12 tribes of Israel, named after Jacob’s sons, and was guarded by an angel.

The angel who was speaking to John held a gold measuring rod, and he measured the dimensions of the great city. The wall surrounding the city was made of jasper, the foundation was decorated with every type of colorful and precious stones and the gates were made of pearl. The city and its streets were pure, polished gold.

In the journal where he recorded what he had seen, John wrote, “I saw no temple in the city, for its temple is the Lord God almighty and the Lamb. The city had no need of sun or moon to shine on it, for the glory of God gave it light, and its lamp was the Lamb.” The gates to the city were always open, and there was no night, only day. But John was also told that “Only those will enter whose names are written in the Lamb’s book of life.”

When the angel escorted him into the city, John saw a river of sparkling, life-giving water. The source of the river was the throne of God. Then John was told, “These words are trustworthy and true, and the Lord, the God of prophetic spirits, sent his angel to show his servants what must happen soon”

John bowed down and started to worship at the feet of the angel who had spoken to him. The angel said, ” Don’t! I am a fellow servant of yours and your brothers the prophets and of those who keep the message of this book. Worship God.”

John stood up on his feet again and the angel delivered a very special message from Jesus. “Behold I am coming soon. I bring with me the recompense I will give to each according to his deeds. I am the Alpha and the Omega, the first and the last, the beginning and the end.”

A recent documentary film about the possible discovery of the tomb of the family of Jesus has created a controversy that has traveled the world. James Cameron and Simcha Jacobvici claim that their investigation caused them to believe the archeological site is genuine. The tomb they are referring to was first discovered almost 30 years ago in Jerusalem. Biblical scholars and archeologists familiar with the site say that Cameron’s film was purely for money-making purposes, and much of what he says is true is either coincidence, a misinterpretation of facts or a deliberate lie. Much of the evidence Cameron used is based on names written on burial boxes, called ossuaries, that were found in the tomb. The Israeli Antiquities Authority has officially stated that some of the inscriptions were forged. Father Jerome Murphy-O’Connor, an expert on biblical archeology, said Cameron’s claims are “nonsense.”

Godehard (d. 1038) was the son of a Bavarian man who served the religious men, called canons, who lived in what was formerly a Benedictine abbey. Godehard received his schooling from the religious, and his devotion to his studies and to the Lord were recognized by the bishops of the area. By the time he was 19, he had been appointed as provost of the canons. He proceeded to become an ordained priest, chose to be a monk and rose to the position of abbot. His leadership was so successful that he was asked to help reform several other monasteries. When he was in his 60s, he became the bishop of Hildesheim. Rather than work quietly until retirement, he worked to build new churches and establish schools. He also built a hospice where seriously ill people could be cared for. We honor him on May 4.