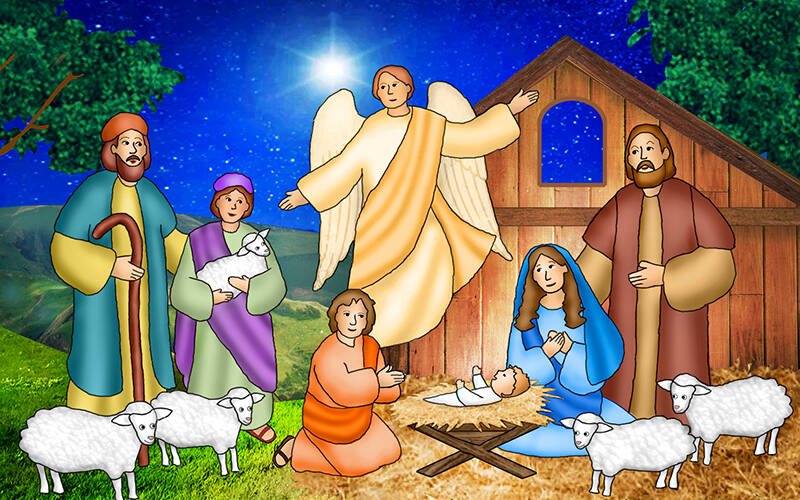 An angel of God appeared to shepherds keeping their flocks by night near Bethlehem to tell them of the Savior's birth. (Illustration by Linda Jeanne Rivers)

When Mary was near the end of her pregnancy, Caesar Augustus issued a decree that everyone in the Roman Empire had to be counted in a census.

Since Joseph, Mary’s husband, was of the house of King David, he and Mary had to travel from Nazareth in Galilee to Bethlehem in Judea to be enrolled.

While Joseph and Mary were in Bethlehem, it came time for Mary to have her baby.

She gave birth to her firstborn son, and she wrapped him in swaddling clothes. She laid him in a manger, because there was no room to stay at the inn.

At the same time as the census, there were shepherds living in the fields around Bethlehem who were keeping watch over their flocks at night.

Suddenly, an angel of God appeared to them, and God’s glory shone all around them.

The shepherds were surprised and struck with great fear.

The angel sought to calm them.

“Do not be afraid; for behold, I proclaim to you good news of great joy that will be for all the people,” the angel said. “For today in the city of David a savior has been born for you who is Christ and Lord.”

The angel also told the shepherds how to recognize the Savior.

“And this will be a sign for you: you will find an infant wrapped in swaddling clothes and lying in a manger,” the angel said.

After the angel finished speaking, suddenly there was a multitude of the heavenly host with the angel. They were praising God and saying, “Glory to God in the highest, and on earth peace to those on whom his favor rests.”

When the angels left, the shepherds were excited to find the Savior who had been born.

“Let us go, then, to Bethlehem to see this thing that has taken place, which the Lord has made known to us,” they said.

When they came into the city, they found Mary and Joseph, as well as the infant lying in the manger.

Upon seeing them, the shepherds made known the message that the angel had told them about the child. All who heard it were amazed.

Then the shepherds returned to the fields, glorifying and praising God.

1. Where did Mary place the infant?

2. Who told the shepherds about the infant’s birth?

What is another name for Bethlehem? (Hint: Luke 2:4)

Answer: The city of David.

We read in Luke 2:22 that Mary and Joseph presented the infant Jesus at the Temple in Jerusalem.

On the day that Mary, Joseph and Jesus came to the Temple, there was a righteous and devout man there named Simeon.

The Holy Spirit had revealed to Simeon that he would not die until he had seen the Messiah that God had promised.

The Holy Spirit was with Simeon in the Temple. When Simeon saw Mary, Joseph and Jesus, he went up to them.

“Now, Master, you may let your servant go in peace, according to your word,” Simeon said as he took Jesus into his arms, “for my eyes have seen your salvation, which you prepared in sight of all the peoples, a light for revelation to the gentiles, and glory for your people Israel.”

Mary and Joseph were surprised by what Simeon said.

Simeon blessed them, and then he turned to Mary.

“Behold, this child is destined for the fall and rise of many in Israel, and to be a sign that will be contradicted (and you yourself a sword will pierce) so that the thoughts of many hearts may be revealed,” he said.

St. Marguerite Bourgeoys was born in in 1620. Growing up in Troyes, France, she formed a special relationship with Our Lady.

After being turned away by two religious communities, she met the founder of Montreal, Canada, when he returned to France for a visit. He invited Marguerite to come to Canada to open a school. Although she had misgivings, she prayed to Mary and decided to go.

Her first school was in an abandoned stable. Her ministry grew to include teaching women crafts and founding the Sisters of the Congregation of Notre Dame.

Marguerite, who became Canada’s first female saint, died in 1700. We remember her on Jan. 12.