An economy in service to our humanity - Catholic Courier 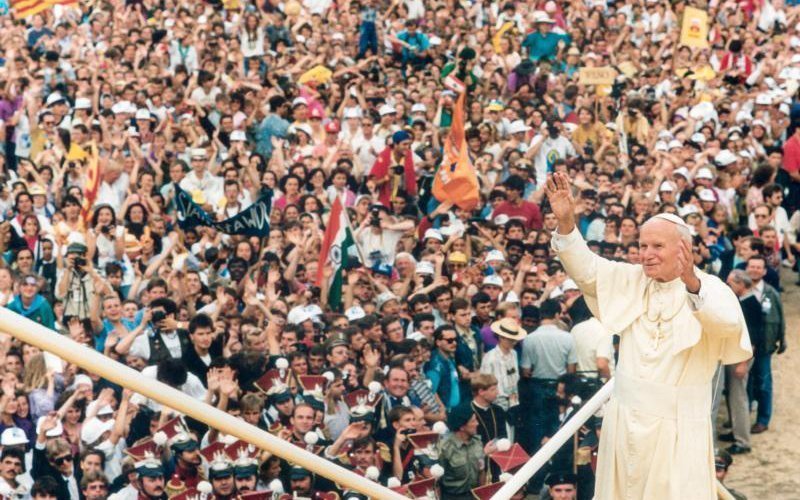 St. John Paul II greets the World Youth Day crowd in Czestochowa, Poland, in 1992. St. John Paul wrote that "respect for the objective rights of the worker ... must constitute the adequate and fundamental criterion for shaping the whole economy." (CNS file photo)

In most pre-modern societies, production and consumption occurred in the household, and running such an economy meant stewarding resources and arranging jobs so that everyone’s needs were met. The goal is not generating winners and losers, but the functioning of the whole.

Catholic teaching on economics starts with this householdlike vision, based on the principle of the “universal destination of goods”: that God gives the material world to all, and economies should more effectively direct these materials for the sake of supporting everyone.

St. Paul VI teaches that “every life is a vocation,” and so every person should have the resources not merely to survive but to develop their gifts in the service of God’s kingdom. This is easily seen in families today, in which everyone works together to assure the full flourishing of each person in all their dimensions.

This is what it means for any economy to serve our humanity. However, challenges come when we scale up this vision to big corporations, extensive markets and impersonal governments.

On one hand, economists and the church agree that these developments undoubtedly have sometimes served to enhance the distribution of goods to everyone. On the other hand, this enormous productivity can lead to moral challenges.

In 1891, Pope Leo XIII began the tradition, carried on by subsequent popes, of teaching authoritative moral principles and rules within which modern economies can better achieve the goal of the universal destination of goods.

In humanizing this economy, the first and fundamental step is to provide basic needs to all, ordinarily through work.

Thus, the church insists that workers must be treated as human beings.

St. John Paul II teaches that “respect for the objective rights of the worker … must constitute the adequate and fundamental criterion for shaping the whole economy.” Requirements include a living family wage, safe working conditions and security in old age, among others.

Every pope since Leo has insisted on these because they provide the basic level of the distribution of capitalist productivity to all. Employers should give these freely in justice, but when they do not, the state may regulate economic activity to achieve them.

It is still the case, especially in developing countries, that, as St. John Paul notes, the earliest conditions of capitalism still apply; and, unfortunately, too many goods in wealthy countries still come from those working in subhuman conditions.

But what about economies where basic rights are (mostly) respected?

In a situation of abundance, the church teaches that we still have crucial choices to make to promote or hinder human flourishing.

St. John Paul warns of a new failure he calls “superdevelopment” in which “an excessive availability of every kind of material goods … easily makes people slaves of ‘possession’ and of immediate gratification, with no other horizon than (their) multiplication or continual replacement.”

Material goods and experiences (like exotic travel) become ends in themselves; we do not ask the crucial question of how economic productivity can serve to make our lives “better.” “More” is not always “better.”

When a society does not have enough food, for example, it makes sense to organize the economy to produce and consume “more” — but now we use the same yardstick of “more” when we need different criteria for a humanly “better” life.

The popes note this cycle is ultimately destructive — of the natural environment, of “human ecologies,” of self-giving neighborliness and of our ultimate gift of our lives to serve God. The relentless pursuit of “more” leads to what St. John Paul calls “structures of sin,” in which “the all-consuming desire for profit” and “the thirst for power” become forces that influence everyone’s decisions, whether they like it or not.

Following these teachings, it is a mistake to pose economic choices in terms of capitalism versus socialism.

This false choice produces what Pope Benedict XVI calls a “market-plus-state binary,” where every question becomes a battle for territory. The church, as Pope Pius XI said, opposes both “individualism” and “collectivism.”

Instead, it asks critical questions of both forms of economic organization, measuring them by their ability to foster the true human vocation: self-gift. St. John Paul says any economy fails “if its forms of social organization, production and consumption make it more difficult to offer this gift of self and to establish this solidarity between people.”

Pope Benedict calls for economies that include, within economic activity, “authentically human social relationships of friendship, solidarity and reciprocity.”

Both market exchanges and state administration can foster or hinder these. Workplaces can include room for mutual self-giving or exclude it; state services can facilitate neighborliness and community or replace them.

Often in either case, unnecessarily distant “structures of sin” crowd out this self-giving; hence the church’s principle of subsidiarity, where larger structures should not take over unless smaller structures prove inadequate.

The church offers not blueprints but rather a set of questions for economies about putting their wealth toward human flourishing for all, rather than toward acquiring fancier possessions and knocking experiences off a bucket list.

The challenge for Catholics is to consider, individually and collectively, how the blessings of economic productivity can be channeled toward building deeper social and spiritual solidarity in God’s household — instead of turning it into an idol that consumes us, others and even God’s own creation.
– – –

(David Cloutier is associate professor of moral theology at The Catholic University of America and the author of numerous books, including “The Vice of Luxury and Walking God’s Earth.”)