An unexpected story from the March for Life - Catholic Courier 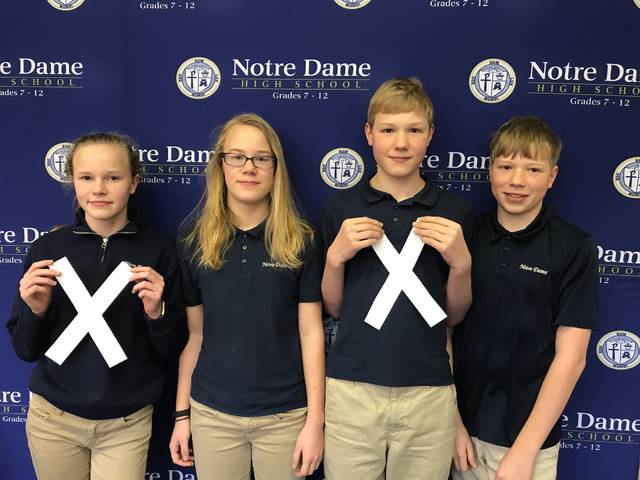 (From left) Quadruplets Rachael, Amanda, Tyler and Derek Simpson stand in the order of their birth. Their mother, Pamela, was told at her six-week ultrasound that her pregnancy should be reduced to twins. Her doctor placed Xs on the ultrasound image to indicate which babies should be aborted — Rachael and Tyler (holding the Xs). (Photo courtesy of Marie McCaig)

Just a few weeks ago, Staff Photographer Jeff Witherow and I traveled to Elmira to catch a bus with junior-high and high-school students from Notre Dame High School to cover the March for Life in Washington, D.C.

I have never been to the March for Life, so when Jeff and I were asked to cover it, I really didn’t know what to expect. I just knew I wanted to focus on the growing number of youths involved in the march and why the Notre Dame students were taking part.

Shortly after boarding the bus, Marie McCaig, a theology teacher and campus minister at Notre Dame and organizer of the trip, told me she had some students that she wanted me to interview. I assumed she chose these particular teens simply because they were well-spoken or had attended the march before.

It was that, and so much more!

Marie asked that I speak to a set of quadruplets, whose mother had been told during her six-week ultrasound to consider aborting two of the four babies. Instead, she chose life for all four of her children, who are now happy and healthy eighth-graders.

After hearing that, I turned to Jeff and said, “That’s our story!”

I talked with two of the quads during the march, as well as with their mother by phone upon returning home. I was blown away by their story. It surely wasn’t anything I was expecting to hear when I boarded that bus for the trip to Washington.

For more about the quadruplets’ story, check out our multimedia project on the March for Life at www.catholiccourier.com/marchforlife2018.