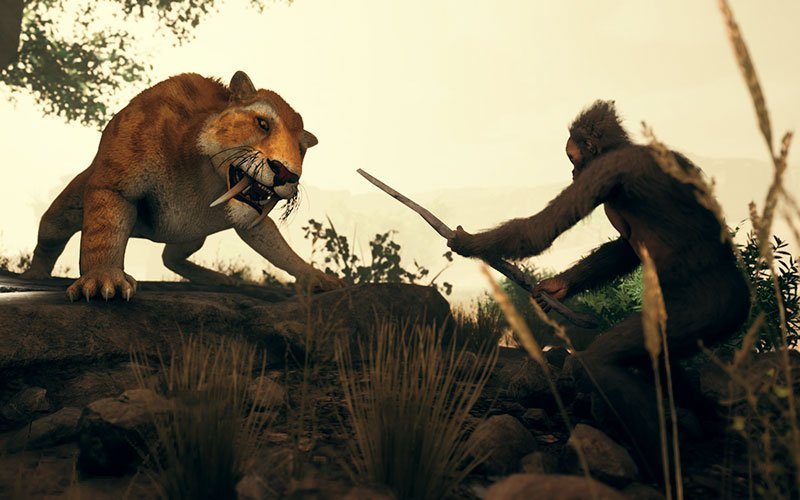 This is a scene from the video game "Ancestors: A Humankind Odyssey." (CNS photo by Private Division)

NEW YORK (CNS) — The survival game “Ancestors: A Humankind Odyssey” (Private Division) explores what life might have looked like millions of years ago. This engaging and unique title, while not appropriate for kids, is especially suited to those of their elders with an interest in the natural sciences.

Players are tasked with safeguarding the survival of a clan of African primates to ensure its continued evolution over eight million years. They control one member of the group at a time, exploring new regions, foraging for food, discovering tools and fending off predators.

Hunger and thirst must be managed effectively, along with health. Broken bones and poison are very real risks as characters explore the continent.

If a primate becomes overwhelmed, a mechanism called fear is triggered. If it’s not conquered, the danger of death increases.

Other threats include such primeval creatures as the Machairodus, a type of saber-toothed cat, and the Metridiochoerus, also known as the giant warthog. Encounters with these and other predators lead to the only instances of violence and bloodshed.

Individuals are capable of learning certain skills, depending on how the player uses them. These abilities can be passed on to future generations, making them stronger and more capable.

However, “Ancestors” doesn’t hold the gamer’s hand. Instead, it encourages players to rely on their own instincts in lieu of an in-game tutorial.

There’s an emphasis here on the welfare of the community that gamers of faith will welcome. At the same time, the focus on Darwinian principles may make some wary.

As is well-known, the Catholic Church has neither officially affirmed nor denied the theory of evolution, at least with regard to the physical origins of humanity. Several popes, moreover, have stated that evolution is not necessarily incompatible with church teaching. The most extensive treatment of the subject can be found in Pope Pius XII’s 1950 encyclical “Humani Generis.”

More recently, in 2014, Pope Francis stated that God “created beings and allowed them to develop according to the internal laws that he gave to each one, so that they were able to develop and to arrive at their fullness of being.” In other words, if evolution is seen as the process through which God’s creative and providential power is manifested, then this is indeed in keeping with Catholic belief.

The insistence of some adherents of evolution that its process is random and blind, thus making the advent of homo sapiens accidental, however, cannot be reconciled with the faith. Within “Ancestors,” by contrast, the player guides the primates he controls with the progress of evolution consciously recognized as the desired goal.

That’s too subtle a distinction, however, for impressionable youngsters to make. Older gamers, on the other hand, will likely enjoy this backward journey to prehistoric times.

Playable on PlayStation 4, Xbox One and Microsoft Windows.

The game contains some violence with occasional gore. The Catholic News Service classification is A-II — adults and adolescents. The Entertainment Software Rating Board rating is T — teens.