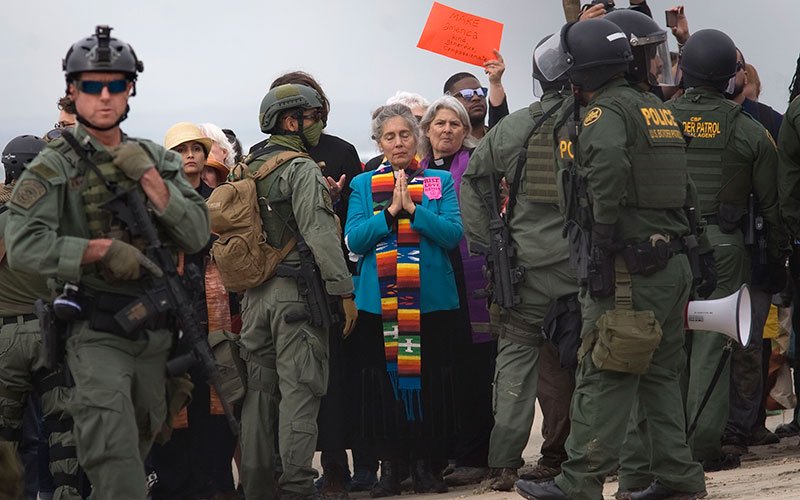 A woman prays during a nonviolent protest Dec. 10, 2018, at the U.S.-Mexico border fence in San Diego in solidarity with the caravan of Central American migrants trying to reach the United States. More than 300 people, many from different religious faiths, held a procession to the border fence. About 30 were arrested. (CNS photo by David Maung)

An epidemic of anger

This is the second in a four-part series on emotions. This issue discusses anger.

It was an ordinary day on a country road and I was a child, out for a bike ride with one of my cousins. We sped down the road, crunching gravel under our bike wheels and stirring up a cloud of dust behind us.

I don’t remember why — maybe she’d said something that had hurt my feelings or I had felt somehow slighted — but as I pedaled, I felt my throat clench and a vibration deep in my throat. I screamed. I wanted to cause harm, to hurt her.

The power of the anger I felt alarmed me. I was disturbed. I didn’t know how to release the energy that seemed broiling and trapped inside of me.

Later, at the CCD class at my parish, I’d learn about the seven capital sins, sinful attitudes that can lead to other sinful behaviors: sloth, pride, envy, gluttony, lust, greed and, yes, anger.

Thinking back to how I felt while out on the bike ride with my cousin, I quickly understood that, if one is not careful, anger can cause harm. I realized then, as I know now, that if anger is not expressed in healthy ways, it can damage one’s relationships with God, family and friends.

Even as a child, I knew enough world history to see how anger can turn deadly: leading to outrage, violence and war. In the first chapters of the Bible, the story of Cain killing Abel makes it clear that anger is dangerous and can become deadly.

Throughout the Scriptures, we’re told to be slow to anger. As humans, we’ve been struggling with this powerful emotion since the beginning of time. In the Sermon on the Mount, Jesus instructed that “whoever is angry with his brother shall be liable to judgment” (Mt 5:22).

Church tradition teaches “if anger reaches the point of a deliberate desire to kill or seriously wound a neighbor, it is gravely against charity; it is a mortal sin,” as the Catechism of the Catholic Church says (No. 2302).

So is the answer to avoid anger completely?

No, there is indeed a place for righteous anger. We know Jesus expressed his fury when the Temple was turned into a marketplace (Mt 21:12-13) instead of a place for prayer. Jesus is without sin: What does his behavior in the Temple teach us about anger?

First, it isn’t sinful to feel anger. Like other emotions, anger is neither good nor bad: All emotions are neutral. In fact, it’s healthy and human to be in touch with our feelings such as anger; it’s ideal to know and understand why and how we each experience anger in our bodies and to recognize its effects on us.

Self-knowledge and awareness are spiritual graces that empower us to make healthy choices that help us grow in holiness. Being aware of how we feel emotions — having somatic intelligence — is one of the pathways to that holiness. Many psalms show us this.

God designed our bodies to feel emotions, including anger, so that our brain and body would take in signals about threats to our safety or the well-being of others. When we’re alerted to injustice, adrenaline pumps through our body, tightening our muscles and increasing our heart rate and blood pressure.

For some of us, anger is felt as a raw burning in our throat or chest, like I felt as a child when I was riding bikes with my cousin. For others, anger shows up in the body as clenched fists, tighter muscles and shallow breathing.

Expressing our emotions instead of bottling them up is also part of God’s design. We know that suppressing our emotions can cause illness. Medical research reveals that if anger is pent up, physical pain worsens. According to the Mayo Clinic, unexpressed anger can lead to high blood pressure, ulcers, heart disease and stroke. From a health perspective, as well as a spiritual one, it’s best to express anger.

As Catholics, we express anger in ways that don’t harm others but work toward the common good. We can protest injustice, contact our representatives in government, demanding justice and freedom for those whose needs are ignored. We can say a powerful “No!” to cultural messages that draw our attention away from anything that doesn’t protect the sacredness of all life.

When it comes to our feelings and behaviors, we are called to imitate Jesus Christ. When Jesus expressed his anger in the Temple, he showed us how anger can be expressed in healthy and holy ways. If we’re loving and strategic, like Jesus, we can upset the status quo and invite people and systems to transform, to better reflect God’s charity and justice.

The Catholic tradition of nonviolent resistance and civil disobedience is rooted in this truth: Creatively and lovingly channeled anger challenges oppression. If expressed well, anger can inspire reflection and conversion. Anger tended to and expressed well can be a powerful force to build up the greater good.

And we can know that God not only understands our strong feelings but has made us in God’s own likeness, including giving us a rich tapestry of emotions to express.

(Sister Julia Walsh is a Franciscan Sister of Perpetual Adoration who is part of The Fireplace Community in Chicago. She serves as a spiritual director and vocation minister. She blogs and podcasts at MessyJesusBusiness.com.)