Anglican theologian explores how we should speak about God - Catholic Courier 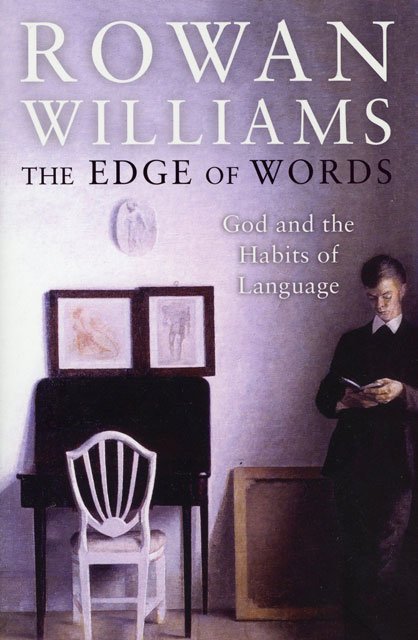 This is the cover of "The Edge of Words: God and the Habits of Language" by Rowan Williams. The book is reviewed by Mitch Finley.

Anglican Archbishop Rowan Williams is the widely respected former archbishop of Canterbury, England, and now master of Magdalene College Cambridge. He is also no slouch as a theologian. In "The Edge of Words," Archbishop Williams addresses the possibility of speaking about God.
Lest the reader think this an odd question, recall that for St. Thomas Aquinas the first thing we must say about God is that we can say nothing, so far transcendent is God to the human intellect. Only after we acknowledge this, Aquinas continued, may we begin to make stuttering attempts to talk about God. Subsequent, more modern thinkers add the insight that all religious language, even in Scripture, is made up of metaphors and analogies, thus nothing we say about God should be taken literally. Indeed, the Catechism of the Catholic Church (No. 40) declares as much.
Metaphors and analogies communicate truth, however, and so we must never dismiss them as they are all we have to talk about God. "If this book persuades some readers to be more puzzled than before over the ways we use language, it will have done part of its work," Archbishop Williams writes. "If it persuades them to listen afresh to how and where the language of faith in communicating God comes in to our habitual speaking, it will have done what I most hope for."
"The Edge of Words" discusses both the importance and the limitations of our words about God. In six concise chapters and an important appendix it provides the groundwork that, the author believes, must be attended to before anyone attempts to develop a new argument for the existence of God. Anyone who reads this book is likely to be left hoping that Archbishop Williams will continue with this next logical step in a subsequent volume.
His book speaks to professional philosophers and theologians, to be sure; but any patient reader willing to follow the author’s line of thought will find his or her effort rewarded abundantly.
– – –
Finley is the author of more than 30 books on Catholic themes, including "What Faith Is Not" (Sheed & Ward) and "The Rosary Handbook: A Guide for Newcomers, Old-Timers, and Those In Between" (The Word Among Us Press).
Copyright © 2023 Rochester Catholic Press Association, Inc. All rights reserved. Linking is encouraged, but republishing or redistributing, including by framing or similar means, without the publisher's prior written permission is prohibited.