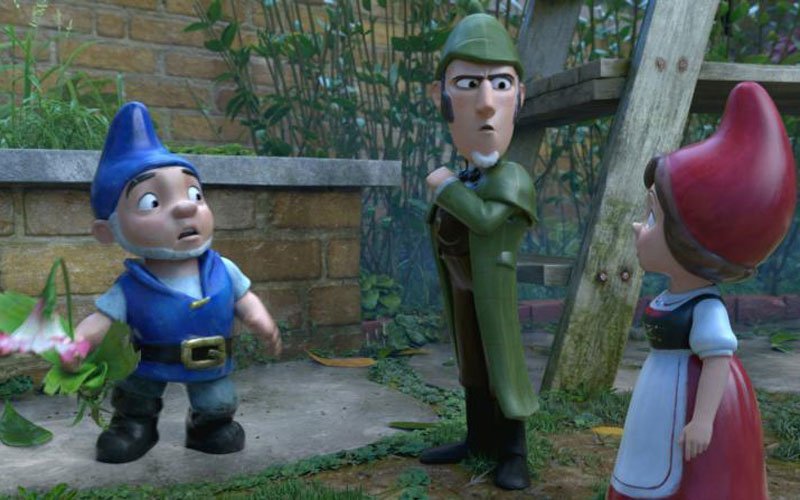 NEW YORK (CNS) — Fans of 2011’s “Gnomeo and Juliet” may be pleased to discover that James McAvoy and Emily Blunt reprise their voice work as that film’s title players in the animated adventure “Sherlock Gnomes” (Paramount).

Alas, they’ll find little else in this busy but flat addition to the franchise to gratify them.

This time out, the couple teams with the movie’s version of Conan Doyle’s famed detective (voice of Johnny Depp) and his sidekick, Dr. Watson (voice of Chiwetel Ejiofor), to stop a spate of garden gnome kidnappings taking place across London that eventually empties the urban backyard the duo now call home of all inhabitants but themselves.

The prime suspect in these crimes is Gnomes’ arch-nemesis, Moriarty (voice of Jamie Demetriou).

Easily satisfied kids may be willing to accept the rudimentary plot and unfocused proceedings that follow this set-up under John Stevenson’s direction. Despite a positive lesson about not taking friends or loved ones for granted, and a momentary nod to empowered women in screenwriter Ben Zazove’s script, however, most others will be unimpressed.

Like the danger in which the sympathetic characters occasionally find themselves, the pair of menacing gargoyles — Reggie (voice of Dexter Fletcher) and Ronnie (voice of Javone Prince) — who guard the mass of abducted figurines may be too frightening for tots. As for parents, they may not find the aptly named Mankini (voice of Julio Bonet) or the equally self-explanatory Barry the Toilet Gnome (voice of Gary Bradbury) much to their taste.

Still, the bathroom humor is restricted to the silly sight of Barry enthroned while the worst of the fittingly cartoonish violence the crime solvers encounter involves one of his adversaries temporarily disabling Holmes by stomping on his leg.

As the cinematic equivalent of the famous dog that didn’t bark in the night — and thereby helped the original Baker Street sleuth solve a crime — “Sherlock Gnomes” won’t keep anyone up at night. But that’s about as much as can be said for it.

The film contains scenes of peril and some mild scatological and anatomical humor. The Catholic News Service classification is A-I — general patronage. The Motion Picture Association of America rating is PG — parental guidance suggested. Some material may not be suitable for children.