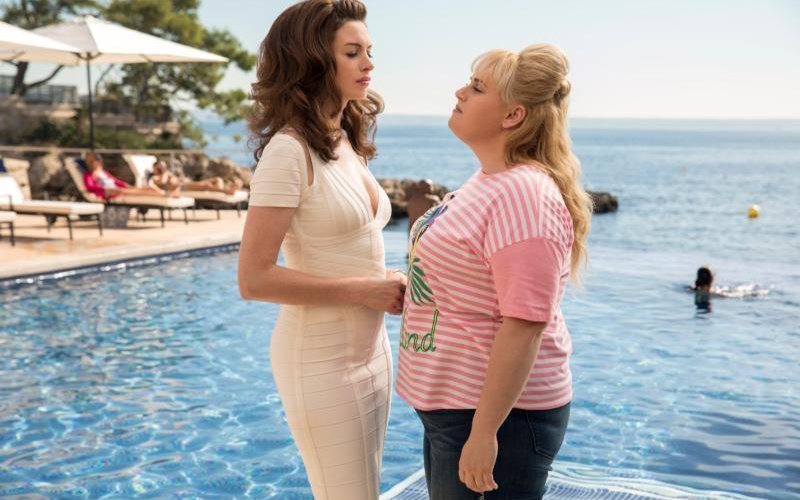 Anne Hathaway and Rebel Wilson star in a scene from the movie "The Hustle."

NEW YORK (CNS) —  “The Hustle” (MGM) suffers from being a mechanical ride, punctuated by occasional attempts at crass humor, through a plot based on outdated notions of cleverness and sophistication. It’s a gender-swapped remake of 1988’s “Dirty Rotten Scoundrels,” which itself was based on a 1964 comedy, “Bedtime Story.” And the roots show..

Director Chris Addison, working from a script by Jac Schaeffer, relies on hit-or-miss sight gags instead of wit. As a result, the story comes off as not quite chic, falling short of the contemporary feminine empowerment it hints at conveying.

It also savors of reheated leftovers, with some set pieces from the older films — both scripted by Stanley Shapiro and Paul Henning with Dale Launer joining them for “Scoundrels” — faithfully reproduced.

Anne Hathaway is the sophisticated Josephine, making a dishonest living out of bilking gullible older men, which pays for her lavish lifestyle on the French Riviera. Rebel Wilson is bumptious small-time grifter Penny, who works up convincing pleas for sympathy for smaller stakes and mostly just talks about her hyperactive libido.

At times competitors, occasionally allies, they finally work out plans to scam $500,000 from Thomas (Alex Sharp), a nerdy, feckless American they’re convinced is a multimillionaire tech mogul. If predictability was the goal here, the filmmakers have succeeded in spades. The schemes concocted by Josephine and Penny are complicated, relying on Josephine’s employees and an astonishing range of costume changes.

The duo is sometimes pursued by hapless police. But they never face justice since the whole idea is that their victims will never report them.

As Josephine observes, “It comes down to one immortal truth: men will never believe a woman is smarter than they are.” And that stale hors d’oeuvre constitutes this spiritless movie’s skewed “moral lesson.”

The film contains an implied casual sexual encounter, some crude banter, a single profanity and fleeting rough language. The Catholic News Service classification is A-III — adults. The Motion Picture Association of America rating is PG-13 — parents strongly cautioned. Some material may be inappropriate for children under 13.