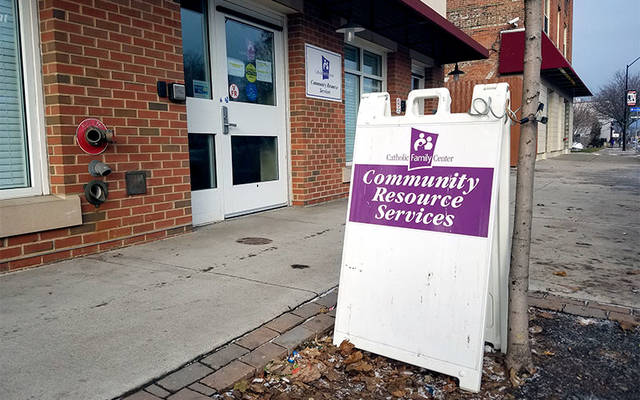 Last spring four individuals were facing urgent financial crises. They were hard-working people who were doing their best to stay afloat, yet they were not finding success and turned to Catholic Family Center’s Community Resource Services for help.

The agency’s staff provided each of them with one-time emergency financial assistance so they could resolve their crisis, and by late fall these four individuals had achieved financial stability, according to Alex Turner, Community Resource Services’ program director. This newfound financial stability was celebrated with a graduation ceremony of sorts at Community Resource Services in November.

“One of them had gotten a promotion in their job, and another one had been able to save a good chunk of money,” Turner said. “Just a couple hundred dollars saved, but that’s the difference between them being able to get through the next challenge on their own or needing help again.”

The average amount of the financial assistance that Community Resource Services provides for a family in financial crisis is approximately $700, Turner noted.

“That’s how much it takes generally to resolve a situation where someone is at risk of homelessness if they don’t get into an apartment or resolve a rental arrears situation,” he explained.

Community Resource Services, which is Catholic Family Center’s emergency-services program, also provides food to families in need in Monroe County. The program is one of many that have historically received funding from the annual Catholic Courier/Catholic Charities Christmas Appeal, which for 50 years has raised money for the emergency funds of various Catholic Charities agencies and other ministries throughout the Diocese of Rochester’s 12 counties.

The 2018-19 appeal raised more than $39,000, and the 2019-20 appeal launched in November with a goal of $45,000. Contributions to the appeal will be accepted through the end of February 2020. Some donors make large contributions, while others donate just $5, according to Chloe Longabaugh, appeal coordinator and circulation coordinator for the Catholic Courier and El Mensajero Cat√≥lico newspapers.

In a similar way, just a relatively small boost from Community Resource Services can be life-changing for the people it serves, Turner said. In an average year approximately 1,500 seek financial assistance from Community Resource Services, and after a careful screening process, the agency usually is able to provide this assistance to between 100 and 200 people a year. The agency’s staffers try to refer those they are unable to help to other local resources.

“We’re looking for situations where we can help build someone’s stability by resolving a crisis,” Turner explained. “We have to really focus on the folks that we can make a difference for. We’re looking for one-time assistance situations.”

One such situation, for example, might be a person who lost his or her job and managed to find a new one, but was unable to make rent payments during the period in between jobs. Community Resource Services could help such an individual pay the past-due rent money and avoid eviction, Turner said. The agency also has helped individuals who had housing and jobs, yet needed vehicle repairs in order to keep those jobs and continue to afford their housing, he said.

“There are definitely as many different situations as there are people,” Turner said. “I would say probably the most common situation that we see is folks that are working and have lost hours or had some illness or had a family emergency, a sick child, maybe just had a new child, and those things keep them from working or reduces their income or takes up a large chunk of their income, and that’s what causes them to come in.”

Community Resource Services caseworkers stay in touch with individuals and families for six months after they receive financial assistance, and plan regular graduation ceremonies for them when they achieve financial independence, Turner said.

“We’ve watched families in our case-management program finish their schooling, expand their income and create a foundation of savings that will keep them stable for years to come,” he said.

Community Resource Services also helps families and individuals in urgent need of food. Just like with the financial-assistance component of the program, a little bit can go a long way when it comes to food as well, Turner said.

“Thanks to food donations and our partnership with Foodlink, we are able to provide meals very affordably to the families we serve. Fifteen dollars allows us to serve a family of four from our pantry with three days of food,” Turner said.

EDITOR’S NOTE: Contributions made payable to Christmas Appeal may be sent to the Catholic Courier, PO Box 24379, Rochester, NY 14624. Please include your name, address, city, state, ZIP code, telephone number, and whether the gift is being made in honor or in memory of someone.