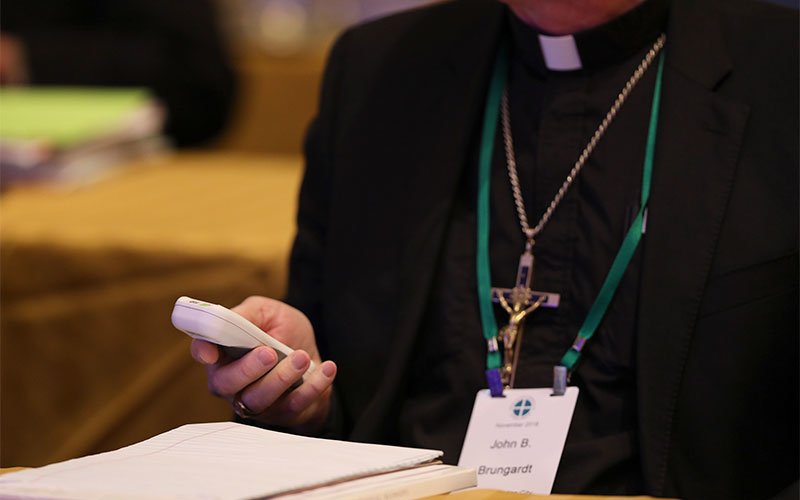 Bishop John B. Brungardt of Dodge City, Kan., votes Nov. 14, 2018, during the fall general assembly of the U.S. Conference of Catholic Bishops in Baltimore. (CNS photo by Bob Roller)

U.S. bishops to meet virtually, not in person, in November

WASHINGTON (CNS) — U.S. Catholic bishops will address the recent Vatican report on former Cardinal Theodore E. McCarrick when they gather Nov. 16 and 17 for their annual meeting, taking place in an online format this year because of the coronavirus pandemic.

A revision to the agenda issued in a Nov. 13 news release by the U.S. Conference of Catholic Bishops shows a change to reflect that “changes were made in the schedule in order to accommodate a discussion by the bishops on the Holy See’s report on Theodore McCarrick.”

“Additionally, the bishops will hear a report from the National Review Board, which advises the Committee on the Protection of Children and Young People on matters of child and youth protection, specifically on policies and practices,” the press release said.

In what is undoubtedly one of the largest virtual gatherings of Catholic bishops in the world, more than 300 prelates are expected to log on for the two-day meeting with plenary sessions to be livestreamed from 1 p.m. to 5 p.m. Nov. 16 and from 1 p.m. to about 3 p.m. Nov. 17, both Eastern Standard Time, to accommodate the variety of time zones.

The sessions will be livestreamed at www.usccb.org/live via a YouTube channel.

“Hopefully, this is the only (annual bishops’ meeting) we have to do this way, but you never know,” said James Rogers, chief communications officer for the U.S. Conference of Catholic Bishops in a Nov. 10 interview with Catholic News Service.

The online format becomes a challenge at a time when the prelates are expected to discuss some of toughest issues affecting the world, the nation and the church, and it comes days after the release of the extensive report detailing McCarrick’s ascent to power in the church despite abuse allegations against him.

The last time bishops gathered physically as a group in Baltimore in November 2019, some bishops protested the delay of the report, whose publication back then was believed to be imminent.

It was released Nov. 10 and with 460 pages, it’s hard to gauge what and how it will figure into the online meeting.

U.S. bishops canceled a meeting in June because of the pandemic and have been finding ways to conduct regular business online given the unusual circumstances, including voting by mail for at least one committee chairman and several chairmen-elect.

They also will be voting by email on action items on the agenda, including approval of the 2021 budget, approval of the next cycle of the strategic plan, and the reauthorization of the Ad Hoc Committee Against Racism, Rogers said.

“This meeting really is about the most essential business,” Rogers said.

The public will be able to watch the meeting, as in the past.

Some of the discussion will include what the church is trying to do to help and how she herself has been impacted, he said.

“I know it is the desire of the bishops to have this moment among themselves and to try as best they can to share this moment with the church in the United States,” Rogers said. “I think the challenge for the meeting in this time of physical distance is to find spiritual nearness. We’re physically apart, but we need to be spiritually near.”

Though, for now, that needs to be done through technology, and because of the sheer number of bishops, accommodating them all on one screen is impossible. Instead, the meeting will look like a broadcast of one, as they take turns speaking from their respective locales.

Though there might be some challenges, many bishops already have become used to meeting online, Rogers said. Some have met online for regional meetings as well as at home as the pandemic forced many to run their respective dioceses via livestreams and other forms of video.

“They have some degree of practice,” Rogers said.