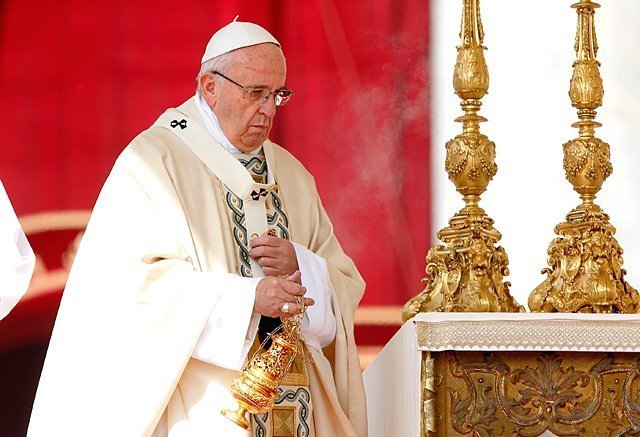 Pope Francis uses incense as he celebrates Mass on the feast of Divine Mercy in St. Peter's Square at the Vatican April 3.

VATICAN CITY (CNS) — When people do not want to say "yes" to God, they usually do not say "no," they just hide like Adam and Eve did after they sinned, Pope Francis said.

"Today is the feast of ‘yes,’" the pope said during his early morning Mass April 4, the transferred feast of the Annunciation. The Latin-rite church usually celebrates the Angel Gabriel’s annunciation to Mary March 25, but transfers the feast when it occurs during Holy Week.

A group of priests celebrating the 50th anniversary of their ordinations and a group of Vincentian Sisters who are called to renew their vows each year joined Pope Francis for the Mass in the chapel of the Domus Sanctae Marthae.

Even after the sin of Adam and Eve, the pope said, God continually reached out to holy men and women — from Abraham to Moses to the prophets — asking them to cooperate in his plan of salvation.

"Today the Gospel speaks to us of the end of that ‘yes’ chain and the beginning of another" with Mary’s willingness to carry God’s son, he said. "With this ‘yes’ God not only watches how humanity is proceeding, he not only walks with his people, but he becomes one of us and takes on our flesh."

Jesus himself is God’s "yes," the pope said.

The feast of the Annunciation, he said, is a perfect occasion to think about one’s life and whether or not "we always say ‘yes’ or often hide, with our heads down, like Adam and Eve," not exactly saying "no," but pretending not to know what God is asking.