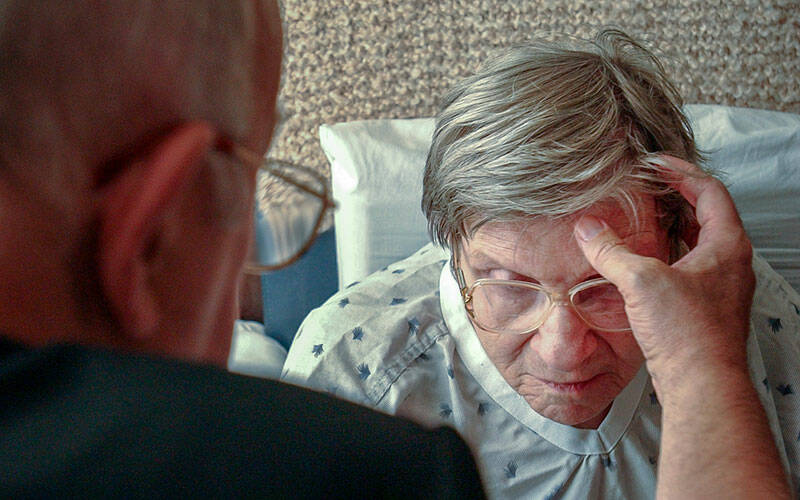 Is the sacrament of the anointing of the sick strictly reserved for people on their deathbeds, or is it also for those with minor ailments?

Neither, according to Father Michael Witczak.

“I think a lot of Catholics still have embedded in the back of their brain that this is a sacrament for when you’re dying. It’s not,” said Father Witczak, who teaches a course on the anointing of the sick at Catholic University of America in Washington, D.C. “It’s meant for people who are seriously ill, but it’s not meant necessarily for those who are on their deathbed. It’s not for headaches, it’s not for (when) you stub your toe.”

Anointing of the sick is for those facing serious illness, major surgery

The anointing of the sick is for someone who is in danger of death due to serious illness, old age or serious surgery, Father Witczak said.

“That doesn’t mean that death is imminent right then and there,” noted Father Peter Van Lieshout, professor of theology at St. Bernard’s School of Theology and Ministry in Pittsford. “It can be a remote danger of death, (where) the condition is serious but we don’t expect it any time particularly soon.”

It’s best for such a candidate to receive the sacrament soon after receiving a serious diagnosis, Father Witczak added.

“A good time to get the sacrament of the sick (would be) at the beginning of the diagnosis, rather than when you’re on your deathbed and you’re all hooked up to tubes and monitors, so that you and your family and friends can be a part of the celebration,” he said.

Jesus instituted the anointing of the sick, which was perpetuated by early Christians

To truly understand the purpose of the sacrament, it’s first necessary to look at its origins. Like all sacraments, the anointing of the sick was set up by Jesus himself, Father Van Lieshout explained. The precursor to the sacrament is found in Gospel accounts of Jesus giving his apostles the authority to heal the sick by anointing them with oil, he said.

Jesus must have fully instituted the sacrament at some point during his pubic ministry because it’s described in the New Testament letter from St. James to the early Christians, Father Van Lieshout added.

“James says … are there any sick among you? Let them send for the priests of the church and let the priests pray over them, anointing them with oil in the name of the Lord, and the prayer of faith will save the sick persons and the Lord will raise them up. If they have committed any sins, their sins will be forgiven,” Father Van Lieshout said.

Today, conferring the sacrament often begins with a call for a priest, just as it did in the days of the early Christians, he noted. If the person receiving the sacrament is conscious, he or she typically will be invited to first confess sins to the priest and receive the sacrament of reconciliation, he said. Then the priest prays over and anoints the person’s forehead and hands using the Oil of the Sick, which is one of the three oils blessed by the bishop each year during the Chrism Mass, Father Van Lieshout said.

The sacrament’s purpose is not to bring about miraculous physical healing, although God certainly could do so, he added. Rather, the primary purpose of anointing of the sick is to bring about spiritual consolation for someone facing serious illness or approaching death, he said. A person at that point may be reflecting upon the sins he or she has committed over the years, which can be “very disconcerting for someone who is approaching what could be their final illness,” Father Van Lieshout said.

Reception of the sacrament brings about forgiveness of an individual’s sins, even if the person is unconscious, as long as the person desires to receive the sacrament and feels sorrow for his or her sins, he added. The sacrament prepares the recipient to face the future with a strength and confidence that comes from Jesus, he said.

It strengthens the person physically and mentally because it banishes the sense of alienation frequently felt by those suffering from serious illness and reaffirms the individual’s role as a member of the body of Christ, Father Witczak said.

The act of being anointed with oil, just as with the kings in the Old Testament, reaffirms the dignity of even the most infirm person, noted Apolonio Latar III, a theology professor at St. Bernard’s School of Theology and Ministry in Pittsford.

“To die with dignity is to be affirmed by another, to die with a presence who knows and loves him deeply,” Latar said.

EDITOR’S NOTE: Why Do Catholics…? is a feature series that aims to answer questions about what Catholics do and believe. To suggest a question to feature, email newsroom@catholiccourier.com.

Tags: Health and Wellness, Why do Catholics?
Copyright © 2022 Catholic Courier, Inc. All rights reserved. Linking is encouraged, but republishing or redistributing, including by framing or similar means, without the publisher's prior written permission is prohibited.