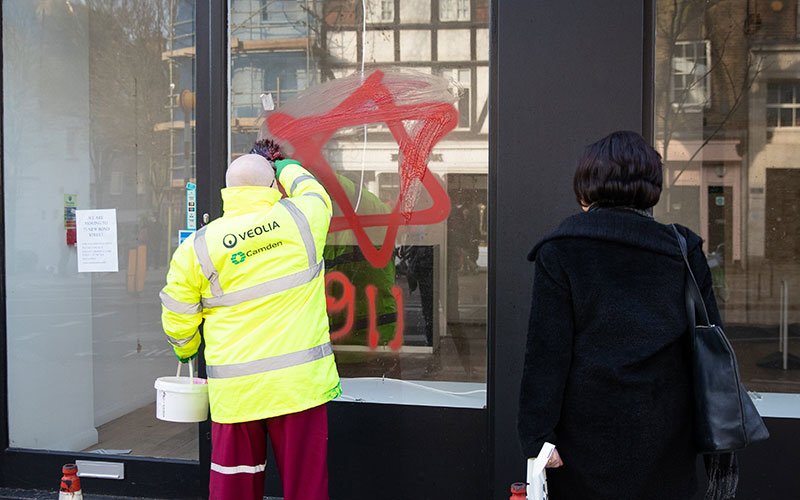 A worker removes antisemitic graffiti on a shop window in the Belsize Park neighborhood of London Dec. 29, 2019. (CNS photo by Aaron Chown/Reuters)

PHILADELPHIA (CNS) — Scholars of Jewish-Christian relations are urging churches in the U.S. to “a national reckoning of the soul” amid what they are describing as “the greatest crisis of public antisemitism in a century” in the U.S.

The Council of Centers on Jewish-Christian Relations issued a Dec. 14 statement calling on churches “to take concrete actions at this critical moment” and “redouble efforts to denounce antisemitism publicly.”

The statement, “A National Reckoning of the Soul: A Call to the Churches of the United States to Confront the Crisis of Antisemitism” was unanimously endorsed by 30 of the group’s member organizations, most of which are based at colleges and universities throughout the U.S. and Canada.

Multiple data sources confirm a sharp rise in antisemitic incidents in recent years throughout the nation. The Anti-Defamation League Center on Extremism reported a 34% increase from 2020 to 2021, which saw the highest number on record since the group began its monitoring in 1979.

FBI director Christopher Wray said in a Nov. 10 address to the Anti-Defamation League that “a full 63% of religious hate crimes (in the U.S.) are motivated by antisemitism,” targeting “a group that makes up just 2.4%” of the U.S. population.

U.S. bishops issued a statement on the reemergence of antisemitism

On Nov. 28, the U.S. bishops issued a statement deploring the “reemergence of antisemitism in new forms,” while affirming the “shared spiritual patrimony” between Catholics and Jews emphasized in the Second Vatican Council’s declaration “Nostra Aetate.”

Yet “we are living in a strange time when there is both a blessed and growing friendship between Christians and Jews alongside a resurgence of antisemitism and neo-Nazism,” said the statement by the Council of Centers on Jewish-Christian Relations, noting “so-called ‘Christian’ nationalists openly declare that true Christians hate Jews.”

In addition, “entertainers, athletes, media personalities (and) politicians … are using 21st-century technologies to spread antisemitic lies and conspiracies to millions of people,” it said.

Recognizing “the Jewishness of Jesus (as) a historical fact … invalidates claims that Christians must oppose Jews and Judaism,” said Philip Cunningham, professor of theology and co-director of the Institute for Jewish-Catholic Relations at St. Joseph’s University in Philadelphia. The university group is a member of the Council of Centers on Jewish-Christian Relations.

In a 1975 statement on Catholic-Jewish Relations, the U.S. bishops lamented that “Christians have not fully appreciated their Jewish roots,” due to a “de-Judaizing process” in early Christian history that “dulled our awareness of our Jewish beginnings.”

“The fact that Jesus’ own spirituality was thoroughly Jewish contradicts the idea that the Old Testament is obsolete,” said Cunningham. “That is why it is part of the Christian Bible.”

U.S. bishops provided specific guidelines on the presentation of Judaism in Catholic preaching

As part of the ongoing implementation of “Nostra Aetate,” the U.S. bishops in 1988 issued the document, “God’s Mercy Endures Forever,” which provided specific guidelines on the presentation of Jews and Judaism in Catholic preaching.

Cunningham said scriptural readings and lessons should not be “framed in such a way as to either reduce the Old Testament to a mere preparation for Christianity, without any subsequent value for either Jews or Christians.”

He pointed to St. John Paul II’s 1997 address to the Pontifical Biblical Commission, where the pope said Jesus was “an authentic son of Israel” who “nourished his mind and heart” with the Hebrew Scriptures.

The relationship between Jews and Christians “has progressed to the point where many … are able to see the holiness and richness of each other’s traditions,” said Adam Gregerman, an associate professor at St. Joseph’s University and co-director of the school’s Institute for Jewish-Catholic Relations.

“We can learn from each other’s ways of reading sacred texts, even if they differ from our own, and even with historically divisive texts such as the writings of the prophets.”

“We also can learn from each other’s teachings about ethical living, above all, how we treat all people as made in the image of God.” he added.

Tags: Antisemitism, USCCB
Copyright © 2023 Catholic News Service, Inc. All rights reserved. Linking is encouraged, but republishing or redistributing, including by framing or similar means, without the publisher's prior written permission is prohibited.