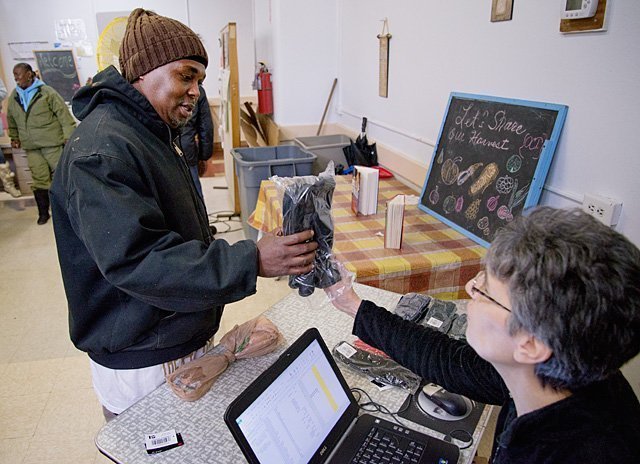 If every Catholic household in the 12-county Diocese of Rochester donated as little as a $1, the 44th-annual Catholic Courier/Catholic Charities Christmas Appeal would easily surpass its goal.

Last year, the appeal received donations from 551 people. Solicitation mailings went out to more than double that number and several articles — accompanied by donation coupons — were included in issues of both the Courier and El Mensajero Cat√≥lico between November and February, said Donna Stubbings, the appeal coordinator and circulation manager for the two newspapers. Donations ranged from $5 to $1,200, and the average donation was $73, she explained.

But the appeal is so important because it helps those people in our community who likewise are stretched to the limit and beyond, needing just need some short-term relief to help them get back on their feet, added Bobbi McGarrity, senior case manager for Rochester’s Catholic Family Center.

“We’ve shifted our focus to meeting basic needs with the appeal,” she said. “Our focus has been on rental payments and eviction prevention.”

For example, she said clients who have been laid off from work may need help paying the rent until they find new jobs. Or, a person may be forced to leave the substandard housing in which he or she has been living, but cannot afford the security deposit or the first month’s rent required by most landlords, McGarrity said.

“Our goal is to prevent people from going homeless,” she noted.

This year’s Christmas Appeal began Nov. 1 and will run through the end of February. The goal again this year is to raise a total of $50,000, Stubbings said.

Last year’s Christmas Appeal raised $40,264, which was distributed to the emergency funds of various Catholic Charities offices and other affiliated agencies throughout the diocese.

The Christmas Appeal enables Catholic Charities agencies to respond to a broad range of individual and family needs all year long, noted Karen Franz, general manager and editor of the Catholic Courier and El Mensajero Cat√≥lico. In addition to housing assistance, appeal funds help people in need pay for prescription medications and provide food vouchers in certain cases or during the holidays, McGarrity noted.

The appeal also is “different from many solicitations readers receive at this time of year because it provides direct, concrete, short-term assistance to local people who have nowhere to turn when they need to make a security deposit on a safe apartment, get medicine for their kids or find transportation to work,” Franz said.

And thanks to the administrative and promotional support provided by the Courier and El Mensajero, nearly every penny of donations received goes toward getting people back on their feet, she added.

“Thousands of readers have generously supported the appeal but as longtime supporters age and are unable to give as much, annual receipts have declined,” Franz noted. “Unfortunately, the need for Christmas Appeal funds keeps growing, so we sincerely ask Courier readers to consider making or increasing their gifts this year.”

Appeal organizers also have tried to broaden their outreach through two initiatives that debuted in recent years. On Dec. 11, the appeal will once again be part of “ROC the Day,” a one-day, communitywide fundraising event to benefit nonprofit groups. While that initiative raised more than $2,100 for the Christmas Appeal in 2011, donations declined to $578 last year, Stubbings said. She said she hopes donations will rebound from last year, when many people focused their donations on Hurricane Sandy relief.

Also in support of this year’s appeal, a Feb. 22 bowl-a-thon also is being planned at L&M Lanes, 873 Merchants Road, Rochester. Details on the event will be announced shortly, Stubbings said. For updates on both initiatives, visit www.facebook.com/CatholicCourierChristmasAppeal.

EDITOR’S NOTE: Donations to the Christmas Appeal may be sent to the Catholic Courier, PO Box 24379, Rochester, NY 14624. Please include your name, address, city, state, ZIP code, telephone number, and whether the gift is being made in honor or in memory of someone.