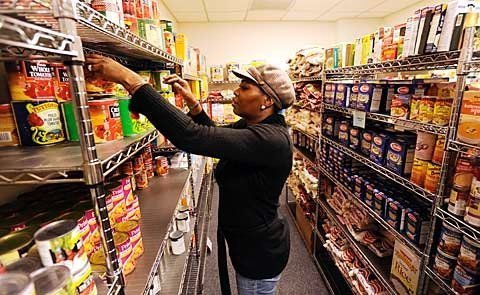 ROCHESTER — Catholic Family Center’s Bobbi McGarrity and Margy Shavick are in the business of helping people who “fall through the cracks.”

McGarrity, Shavick and their colleagues in CFC’s Community Resource Services help individuals and families who need everything from food, clothing and shelter to prescriptions and service referrals. Sometimes their work is life-saving, noted Shavick, citing a recent case in which CFC provided funds that enabled a mother to purchase a much-needed prescription for her asthmatic daughter. The mother had signed up for health insurance, but the plan had a mandatory waiting period before taking effect, and her daughter’s illness couldn’t wait, Shavick added.

“We’re the place where people come to fill the gap,” she said.

Funds from the 2010-2011 Catholic Courier/Catholic Charities Christmas Appeal play a critical part in allowing CFC to fill that gap. The annual appeal, now in its 41st year, raises money for Catholic Charities agencies and parish-supported ministries that help people facing financial emergencies and other crises. Organizers hope to raise $50,000 through this year’s appeal.

Catholic Family Center caseworkers distribute the agency’s portion of appeal funds in grants of varying sizes. They might distribute several hundred dollars to one family to cover back rent or a few dozen dollars to another family for the cost of a prescription. Appeal funds sometimes are used to purchase bus passes to provide transportation for individuals who need to go to job interviews, doctor appointments or social-service appointments. Sometimes CFC caseworkers even have given bus passes to individuals needing to visit the Community Resource Services food pantry, located on 30 Hart St. in Rochester.

The agency can’t provide bus passes to all of its clients, but Christmas Appeal funds enable caseworkers to do so when the situation warrants, she added.

“Sometimes people just need someone to cut them a break and give them help,” she said.

Catholic Family Center’s Community Resource Services encompasses a variety of programs intended to assist individuals and families with such needs as obtaining food, clothing and prescriptions and avoiding eviction, but many of those programs have strict criteria on who is eligible for aid and how much assistance may be provided, McGarrity said. Christmas Appeal funding is unique in that it doesn’t carry such stipulations.

“So we can be a little more flexible for people who fall between the cracks,” McGarrity said.

This flexibility recently allowed CFC caseworkers to help an employee of the Rochester City School District who was laid off over the summer and thus was unable to pay his rent, she explained. The gentleman wasn’t eligible for unemployment over the summer and had earned too much during the school year to qualify for public assistance. Unsure where else to turn, the man came to Catholic Family Center and received $500 in Christmas Appeal funding, which allowed him to pay his back rent and remain in his home until he was re-hired in the fall.

“And now he knows he needs to save a little bit more during the school-year months,” McGarrity added.

The lack of restrictions does not mean Christmas Appeal funds are distributed carelessly, however. On the contrary, McGarrity said such flexible funding is rare, which makes it that much more precious to caseworkers, who have to navigate a multi-step process to gain approval for using Christmas Appeal funds.

“We are very careful with (Christmas Appeal money) because it’s so valuable to us. It’s special,” Shavick added.

Many Christmas Appeal recipients don’t fit the stereotypical image of a person in need, she said, noting that one recent visitor to the food pantry was a woman who owned a small business with her husband. By the time they purchased health insurance, they had no money left for food and were forced to turn to Catholic Family Center. The agency also is seeing a growing number of clients coming from the suburbs, probably because Catholic Family Center is one of the few agencies that doesn’t restrict its assistance to those within certain ZIP codes, McGarrity remarked.

EDITOR’S NOTE: Contributions to this year’s campaign will be accepted through February 28. Click here for a convenient donation form.