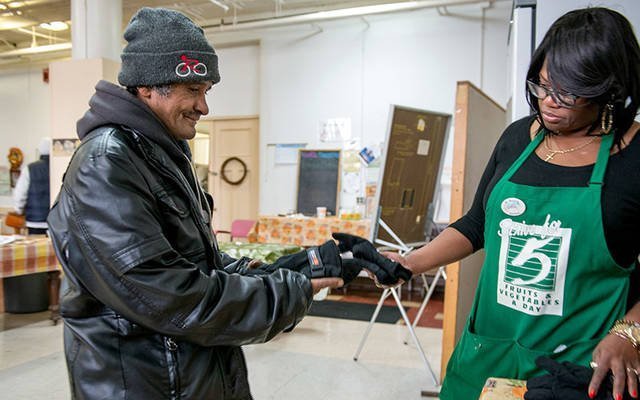 For the past 35 years, St. Peter’s Kitchen has been a second home to people in need on the Rochester’s west side.

“It’s a place of consistency, compassion and acceptance,” explained Patricia Lorenzen, the ministry’s program director. “It’s a place where they can go relax for an hour each day before they have to tackle all the issues that they have to deal with every day.”

Located on Brown Street in Rochester, St. Peter’s Kitchen provides warm meals, along with hats and gloves, to people in need. Throughout the month of December, the ministry’s volunteers will hand out on average 170 pairs of gloves to its guests. The ministry, which serves free and nutritious lunches five days a week to those in need, purchased the gloves using a $600 Hunger Relief Grant that is funded in part by the annual Catholic Courier/Catholic Charities Christmas Appeal.

“So many people (who are guests of St. Peter’s Kitchen) are out on the streets, a pair of decent gloves is important,” Lorenzen said.

St. Peter’s Kitchen has been feeding people and helping to keep them warm for 35 years. In February, the ministry noted its anniversary during a community celebration with Rochester Mayor Lovely Warren and a fundraising gala at Eagle Vale Country Club in Fairport April 1.

Founded in 1982 by Father Richard Czierwin, SSCC, the ministry began as a Saturday soup-and-sandwich program of the former Ss. Peter and Paul Church before becoming a Monday through Friday lunch program. When the church closed in 2006, St. Peter’s Kitchen remained open and continued to serve lunches to those in need. Today, the kitchen serves an average of 130 meals a day, which is down from previous years when the kitchen served about 160 meals a day, according to Lorenzen. While Lorenzen isn’t exactly sure why fewer meals are being served, she believes the availability of mobile food pantries that provide people with fresh produce, fruits, dairy products and other items may be one of the reasons.

“Foodlink is doing a tremendous job of getting foods out to people. They have mobile food pantries that come out to different areas throughout the city either once a week or once a month. They are just giving tons of food away,” Lorenzen said.

St. Peter’s Kitchen hosts a Foodlink mobile pantry on the second Wednesday of each month. In addition to its lunchtime meals and mobile pantry, this spring and summer, the ministry once again planted produce through its community garden, which it established with Foodlink in 2015. This year, Lorenzen said the garden harvested more than 500 pounds of vegetables, which the kitchen used in its own meal program and also gave away to community members. The ministry also provides other services, including a thrift store, a Christmas toy store and meals for the holidays, including Christmas dinner.

The services that St. Peter’s Kitchen provide wouldn’t be possible without the help from volunteers, Lorenzen said. The ministry has more than 150 volunteers and receives calls all the time from people and organizations looking to volunteer with the ministry.

“We are very fortunate. We have a very loyal base,” she said of the ministry’s volunteers.