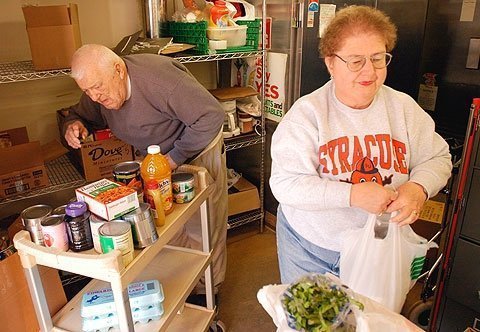 That’s how Sue Norton described the situation at Auburn’s St. Alphonsus Food Pantry in mid-December. The pantry contained just enough food for the 417 Christmas baskets volunteers planned to make right before the holidays, and Norton said she wasn’t sure how she’d be able to restock the pantry’s shelves once Dec. 26 rolled around.

“We’re a little more desperate than we expected to be,” said Norton, coordinator of the food pantry.

Volunteers at the St. Alphonsus Food Pantry made up 475 Thanksgiving baskets and had planned to make up 300 Christmas baskets. When Norton heard, however, of another Auburn food pantry that would not be able to make Christmas baskets for its clients, she agreed to take up the slack.

“One pantry that did Thanksgiving baskets just can’t do Christmas baskets,” she explained. “We’re just doing the best we can and we’re all working together.”

Norton has worked at the food pantry for more than 20 years but said she’s never seen as much need in the community as there is this year.

The poor economy and job market have brought more than a few new faces to her door, she said, sharing the story of one such family. The husband was laid off from his job around the same time his wife’s hours at her own job were cut, drastically decreasing the couple’s income. Many of the St. Alphonsus Food Pantry’s clients have jobs, she said, but they can’t stretch their paychecks far enough to be able to afford to pay their bills and still purchase food.

The food pantry accommodates these people and others in need in Auburn by opening its doors from 9 until 11:30 a.m. every Monday through Saturday. It’s located in two bays — outfitted with freezers, refrigerators and shelving — of the garage across from St. Alphonsus Church, located at 85 E. Genesee St.

“We’re open six days a week. It’s convenient for (the working poor) to come in on Saturday,” Norton said.

The majority of the St. Alphonsus Food Pantry’s inventory is supplied by Food Bank of Central New York, supplemented by food donated by local individuals, clubs and organizations, which often hold food drives to support the pantry. The local grocery stores also keep the food pantry in mind and frequently call if they have food they can’t sell but that is still good, such as day-old bread or food that’s getting close to its sell-by date, she said. Norton takes advantage of sales at area grocery stores to stock up on items the pantry is low on or that people don’t frequently donate. She purchases this food using money the food pantry has received through gifts and grants from local agencies and organizations.

One of these annual grants is a Hunger Relief Grant, which is distributed by Catholic Charities of the Diocese of Rochester and funded in part by proceeds from the Catholic Courier/Catholic Charities Christmas Appeal. Last year 609 people donated to the 2010-11 Christmas Appeal, raising a total of $40,913. The goal of this year’s appeal is $50,000, and the appeal runs through February.