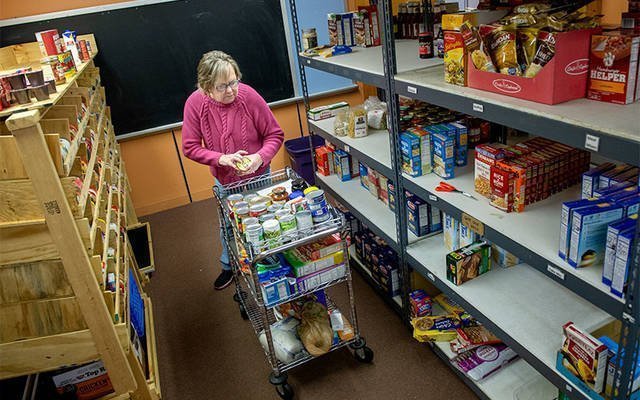 Each year more than 100 families in the Spencerport area are fed through the generosity of others. The members of a handful of area churches regularly contribute nonperishable food items to the Spencerport Ecumenical Food Shelf, which in turn provides food for approximately 120 families each year.

“We feed the people that are in dire need of food in the Spencerport school district, which includes parts of Hilton and Greece and Gates, but it’s mostly in Spencerport,” explained Steve Brown, chair of the food shelf.

For the last several years, readers who contribute to the annual Catholic Courier/Catholic Charities Christmas Appeal also have played a role in helping those families in need. A $1,100 Hunger Relief Grant — which is partially funded by proceeds from the Christmas Appeal — recently helped Brown and his volunteers purchase gift cards for Tops grocery store. These cards in turn were distributed to families along with the nonperishable items to enable the families to purchase such perishable items as meat and dairy products.

The annual Christmas Appeal raises money for the emergency funds of various Catholic Charities agencies and affiliated agencies throughout the 12-county Diocese of Rochester. A portion of the appeal’s proceeds are paired with proceeds from the spring’s Operation Rice Bowl collection and distributed in the form of Hunger Relief Grants to charitable agencies and organizations like the Spencerport Ecumenical Food Shelf.

The Tops gift cards are an important part of the boxes of food distributed through the food shelf. A typical box for a family of four includes such staples as pasta, sauce, cereal, canned vegetables, soup, boxed stuffing and Hamburger Helper mix.

“They get a little bit of everything. A family of four gets about $150 in food plus $40 in gift certificates,” Brown said.

The boxes of food are made up ahead of time by volunteers who gather at Rochester Karen Baptist Church each Thursday morning from 9 to 11 a.m. Food donations also are accepted at this time at the church, located at 4997 Ridge Road West in Spencerport. Each week a volunteer e-mails local churches with a list of food items that are particularly needed, and the congregations publish the lists and collect the items inside their churches.

Families who reside within the boundaries of the Spencerport Central School District and find themselves in need of food are encouraged to call 585-277-4917, which is a pager number. Brown holds the pager and will call back families as soon as he is able.

“We don’t have a place for people to come to, but we deliver. I call people back and take down their name, address and how many are in their family, then I call the driver and tell the driver to go and deliver to the people,” Brown explained

Volunteer drivers make approximately five to 10 deliveries a week, Brown said. Families are allowed to call the food shelf to request food up to four times a year, but they are required to wait at least 60 days in between calls, he added.

Those assisted by the food shelf have run the gamut from senior citizens living alone to young single mothers with two or three children, he said. Volunteers have posted flyers in the local senior center, library and town offices, but most people learn about the food shelf through word of mouth.

“We wonder how many people there are that need food and don’t know about us, but then again, we don’t want 1,000 more families. Then we’d be out of business because we wouldn’t have any more food,” Brown remarked.

EDITOR’S NOTE: Contributions may be made payable to Christmas Appeal and sent to the Catholic Courier, PO Box 24379, Rochester, NY 14624. Please include your name, address, city, state, ZIP code, telephone number, and whether the gift is being made in honor or in memory of someone.