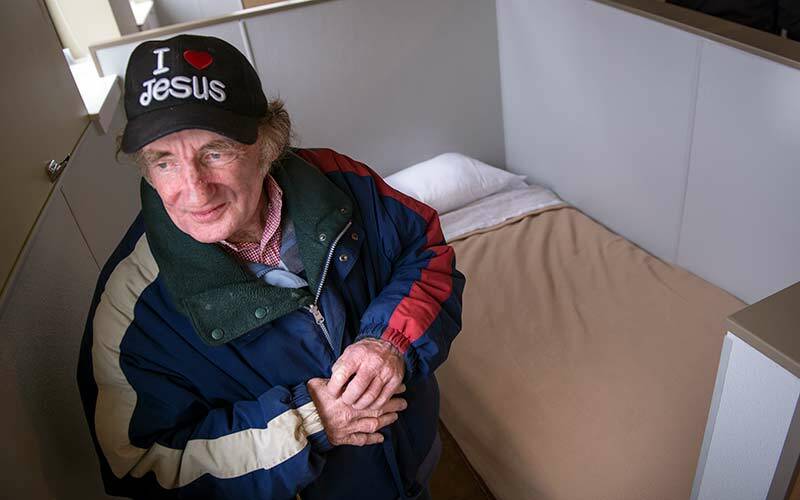 Rochester resident Charlie Lemon looks out of the window near his bed at the House of Mercy on Ormond Street in Rochester March 20, 2017. (Courier file photo)

When asked what a donation of even $25 to the House of Mercy can do, Lisa Knight, the Rochester homeless shelter’s director of community engagement, pondered the thought, then listed a host of ways.

“It could be used to buy meals for our guests, toiletries for those who need them in the community, food to get our food pantry up and running again, and it could also be used to help fund the hire of new staff so that we can open fully,” she said.

Knight said she wants people who support the Catholic Courier/Catholic Charities Christmas Appeal to know that the House of Mercy is open for business again after the tragic stabbing of two guests — one of whom died — led to the homeless shelter’s temporary closure last summer. The shelter, which receives funds through the annual Christmas Appeal, offers free meals, a food pantry, occasional medical care and a variety of other services to the poor and homeless. The ministry experienced a drop-off in donations and volunteers following the tragedy, but it has responded by revamping security, Knight said.

“Everyone goes through security, so no one is bringing in weapons or drug paraphernalia,” she said, noting the shelter operates a 76-bed area divided into separate men’s and women’s sleeping areas, both of which are patrolled by security.

Earl Thomas, the shelter monitor, added that the House of Mercy is a secure haven for all who stay there.

“Everyone gets scanned and checked to come in,” he says. “It makes it really safe for residents to come in.”

The House of Mercy has a history of helping

The House of Mercy is among the most well-known shelters in Rochester and has a long history of serving some of the community’s most marginalized residents.

Established in the mid-1980s by Mercy Sister Grace Miller, with help from the Sisters of Mercy, the shelter was located at two different sites on Central Avenue before moving to Hudson Avenue in 1994.

In 2017, the shelter moved to its current location, a 6,000-square-foot facility on Ormond Street. Over the years, the shelter has served thousands of meals to people, as well as helped many move from a life on the streets to new apartments, houses and jobs.

Shelter employee recalls how the House of Mercy helped him

One person who was helped by the House of Mercy is Thomas, who said he has been sober for more than eight years. He credits his recovery from cocaine and crack abuse in part to the efforts of Sister Miller, who was succeeded by Tammy Butler last March as executive director.

“I was homeless and hooked on drugs real bad,” he said. “Sister Grace helped me to get clean.”

He noted that he chose to work at the shelter first as a volunteer, then as an employee, because he felt it was important to give back to the place which helped him get his life back. Now he said he spends his time “making sure residents are OK,” checking on their needs for socks, towels, clothing and words of encouragement.

People are homeless for many reasons, shelter employees say

Both Thomas and Knight said various types of trauma as well as mental illness and drug addiction afflict a number of the guests at the House of Mercy, and Knight added that more people are now homeless due to rising rents in the city.

Thomas also noted that some guests are bereft of family supports because they’ve “burned too many bridges,” so the House of Mercy may be their best shot at getting help to finally overcome the challenges they face. The shelter employs three social workers to help guests navigate the social welfare system, Knight said, adding that many don’t have health insurance.

Knight said that the House of Mercy could not do its work without the generous financial and volunteer support of from local Catholic parishes, schools and parishioners, as well as numerous individuals, organizations and businesses.

The House of Mercy was set to begin hosting religious services again, and Knight said she hopes to have the ministry fully staffed as soon as possible.

She also urged the diocesan community to continue supporting it as it renews its mission.

“We’ve been a car that’s sitting for a while, and we’re just having to warm up each part of the car,” she said.