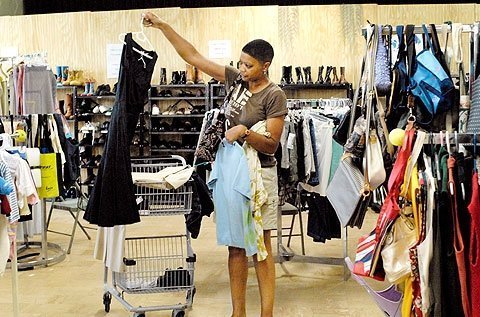 Proceeds from last year’s Catholic Courier/Catholic Charities Christmas Appeal are helping to keep hundreds of people warm this winter, according to officials from two Rochester-based charities that receive funds from the appeal.

The annual appeal, which recently kicked off its 42nd year, raises money for the emergency funds of Catholic Charities offices and affiliated agencies and ministries throughout the 12-county Diocese of Rochester. Last year 609 people donated to the 2010-11 Christmas Appeal, raising a total of $40,913.

Matthew’s Closet, a clothing ministry of Rochester’s St. Frances Xavier Cabrini Parish, recently received a $400 grant funded through Christmas Appeal proceeds, said Paul Robinson, the ministry’s director. The grant money was used to purchase undergarments and winter coats. Matthew’s Closet receives and redistributes many donated articles of clothing, but there still are quite a few things ministry staff and volunteers have to purchase new, he said.

“We don’t distribute used underwear. We buy new underwear, and we buy new socks, because most of the socks we get are pretty ratty,” Robinson said, noting that the ministry often purchases winter coats as well. “We buy children’s winter coats and we also buy adult plus sizes … because we don’t get enough of those.”

Matthew’s Closet spends about $4,000 each year on such supplemental purchases, so the $400 grant covered about 10 percent of that cost this year, he added.

“It’s hard to say what that $400 will specifically go for. It also could go for things like mittens or adult gloves. It just enables us to acquire more,” Robinson explained.

St. Peter’s Kitchen, which serves a free and nutritious lunch five days a week, usually receives between $700 and $800 from Christmas Appeal proceeds, according to Patricia Lorenzen, St. Peter’s program director.

“We use it yearly for men’s and women’s gloves. A lot of our people who are staying in shelters, they have to be on the streets all day. It’s really important to protect their skin,” Lorenzen explained.

Each year St. Peter’s Kitchen volunteers distribute about 170 pairs of gloves to diners, and they try to keep lotion on hand as well, she said. Without funds from the Christmas Appeal, the ministry “absolutely would not” be able to afford to take this extra step to increase diners’ health and comfort, she added.

Both Robinson and Lorenzen said the funds are especially needed this year, as both ministries are seeing an increased number of people seeking help due to the poor economy.

“I think right now we’re running close to 20 percent above what we were doing last year. It’s a factor of the economy. We see a lot of new faces, and we see a lot of repeat clients, too,” Robinson said, noting that one referral will allow a client to visit Matthew’s Closet up to three times per year.

Matthew’s Closet staff and volunteers work with more than 100 different Monroe County-based health-care agencies, social-services agencies and religious agencies that ensure that clients meet specific requirements before referring them to the clothing ministry.

“We’ll have helped 3,200 adults and children by the end of this year. We’ve given away over 40,000 articles of clothing,” Robinson said.

Staff and volunteers at St. Peter’s Kitchen also have noticed an increase in the number of people seeking their assistance, Lorenzen said. As the economy worsens and work is increasingly more difficult to find, more and more people turn to drugs or suffer from depression and other mental-health issues, which only makes their situations worse, she said.

“We’ve probably increased … a good 10 percent, maybe more, and there are a lot of new faces,” she said.