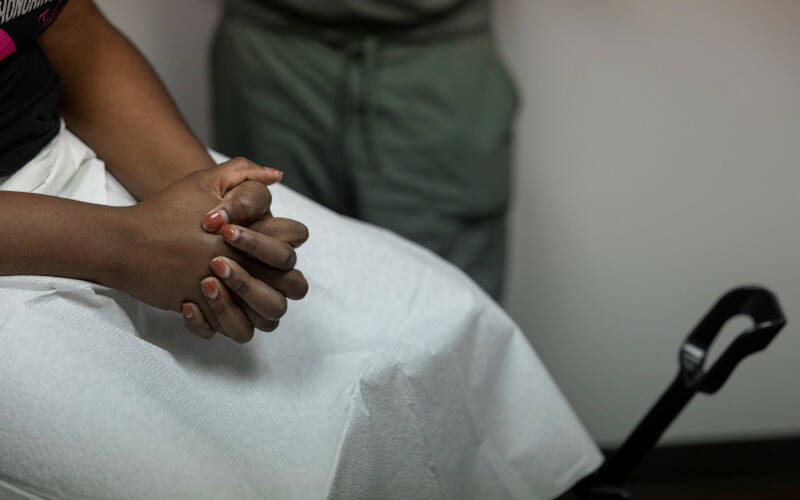 A patient at Houston Women’s Reproductive Services in Texas discusses ultrasound results with a doctor Oct. 1. A U.S. court of appeals temporarily stayed the recent injunction on the Texas abortion law while it reviews the state’s request to reinstate the ban on abortions after six weeks of pregnancy. (CNS photo by Evelyn Hockstein/Reuters)

WASHINGTON (CNS) — A U.S. court of appeals temporarily stayed the recent injunction on the Texas abortion law while it reviews the state’s request to reinstate the ban on abortions after six weeks of pregnancy.

The ruling was issued the evening of Oct. 8 in one-page order by a three-judge panel of the 5th U.S. Circuit Court of Appeals.

This newest order was issued just two days after a U.S. District Court judge had temporarily blocked Texas from enforcing the abortion law.

The appeals court accepted the request of Texas state officials to temporarily set aside the ruling by U.S. District Judge Robert Pitman. This gives the Biden administration — which had sued Texas for its abortion law which it called unconstitutional — until Oct. 12 to respond.

Pitman’s 113-page order Oct. 6 said that once the new abortion law in Texas “went into effect, women have been unlawfully prevented from exercising control over their lives in ways that are protected by the Constitution.”

“This court will not sanction one more day of this offensive deprivation of such an important right,” he added.

The judge also criticized the means of enforcing the new law, saying lawmakers had “contrived an unprecedented and transparent statutory scheme” with its emphasis on private citizens bringing civil lawsuits in state court against abortion providers.

Texas Right to Life called Pitman’s ruling “wildly broad, preventing Texas state officials from enforcing the law, including the shocking prevention to stop Texas elected officials and every Texas judge and court clerk from even receiving lawsuits filed by citizens against the abortion industry.”

They said the latest temporary ruling by the appeals court “optimistically signals how the court may rule on the merits of the case.”

“This is an answered prayer” said Kimberlyn Schwartz, director of media and communication for Texas Right to Life.

She said the state’s new abortion law “saves approximately 100 lives from abortion per day and we’re grateful that this tremendous impact will continue.”

She added that the organization expects the Biden administration to appeal to the Supreme Court on this case and that “Texas will continue to defeat these attacks on our life-saving efforts.”

On Sept. 1, the Supreme Court ruled against blocking the Texas abortion law, which sent the case back to the lower court. The Texas Catholic Conference, the public policy arm of the state’s Catholic bishops, said this action marked the first time since Roe v. Wade that the nation’s high court “has allowed a pro-life law to remain while litigation proceeds in lower courts.”

The Supreme Court has consistently ruled that states cannot restrict abortion before 24 weeks of pregnancy, when a fetus is said to be viable.

On Oct. 12, the court will hear a case from Kentucky’s attorney general, who argues he should be able to defend the state’s abortion law that had been blocked by a lower court.

Last year, a three-judge panel of the 6th U.S. Circuit Court of Appeals, based in Ohio, upheld this decision.

Kentucky Attorney General Daniel Cameron, a Republican, wants to defend the law because the state’s health secretary no longer will do so. Cameron and Kentucky Gov. Andy Beshear, a Democrat, were both elected in 2019 as an appeal was pending.

Beshear named Eric Friedlander as health secretary, and Friedlander defended the law in the courts until the block on it was upheld by the 6th Circuit. He did not file for a review of the ruling by the full 6th Circuit, so Cameron filed a motion to intervene. This procedural move is what was to be argued before the Supreme Court.

On Dec. 1, the court will take up a ban on abortions after 15 weeks of pregnancy in Mississippi.