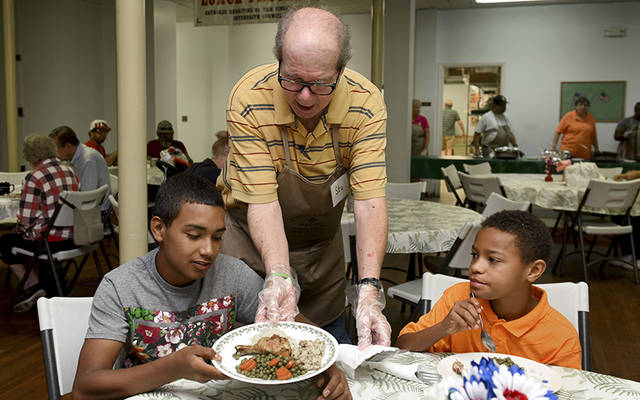 The Geneva Community Lunch Program, a ministry of Catholic Charities of the Finger Lakes, serves about 14,000 free meals a year. Above, coordinator Stu Einstein serves lunch to Aneudi Rivera, 15, and James Taylor, 11 in June 2016.

After Hurricane Maria ravaged Puerto Rico in September, many families fled the devastated island with just the clothes on their backs. Hundreds of these displaced people ended up within the 12 counties of the Diocese of Rochester, and two of those families made their way to Canandaigua, where they sought help from Catholic Charities of the Finger Lakes, according to Ellen Wayne, the agency’s executive director.

The agency’s staff members were able to provide immediate help to those two families and meet their basic needs, thanks in part to the Catholic Courier/Catholic Charities Christmas Appeal, Wayne said.

“Christmas Appeal funds helped provide an immediate place for the families to stay and made emergency food available,” Wayne said. “We worked with the family to link them with services for long-term housing, clothing and other resources to meet their basic needs.”

Now in its 48th year, the annual appeal raises money for the emergency funds of various Catholic Charities agencies, including Catholic Charities of the Finger Lakes. The 2017-18 appeal, which has a goal of $45,000, began at Thanksgiving and runs through February.

The funds raised through the appeal are extremely valuable to the agencies like Catholic Charities of the Finger Lakes, Wayne said.

“The appeal funds always help us meet needs when no other resources are available,” she explained.

Sometimes these funds allow the agency to meet clients’ very specific, one-time needs. Proceeds from last year’s appeal, for example, were used to help a homeless man who suffers from mental illness and struggles to maintain housing and other stable supports in his life, Wayne said. When this man was placed in emergency housing he was exposed to bed bugs.

“Christmas Appeal funds helped to purchase special bedding protectors so that (the man) and his belongings would not be at risk of further infestation,” Wayne said.

In another instance, Catholic Charities of the Finger Lakes’ staff used Christmas Appeal funds to help a man in his 50s who was struggling with several undiagnosed disabilities, which made it hard for him to care for himself and meet his own basic needs, Wayne said. This man lived with his mother until she passed away in August.

“(He) was left to manage the house and was quickly overwhelmed with the tasks,” Wayne explained. “His propane was shut off, leaving him with no heat and no hot water.”

When the man approached Catholic Charities of the Finger Lakes for help, he had been without propane for three months, Wayne said. Case workers were able to use funds provided by the Christmas Appeal to pay for an immediate delivery of propane to the man’s home, thus solving his immediate problem, she added.

“We worked first to address his basic needs, including arranging for a propane delivery, then helped link him with supports for his ongoing health and safety,” Wayne said. “(He) was most appreciative that Christmas Appeal funds helped him have heat and a hot shower.”

Catholic Charities of the Finger Lakes’ staff also used Christmas Appeal funds to help secure emergency housing for an 18-year-old woman. This woman had been living on her own for some time due to an abusive situation, and case workers also were able to connect her with a program for victims of domestic violence. These interventions helped propel the woman down a positive path.

“Today she is living in her own apartment while she works and attends school,” Wayne said.