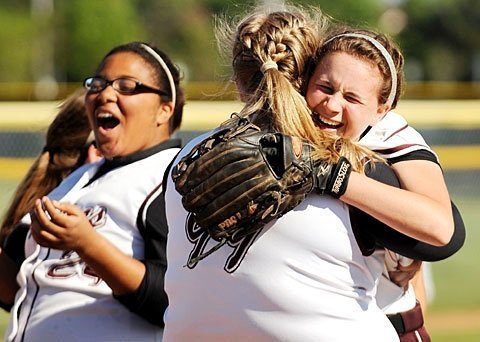 Led by sectional team championships from Aquinas Institute softball and McQuaid Jesuit boys’ golf, as well as numerous individual titles, sports success was in ample supply this spring for Catholic high schools in the diocese.

Proving themselves worthy of their No. 1 seed, the Little Irish won the Section 5 Class B1 crown with a 3-1 victory over second-seeded Penn Yan in the final on June 2. Aquinas scored twice in the third inning and once in the fifth, with Caileen Sennett driving in a run in each of those innings. Pitcher Lexi Haley threw a four-hitter with eight strikeouts, with only an unearned run in the seventh preventing a shutout.

Aquinas’ road to the title game was paved by a 5-2 quarterfinal win over No. 9 Attica on May 29 as Paige Monachino doubled twice and drove in two runs. The Little Irish then won 2-0 over No. 4 Waterloo on May 31 as Haley tossed a two-hitter.

AQ saw its season come to an end in Class B state-qualifier play on June 5. The Irish lost to Class B2 champion Mynderse, 5-4, in eight innings to finish their year with an 18-4 record.

The Knights wrapped up the Section 5 Class A team title with a stalwart performance on May 21 at the Country Club of Mendon. McQuaid totaled 312 strokes, a full 12 shots better than runner-up Pittsford Mendon.

McQuaid was led by Trevor Sluman’s third-place individual finish. He shot a 3-over-par round of 74, while Knight teammate Alex Bourdelais tied for fourth at 77. Other top Knight finishers were Andrew Galvin, who tied for ninth place with an 80; and Michael Caruso, who tied for 15th at 81.