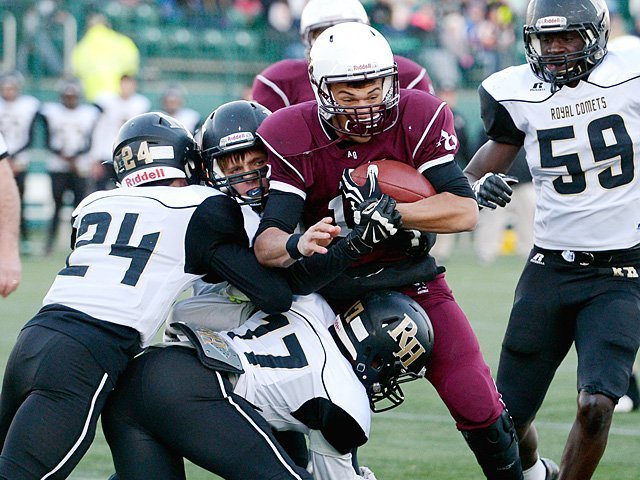 Aquinas quarterback and game MVP Jake Zembiec is taken down by Rush-Henrietta’s defense in the first half of the Section 5 Class AA final Nov. 8.

Aquinas Institute captured the Section 5 Class AA championship, then won its first two state games to earn a spot in the Class AA final. Meanwhile, Bishop Kearney powered to the Section 5 Class D title and advanced to the state Class D final four before being stopped in the semifinal round.

The Little Irish reached the state title game with a 17-16 semifinal win over Liverpool of Section 3 Nov. 21. Aquinas improved its record to 12-0, earning a spot against Saratoga Springs of Section 2 in the Nov. 29 final in a bid to reclaim the Class AA crown last won by the Irish in 2013.

Quarterback Jake Zembiec passed for two touchdowns against Liverpool. His 10-yard throw to Jamir Jones in the first quarter gave AQ a 7-0 lead, and a 32-yard toss to Tyler Olbrich erased a 10-7 second-quarter deficit and put Aquinas up 14-10 at halftime. Collin Cup’s 24-yard field goal in the third quarter — putting the Irish ahead 17-10 — proved vital as Liverpool scored a touchdown with just under four minutes left in the game but fell one point short after its extra-point attempt failed.

Aquinas had reached the state final four with a 42-7 thrashing of Orchard Park of Section 6 in quarterfinal action Nov. 15. Zembiec threw for four touchdowns: to Earnest Edwards, on plays of 52 and 24 yards; to Jones, on a four-yard completion; and to Jason Hawkes, on a 33-yard connection. Olbrich contributed the other two touchdowns on runs of four and seven yards. 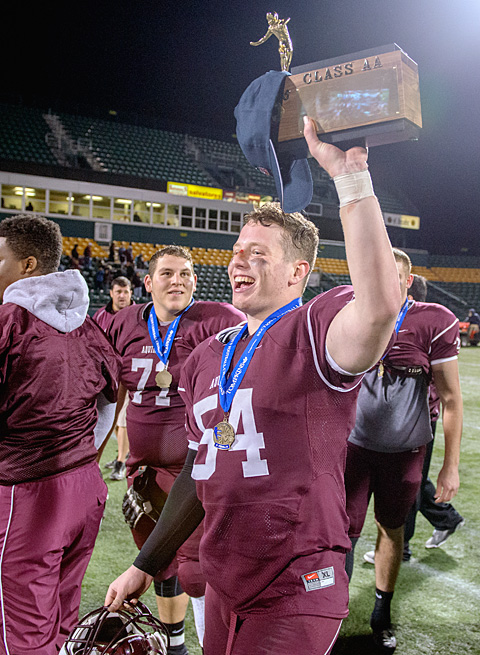 Aquinas senior Conrad Brake hoists the Section 5 Class AA trophy to show off to the rest of the Little Irish.

Prior to states, Aquinas recorded a hard-earned win in the Section 5 Class AA final Nov. 8. The top-seeded Irish edged No. 6 Rush-Henrietta, 17-14, as Cup made a 26-yard field goal early in the fourth quarter to break a 14-14 tie. Other AQ scores were a 13-yard TD pass from Zembiec to Hawkes in the first quarter, and an 11-yard scoring run by T.J. Scanlon in the third period.

That victory was preceded by a 35-14 quarterfinal win over eighth-seeded Fairport Oct. 24 as Zembiec threw for three touchdowns, and a 21-14 semifinal decision over No. 4 Hilton Nov. 1 that saw Aquinas rally from a 14-7 second-half deficit. Zembiec tossed a seven-yard TD pass to Jalen Pickett and then ran two yards for the deciding score, and Taylor Riggins got AQ’s other TD.

In their Section 5 Class D championship game, the fifth-seeded Kings won 46-21 over No. 3 Clyde-Savannah Nov. 7. Quarterback Todd LaRocca had four touchdown passes, and Justin Davis made eight receptions for 133 yards while Dahmir Pross ran for 204 yards on 23 carries.

Previous sectional wins for BK were 38-14 over No. 4 Cuba-Rushford Oct. 23 as LaRocca threw for two scores and rushed for another, and 44-28 over No. 1 Red Jacket in semifinal play Oct. 31 with Pross rushing 23 times for 283 yards and three touchdowns.

Following sectionals, BK had a successful start to state-tournament play Nov. 14 by winning its Class D quarterfinal, 22-12, over Franklinville/Ellicottville of Section 6. Pross ran 21 times for 131 yards and a touchdown, and LaRocca made an 11-yard TD throw to Davis and also ran 18 yards for a score.

Kearney’s season was finally ended in state semifinal play Nov. 20, with a 38-36 loss to Tioga of Section 4 despite a stirring fourth-quarter comeback. The Kings were faced with a 38-20 deficit but battled back as LaRocca and Devin Green hooked up on a 63-yard touchdown play, followed by a one-yard scoring run by LaRocca. Both two-point conversion attempts were successful, bringing BK to within two. The Kings then recovered an onside kick but were unable to score again.

BK’s final record was 9-3 in a memorable season that saw the Kings win their first sectional title since 1989.