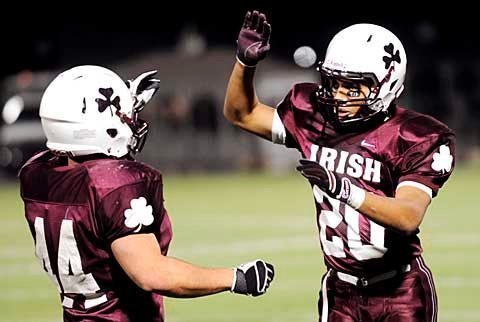 Any player entering the Aquinas Institute football program has pretty high standards to live up to, since Little Irish squads before them earned state championships in 1998, 2001, 2002 and 2007.

The 2010 Irish obviously were undaunted by this lofty history: Not only did they win a state title of their own, they did it with a perfect season.

Aquinas rode off into the sunset with the NYSPHSAA trophy and a final record of 13-0, thanks to a 24-13 victory over Harrison in the state Class A championship game played Nov. 26 at the Carrier Dome in Syracuse. By earning its fifth state crown, Aquinas has won more such titles than any other school in New York since state football playoffs were begun in 1993. The Little Irish also preserved the No. 1 state ranking they had brought into the game.

Aquinas struck first in the title contest against Harrison, a Section 1 school from Westchester County. With 46 seconds remaining in the first quarter, Tim Young ran 31 yards for a touchdown as the Little Irish went up 7-0 for a lead they would never relinquish. That advantage increased to 14-0 at halftime as Cory Benedetto completed a 24-yard touchdown pass to Chris Bostick with 6:59 left in the second quarter.

Harrison cut its deficit to 14-7 when Vinny Nicita threw seven yards to Alex Acompora with 4:46 to go in the third quarter. Aquinas made it 17-7 on Eric Terhaar’s 36-yard field goal with 8:11 remaining in the game.

The Huskies fought back to make it 17-13 with 2:28 to go on a six-yard TD pass from Nicita to Steve Ricciardi. But AQ recovered the ensuing onside kick, and Mike Messina then put the game away on a 50-yard scoring run with 2:08 to go. Messina finished the day with 176 yards rushing on 16 carries to net game Most Valuable Player honors, and the defense did its part with three interceptions while Jarron Jones made 13 tackles, five of which were solo.

Earlier in the state tournament, AQ scored a 36-6 quarterfinal win over Buffalo Sweet Home of Section 6 on Nov. 12. That triumph stopped a 36-game winning streak by the Panthers, who were the two-time defending state champions. The Little Irish then won 35-12 over Whitesboro of Section 3 in semifinal play on Nov. 19.

Aquinas had begun its climb to the state championship by capturing the Section 5 Class A playoffs. The Little Irish, seeded No. 1, edged third-seeded Victor, 10-7, in the title game on Nov. 6 for their fifth straight sectional crown. Earlier in sectionals, AQ won 41-14 over No. 8 Geneva in the quarterfinals on Oct. 23 and 48-21 over No. 4 Canandaigua in semifinal action on Oct. 31.