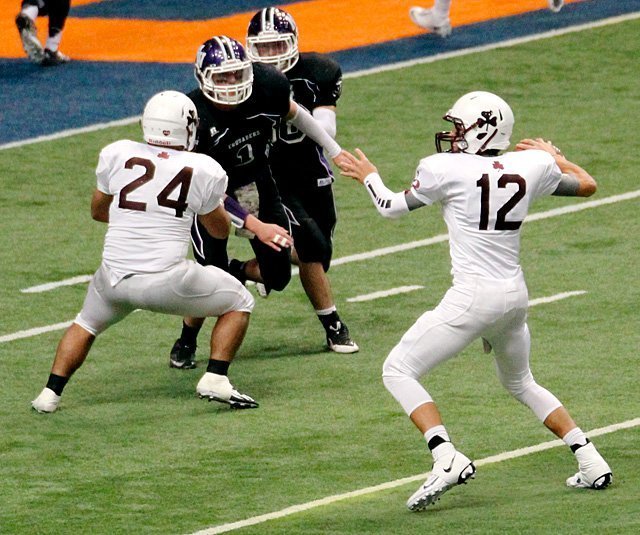 Aquinas quarterback Jake Zembiec looks to pass during the state-championship game at the Carrier Dome in Syracuse Dec. 1. Zembiec earned game Most Valuable Player honors by throwing for 211 yards and three touchdowns.

When Aquinas Institute fell behind early in the state-championship game Dec. 1, it marked one of the few times all season the Little Irish hinted they might just be football mortals after all.

That suspicion, however, was quickly blown out of Syracuse’s Carrier Dome along with AQ’s opponent, Monroe-Woodbury.

Aquinas capped off a season of perfection — 13 wins in as many games — by recording a 48-13 victory in the state Class AA final. It marks the Little Irish’s sixth championship since state playoffs were instituted in 1993 and their first since 2010, when they also sported a perfect record in winning the Class A title. This time Aquinas achieved its lofty feat in Class AA, the state’s highest classification.

In the title game against Monroe-Woodbury of Section 9, AQ trailed 7-0 in the opening minutes by surrendering a touchdown on a long punt return. From there it was all Little Irish, as they took a 27-7 halftime lead with four straight touchdowns. Three of the scores came on throws by Jake Zembiec to Alonzo Turney, on plays of 53, seven and 47 yards; the other was produced on a 60-yard interception return by Earnest Edwards.

Aquinas increased its lead to 33-7 on a one-yard touchdown run by Luch Pietropaolo midway through the third quarter. Monroe-Woodbury closed to within 33-13 late in the third, but any thought of a Crusader comeback was erased by Aquinas’ Jamir Jones on a 30-yard interception return for a touchdown with just under six minutes left in the game. AQ’s Joe Biscardi tagged on a 20-yard TD run later in the fourth quarter.

Zembiec, a sophomore quarterback, earned game Most Valuable Player honors by completing 13 of 20 pass attempts for 211 yards against Monroe-Woodbury — which, like Aquinas, had come into the game with a 12-0 record. Pietropaolo finished with 19 carries for 86 yards, while Turney made the most of his three receptions; all were touchdowns.

AQ had earned its way into the state final by winning 48-34 over Jamestown of Section 6 in a quarterfinal game on Nov. 16, and 19-6 over Elmira of Section 4 in semifinal play on Nov. 23. Earlier this post-season the Little Irish won the Section 5 Class AA title for their eighth consecutive sectional crown, prevailing 50-6 over Rush-Henrietta in the title game on Nov. 9.