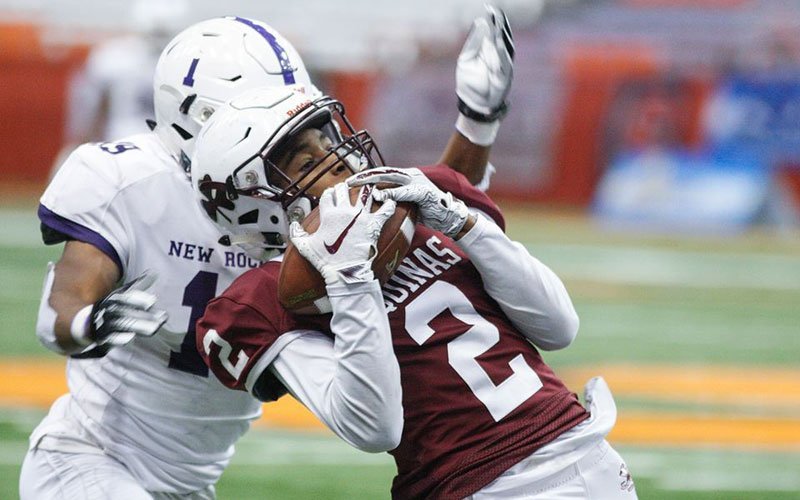 How superior is the Aquinas Institute football program? The state record-book statistics speak for themselves.

With a 21-14 win over New Rochelle in the state Class AA championship game Nov. 24, the Little Irish won their eighth crown since state football playoffs were instituted in 1993. No other school in all of New York has earned more than five titles during that 26-year span.

However, the Irish were facing the first blemish on that title-game mark in the most recent state final, played at the Carrier Dome in Syracuse. After taking a 14-0 first-half lead, Aquinas found itself in a 14-14 deadlock with New Rochelle, a Section 1 school, in the fourth quarter.

AQ then made the game’s deciding score, with Tyler Szalkowski throwing a four-yard touchdown pass to Ulysees Russell with 4 minutes, 25 seconds remaining in the game. Both of the team’s earlier touchdowns had come from Caron Robinson, who scored on a 16-yard run in the first quarter and an 89-yard burst in the second period before the Huguenots rallied to tie.

AQ, which finished with a 12-1 record this season, had reached the state final by winning 39-7 over Lancaster of Section 6 in quarterfinal play Nov. 10, and 28-21 over Cicero-North Syracuse of Section 3 in the semifinals Nov. 17.

Earlier this fall, Aquinas gained entrance into the state playoffs with a 49-18 win over Catholic-school rival McQuaid Jesuit in the Section 5 Class AA title game Nov. 3. Torres’ three rushing touchdowns led the top-seeded Little Irish to its 11th sectional championship in 13 years. AQ had reached the sectional final against the second-seeded Knights by winning 35-8 over No. 8 Edison/School Without Walls in quarterfinal play Oct. 19, and 27-3 over No. 4 Pittsford in a semifinal matchup Oct. 27.

Aquinas’ post-season victories were among the many successful team and individual performances during the fall from Catholic high schools in the diocese. Among the others:

‚Ä¢ Elmira Notre Dame football won the Section 4 title in its first year of eight-man football, which features eight players on offense and defense rather than the typical 11-man game. The Crusaders won 38-20 over Lansing in the title contest Nov. 2 as Erik Charnetski ran for three touchdowns and Kyreese Fisher rushed for two more. The Crusaders went on to win a season-ending intersectional game Nov. 9, 38-36 over Tri-Valley of Section 9, as Fisher scored three TDs. Notre Dame ended up with a 6-2 record.

‚Ä¢ In boys’ cross-country, McQuaid’s Abel Hagos won the Section 5 Class A meet Nov. 3. He finished with a time of 16 minutes, 31.5 seconds at Midlakes High School, well ahead of second-place Sean Henrietta of Fairport (16:45.8.) Hagos helped the Knights to a fourth-place finish in team scoring. One week later, at the state Class A meet Nov. 10, Hagos took 14th place in 16:27.8 at Sunken Meadow State Park in Long Island.

‚Ä¢ McQuaid football reached the sectional Class AA final by winning 33-17 over No. 7 Rush-Henrietta in quarterfinal play Oct. 20 as Hunter Walsh threw for two touchdowns and Mark Passero ran for a pair of TDs. McQuaid then powered to a 40-0 victory over No. 3 Hilton in semifinal play Oct. 27 behind Passero’s three rushing touchdowns. The Knights’ title-game loss to Aquinas gave them a final record of 8-2.

‚Ä¢ Our Lady of Mercy girls’ soccer reached the Section 5 Class A title game. The Monarchs, seeded No. 2, won 1-0 over No. 15 Canandaigua in first-round action Oct. 17, 4-2 over No. 7 Pittsford Mendon in quarterfinal play Oct. 20, and 1-0 over No. 3 Pittsford Sutherland in semifinal play Oct. 24 as Dori Rizzo scored the game’s only goal. The Monarchs fell to top-seeded Spencerport in the title game Oct. 27, 3-2 in overtime, to finish with a 16-3-1 record.

‚Ä¢ In girls’ swimming, Notre Dame’s Catherine Craig set a meet record of 1 minute, 5 seconds flat in the 100-yard breaststroke at the Section 4 Class C championships Nov. 3. Craig also won the 200 individual medley and joined with Caroline Rogers, Allie O’Brien and Alexandra Welliver to claim the 400 freestyle and 200 medley relays. Rogers added a first place in the 500 free as ND placed third in team scoring. Craig then finished fifth in the 100 breast (1:04.83) at the state meet Nov. 17 and was 16th in the 200 IM.

‚Ä¢ In girls’ tennis, Notre Dame’s doubles team of Madeleine Meier and Chloe Stemerman captured the Section 4 Class C-D doubles competition. They won their quarterfinal and semifinal matches bef0re scoring a 6-3, 6-3 victory over Chenango Forks’ Gianna Rullo and Colleen Samsel in the championship match Oct. 12. Meier and Stemerman went on to qualify for the state tournament, where they were eliminated in the first round.

‚Ä¢ Mercy girls’ tennis reached the Section 5 Class A final round. The second-seeded Monarchs won 7-0 over No. 7 Spencerport in quarterfinal play Oct. 3, then earned a 4-3 victory over No. 3 Brockport in the semifinals Oct. 4 before falling 7-0 to top-seeded Brighton in the final Oct. 8.

‚Ä¢ In girls’ golf, Mercy’s Anika Fischer qualified for the state tournament to be held this spring. She shot a 91 in the Section 5 tournament Oct. 9 at Deerfield Country Club, placing eighth, with the top nine finishers earning spots in the state event. Mercy placed third in sectional team scoring.