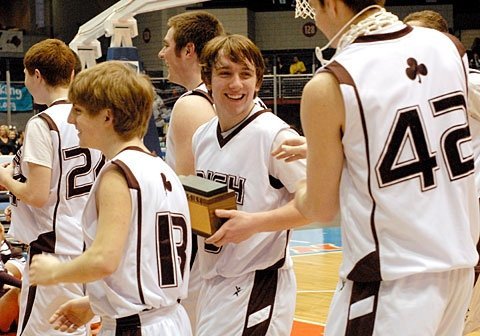 Being the best locally wasn’t enough for the Aquinas Institute boys’ and girls’ basketball teams. Both squads not only captured Section 5 championships, but also reached the state tournament’s Final Four — including a title-game appearance by the AQ girls — before their memorable 2010-11 seasons ended.

The Little Irish won their first sectional crown in 20 years with a 69-49 triumph over Wayland-Cohocton in the Class BB final on March 3. The victory saw the top-seeded Little Irish pull away from a 30-27 halftime lead over the second-seeded Golden Eagles with a 24-7 scoring edge in the third quarter. Nicole Bini led Aquinas with 26 points, Emily Brophy had 14 and Julia Crilly added 12.

Aquinas had reached the sectional final by winning 59-25 over No. 9 Waterloo on Feb. 24 in quarterfinal action as Bini had 26 points, and 69-47 over No. 4 Penn Yan in a Feb. 28 semifinal game as Bini totaled 21 points and Caileen Sennett, Brophy and Diona Johnson added 11 each.

Following its section championship win, Aquinas rolled to a 63-40 win over Mynderse Academy in the state Class B qualifier on March 7. Brophy led the offense with 17 points, Crilly had 14 and Margaret Wall added 12.

The lopsided victory trend continued over the next two state-tournament rounds. Aquinas earned a 65-38 victory over Eden of Section 6 in the quarterfinals on March 11, with Bini and Sennett each scoring 18 points. Then came a 47-23 decision over Hoosic Valley of Section 2 in semifinal play on March 18 as Crilly and Sennett topped the Irish with 13 and 12 points, respectively.

Aquinas was finally stopped by Irvington of Section 1, 91-52, in the state Class B title contest on March 19. That game saw AQ unable to contain the defending champion Bulldogs’ Brittni Lai (30 points) and Alexis Martins (27), who outscored the entire Little Irish squad by themselves. AQ was within striking distance after one quarter, 17-10, but a 30-13 deficit in the second period proved insurmountable. Bini had 14 points and Brophy 11 to lead the Irish, who posted a final record of 21-4.

Aquinas outscored each opponent by at least 20 points over the course of its six post-season victories, allowing an average of only 37 points per game.

Aquinas eased to the Section 5 Class A2 crown with a 75-45 victory over Marshall on March 5. The win featured a balanced attack, with Christian White and Phil Valenti scoring 15 points each followed by Jammal Coleman with 14 and Alex Baron with 12. Top-seeded AQ led the No. 6 Jurists 26-11, 43-26 and 62-34 at the quarter breaks.

In earlier sectional action, AQ won 87-24 over No. 8 Newark in quarterfinal play on Feb. 26 as Valenti scored 17 points, Josh Carter had 13 and White added 11. Next came a 54-25 semifinal decision over No. 4 Batavia on March 1 as Valenti and White totaled 18 and 17 points, respectively.

In its first game following the sectional title, Aquinas scored a 59-54 comeback win over Catholic-school rival Bishop Kearney in state Class A qualifier play on March 9. The Little Irish shook off a 21-7 deficit after one quarter, getting to within 31-30 at halftime before taking the lead for good in the third quarter. Baron led AQ with 15 points, Valenti had 12 and Coleman added 10.

The Little Irish then scored a 68-55 win over Buffalo East of Section 6 in the state quarterfinals on March 12. AQ was down 16-10 after one quarter, but took a 31-30 lead at the half and was up 47-45 after three quarters before pulling away. Valenti had 18 points, Coleman scored 13 and Jahmahl Pardner added 12.

AQ’s season ended with a 61-52 state semifinal loss to Jamesville-Dewitt of Section 3 on March 19. The Irish trailed 20-8 after one quarter before forging a 50-50 tie with four minutes left in the game. But a 10-point run by the Red Rams — who went on to claim their fourth consecutive state crown the next day — spelled the end for Aquinas. Carter had 11 points and Valenti finished with 10 to lead the Irish, who finished with a 22-2 record.