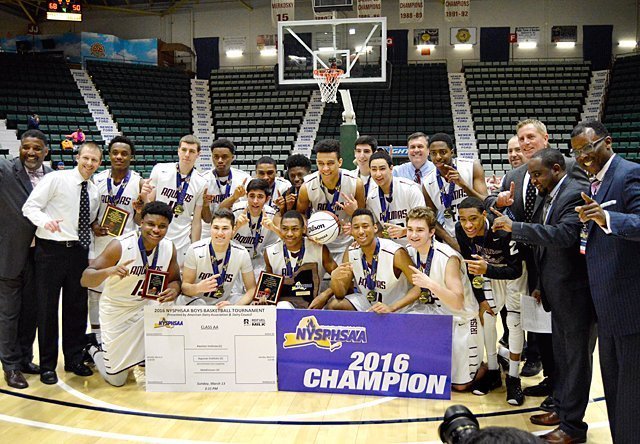 Aquinas won the NYSPHSAA Class AA title with a 68-50 victory over Middletown March 13. That gave the Little Irish a spot in the state Federation Tournament of Champions, where they scored a 54-43 semifinal win over Xaverian of Brooklyn March 18 to advance to the next day’s title game against Thomas Jefferson, also from Brooklyn. Aquinas fell in the final, 72-65, ending its season with a record of 25-4.

Our Lady of Mercy’s girls, meanwhile, reached the state Class A semifinals after winning the Section 5 Class A1 championship. Mercy’s season was stopped by Jamesville-Dewitt, 56-47, in a Final Four contest played March 11. The Monarchs posted a final record of 22-4.

In its NYSPHSAA title matchup against Middletown, Aquinas prevailed behind Jalen Pickett’s 28 points and a 20-10 scoring edge in the final quarter. The win marked the school’s first-ever state basketball crown. Combined with a state Class AA football title this past fall, AQ became the first school in state history to win titles in both basketball and football in the same school year. Several 2015-16 basketball players were members of the football squad as well.

Aquinas’ semifinal Federation matchup against Xaverian saw the Little Irish again ride the offense of Pickett, who scored 20 points. Aquinas finally fell short in the title game against Thomas Jefferson, despite rallying from a 16-point deficit in the second half to close to within four. Pickett’s 21 points, along with 18 from Earnest Edwards, led the Irish.

Aquinas’ post-season was somewhat surprising, since the Irish were only the No. 3 seed in their own Section 5 playoffs. However, they claimed the Class AA crown by winning 47-43 over top-seeded Fairport in the final Feb. 28, overcoming a 40-38 deficit after three quarters and scoring the game’s final eight points. Edwards led the way with 23 points.

That advanced AQ to states, where the Little Irish rolled to a 65-42 victory over Niagara Falls in Class AA quarterfinal play March 5. Jason Hawkes’ 20 points led the Irish, who rolled out to a 38-13 halftime lead.

Following that win was a tense 55-51 overtime victory over Shenendehowa in semifinal action March 12. The Little Irish erased a five-point deficit with less than 40 seconds remaining to force overtime at 45-45, then scored the first five points of OT and held on for the win. Edwards led his team with 21 points.

The Monarchs’ path to the state semifinals began March 5 with a 61-30 win over Lake Shore of the Buffalo area in the Class A quarterfinals behind 14 points each from Leah Koonmen and Katie Titus. That came on the heels of a 60-34 decision over Batavia March 1 in state-qualifier play as Jayla Myles had 18 points.

However, in semifinal play against Jamesville-Dewitt, Mercy was unable to overcome the Red Rams of Syracuse despite getting a game-high 23 points from Traiva Breedlove and 13 from Koonmen.

Preceding the state tournament was an epic 65-60 win over No. 2 seed and Catholic-school rival Bishop Kearney in the Section 5 Class A1 final Feb. 26. The top-seeded Monarchs overcame a 10-point deficit in the third quarter and got balanced scoring — 17 points from Titus, 15 from Koonmen and 14 each from Myles and Breedlove — to vanquish BK, which had won four straight sectional titles.

In earlier Section 5 games, Mercy won 50-18 over No. 8 Canandaigua in quarterfinal play Feb. 19 as Myles registered 21 points. That was followed by a 76-58 semifinal victory over No. 5 Spencerport Feb. 22 behind 23 points from Breedlove.

Bishop Kearney’s girls were led in the sectional final by Allure Simmons, who totaled 19 points. The Kings had reached the championship contest by winning 55-30 over third-seeded Brighton Feb. 22 in semifinal play as Marianna Freeman and Saniaa Wilson scored 13 points each. In its opening sectional game, BK won 78-37 over seventh-seeded Greece Athena Feb. 19 behind 26 points from Wilson. Kearney posted a final record of 17-5.

Also turning in a great season were the Elmira Notre Dame girls, who claimed the No. 1 seed in the Section 4 Class C playoffs. The Crusaders earned a 57-54 victory over No. 9 Sidney in quarterfinal play Feb. 20 as Mary Foster scored 11 points and Laurel Vargas and Mia Herlan had 10 each. ND’s season was ended in semifinal play Feb. 24 by fourth-seeded Watkins Glen, 40-35, despite 10 points from Mackenzie Maloney. Notre Dame’s final record was 17-3.