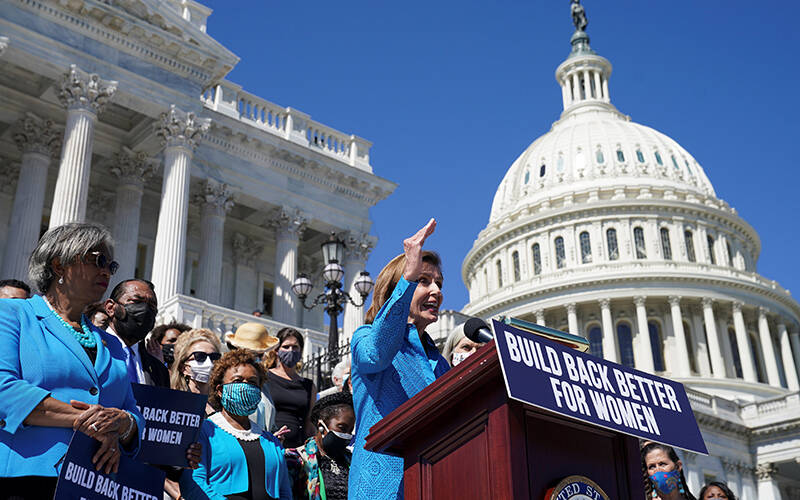 Bill to codify Roe called one of most ‘extreme’ abortion bills in U.S.

SAN FRANCISCO (CNS) — Archbishop Salvatore J. Cordileone of San Francisco is asking “all Catholics and others of goodwill” to join a prayer and fasting campaign for House Speaker Nancy Pelosi, a Catholic Democrat who supports legal abortion.

She represents California’s 12th Congressional District, which is entirely within San Francisco.

What has prompted the prayer and fasting campaign is her leadership on the Women’s Health Protection Act, or H.R. 3755, passed by the House in a 218-211 vote Sept. 24.

It codifies the U.S. Supreme Court’s 1973 Roe v. Wade decision legalizing abortion nationwide. The measure establishes the legal right to abortion on demand at any stage of pregnancy in all 50 states under federal law.

“A conversion of heart of the majority of our congressional representatives is needed on this issue, beginning with the leader of the House, Speaker Nancy Pelosi,” Archbishop Cordileone said in a statement Sept. 29.

“I am therefore inviting all Catholics to join in a massive and visible campaign of prayer and fasting for Speaker Pelosi: Commit to praying one rosary a week and fasting on Fridays for her conversion of heart,” he said.

He asked Catholics to sign up for the Benedict XVI Institute’s “Rose and Rosary for Nancy” campaign at BenedictInstitute.org. “A rose will be sent to her as a symbol of your prayer and fasting for her.”

Pelosi, he said, “speaks fondly” of her five children; she also has nine grandchildren.

“She clearly has a maternal heart,” Archbishop Cordileone continued. “Pope Francis has called abortion murder, the equivalent of hiring a hitman to solve a problem. The solution to a woman in a crisis pregnancy is not violence but love.

“Please join me in praying the rosary and fasting for a conversion of Speaker Pelosi’s maternal heart to embracing the goodness and dignity of human life not only after birth, but in the womb as well.”

The rose is a symbol of St. Therese of Lisieux, the “Little Flower,” and of Mary, the “mystical rose,” he noted.

St. Therese, whose feast day is Oct. 1, “is remembered,” he said, “for these famous and cherished words: ‘After my death, I will let fall a shower of roses. I will spend my heaven doing good upon earth. I will raise up a mighty host of little saints. My mission is to make God loved.’”

“And after her death, the roses began to shower down from heaven,” Archbishop Cordileone said. “Roses have been called St. Therese’s ‘signature,’ a sign that the petitioner’s prayer has been heard.”

“At this particular moment in the history of our nation, we need more than ever the intercession of our Blessed Mother, St. Therese and all other saints who have shown us the path to life,” he said.

He also pointed to the angry reaction elected by the Texas “heartbeat bill,” which bans abortion after the sixth week of pregnancy and took effect Sept. 1.

The reaction ” shows how desperately our country, and many of our political leaders, need a conversion of heart to steer us away from the path to death and reclaim a culture of life,” he said.

Ahead of the House vote on H.R. 3755, Archbishop Cordileone called the measure “nothing short of child sacrifice.”

The “misnamed” measure “shows to what radical extremes the supposedly ‘pro-choice’ advocates in our country will go to protect what they hold most sacred: the right to kill innocent human beings in the womb,” he said in a Sept. 21 statement.

At her Sept. 23 news conference, Pelosi defended her actions on abortion.

“It’s none of our business how other people choose the size and timing of their families,” she said in response to a question from Erik Rosales, Capitol Hill correspondent for EWTN News Nightly.

She said she and Archbishop Cordileone “had a disagreement about who should decide this. I believe that God has given us a free will to honor our responsibilities.”

In a Sept. 24 tweet ahead of the House vote, the archbishop tweeted a response to Pelosi’s comment: “Representatives in Congress: you have free will. Use it today to vote no to legalizing the killing of babies even weeks from birth. You have a choice. Give it to unborn babies, too.”