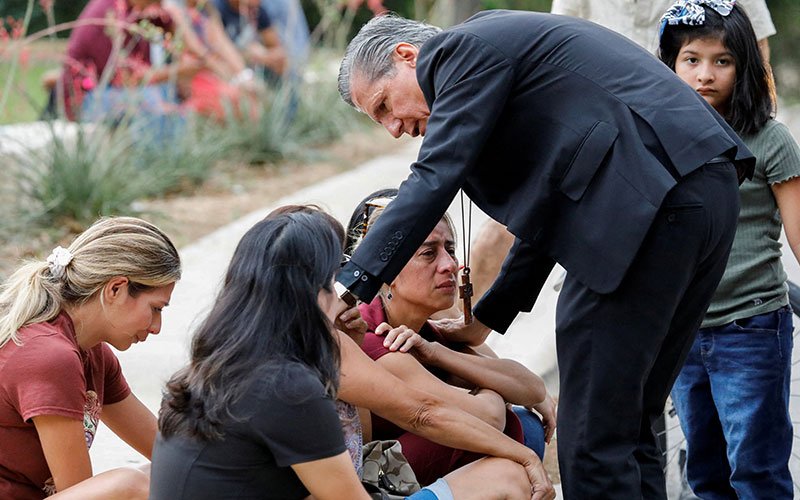 Archbishop Gustavo García-Siller of San Antonio comforts people in Uvalde, Texas, outside the SSGT Willie de Leon Civic Center, where students had been transported from Robb Elementary School after a shooting May 24, 2022. (CNS photo by Marco Bello/Reuters) 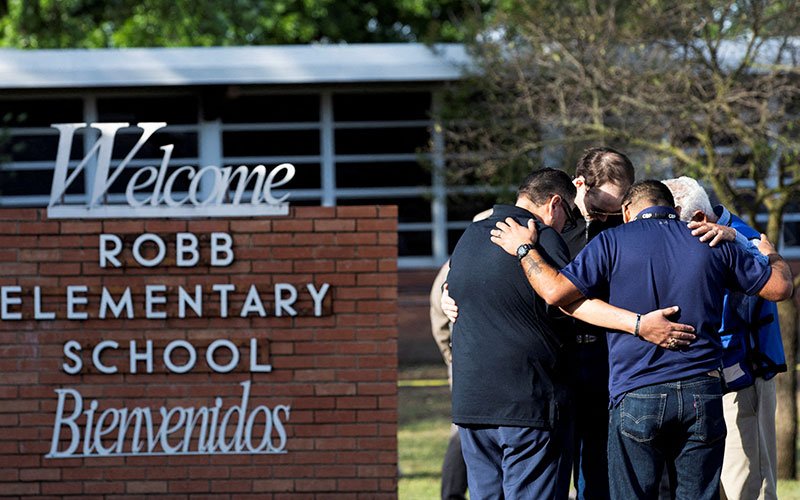 People gather at Robb Elementary School in Uvalde, Texas, May 25, 2022, the day after a mass shooting. (CNS photo by Nuri Vallbona/ Reuters) 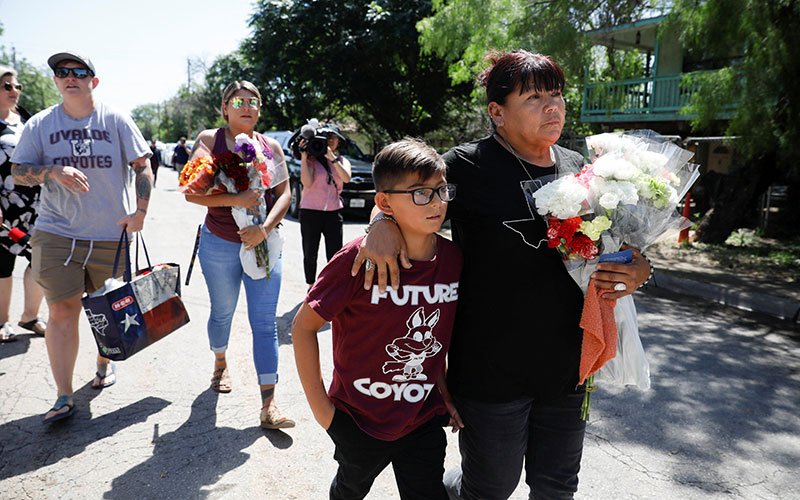 Dora Flores and her grandson arrive at Robb Elementary School in Uvalde, Texas, May 25, 2022, with flowers the day after a mass shooting. (CNS photo by Marco Bello/Reuters)

WASHINGTON (CNS) — When news broke of the May 24 school shooting in Uvalde, Texas, San Antonio Archbishop Gustavo García-Siller was in a meeting with about 150 archdiocesan priests.

The meeting was rescheduled and several priests left right away to be with people in the Texas town about 100 miles west of San Antonio and close to Mexico’s border.

The archbishop also went directly to Uvalde where a teenager had killed 19 students and two elementary school teachers at Robb Elementary School before he was shot and killed by police.

Archbishop García-Siller’s first stop was the hospital to meet with families of those wounded in the shooting, followed by a visit to the town’s civic center where families awaited news of their loved ones. He then celebrated Mass at Sacred Heart Church in Uvalde and spoke with family members and then reporters after Mass before heading home around midnight.

The following day, he spoke to Catholic News Service while in a car riding back to Uvalde to be at Robb Elementary School with other civic and faith leaders before going back to the civic center.

He said it was important to be with the people suffering from this tragedy to remind them they are not alone, give them the support they need and most of all just show them “love, love, love.”

He said those in the congregation during the May 24 evening Mass at Sacred Heart included some who had been directly impacted by the school shooting, including the person who called 911 about the shooter and someone who had brought wounded schoolchildren to the hospital.

The altar server was a 10-year-old girl, around the age of many of the students shot that day.

The archbishop, filling in for the pastor who was out of town, said the congregation was numb. They just couldn’t talk, he said, because they were so shocked by what had happened or still unsure of what this meant for their own families and the community at large.

He urged them to greet one another at the start of Mass as a sign of their shared humanity and to express “what is hard to articulate.”

He hoped the readings, music and Communion would provide a balm for the families there but also help them to “build strength” for what is ahead.

Two priests spoke during the Mass about their visits to the hospital that day with shooting victims and family members. One said he visited a girl whose face was still bleeding and when he asked her what was on her heart she simply said: “My friends, nothing but my friends.”

Archbishop García-Siller said he mentioned in his homily and has been telling reporters about the different levels of focus right now in the wake of the school shooting.

The first priority is those who were affected. He said they need all possible help on both a practical level and also spiritually in the prayers they have asked for. He also said the local community needs to be strong, “for the journey will be a long road ahead.”

The other key focus right now, he said, is to challenge local, state and federal leadership about gun control, noting that this shooting is “another example that we have failed. We have failed because we don’t have people as the center.” He also stressed that more people need to take responsibility for what happened, emphasizing that it was “not an isolated event.”

Catholic Charities of San Antonio began providing crisis relief at Robb Elementary School May 25 with grief counselors and legal services available as well as emergency financial assistance for family members who need to travel to Uvalde.

In the days ahead, the doors to Sacred Heart Church will be open and its Catholic school also will have counselors on hand.

The archbishop wrote to Pope Francis May 24 about the school shooting, which took place just days before the school’s summer recess, asking for his prayers. The next day he received a telegram from Cardinal Pietro Parolin, the Vatican’s secretary of state, expressing the pope’s condolences.

The message said the pope was “deeply saddened to learn of the tragic shooting that took place” and assured those “affected by this attack of his spiritual closeness.” He also commended the souls of those who died to God’s mercy and “implored the divine gifts of healing and consolation upon the injured and bereaved.”

The pope prayed that those “tempted to violence will choose instead the path of fraternal solidarity and love.”

Archbishop García-Siller said he had seen many moments of grace in the 24 hours since the attack and noted that many people were trying to do something good in response to the crisis. This outreach, he said, will not be difficult in the current moment.

The challenge, he said, will be how to overcome current divisions. “This will take a long, long time.”

But he added to that a last word of hope that he also has been sharing in Uvalde, emphasizing: “We know in whom we have placed our trust.”