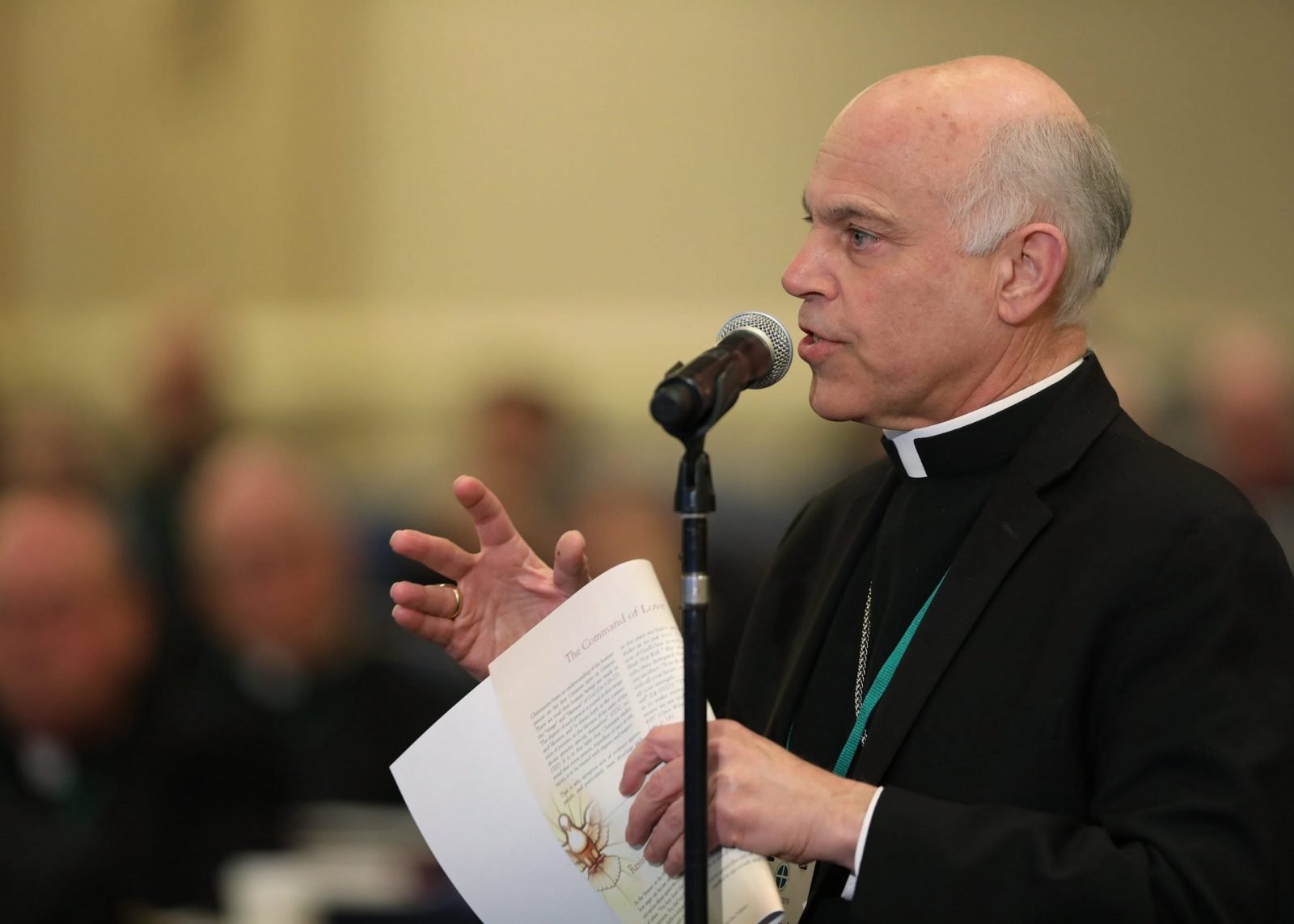 San Francisco Archbishop Salvatore J. Cordileone speaks from the floor during the fall general assembly of the U.S. Conference of Catholic Bishops in Baltimore Nov. 11, 2019. (CNS photo by Bob Roller)

“‘Right to choose’ is a smokescreen for perpetuating an entire industry that profits from one of the most heinous evils imaginable,” he said in a statement. “Our land is soaked with the blood of the innocent, and it must stop.”

Archbishop Cordileone’s remarks came in response to comments by House Speaker Nancy Pelosi, D-California, during a Jan. 18 episode of a podcast hosted by former Secretary of State Hillary Clinton, the Democrats’ 2016 presidential nominee.

Pelosi, a Catholic, accused pro-life voters who supported President Donald Trump in the 2020 election and oppose his recent impeachment by the House of “being willing to sell the whole democracy down the river for that one issue” — abortion.

The 80-year-old lawmaker from San Francisco, who has a 100% rating on the issue from NARAL Pro-Choice America, said the pro-lifers’ votes caused her “great grief as a Catholic.”

News reports said her comments came when she and Clinton were discussing the Jan. 6 storming of the U.S. Capitol and a new Washington Post-ABC News poll showing that 70% of Americans say Trump was responsible for the riot. Pelosi pointed to another poll that said over 40% of Americans do not support removing Trump from office.

Unlike Pelosi, Archbishop Cordileone said, he “will not presume to know what was in the minds of Catholic voters when they voted for the presidential candidate of their choice, no matter who their preferred candidate was.”

“To begin with the obvious: Nancy Pelosi does not speak for the Catholic Church,” he said. “She speaks as a high-level important government leader and as a private citizen. And on the question of the equal dignity of human life in the womb, she also speaks in direct contradiction to a fundamental human right that Catholic teaching has consistently championed for 2,000 years.”

“Christians have always understood that the commandment, ‘Thou shall not kill,’ applies to all life, including life in the womb,” he said, adding: “Pope Francis continues this unbroken teaching.”

Catholics “will continue to speak out on behalf of those who have no voice to speak for themselves and reach out to, comfort and support those who are suffering the scars of the abortion experience,” the archbishop said. “We will do so, until our land is finally rid of this despicable evil.”

Archbishop Gomez prayed God will grant Biden the wisdom and courage to lead the nation and expressed hope the incoming administration “will work with the church and others of goodwill” to “address the complicated cultural and economic factors that are driving abortion and discouraging families.”

For the U.S. bishops, the “continued injustice of abortion” remains the “preeminent priority,” he said, but “‘preeminent’ does not mean ‘only.’ We have deep concerns about many threats to human life and dignity in our society.”

In reiterating “the declaration of the U.S. bishops that abortion is for Catholics the ‘preeminent priority’ … he acted rightly and collaboratively in his role as USCCB president, and I am grateful to him for doing so,” Archbishop Cordileone said.

“Preeminent does not mean ‘only,’ of course,” he repeated. “There are certainly many evils we must confront and many goods we must pursue. In his inaugural speech … President Biden gave a moving call to unity and healing. He offered what I would call a ‘Litany of Compassion’ — bringing before the eyes of the nation the suffering of people across a wide spectrum of issues.”

“In my experience, advocates for unborn children also work diligently to be of service in many of these causes as well,” Archbishop Cordileone said. “Speaker Pelosi has chosen this week to impugn the motives of millions of Catholics and others for choosing to make voting on the issue of abortion their priority and accuses them of ‘selling out democracy.’ This is not the language of unity and healing. She owes these voters an apology.”

Catholic News Service submitted a request Jan. 22 to Pelosi’s press office seeking a comment from her about the archbishop’s statement, but there was no immediate reply.

Meanwhile, President Joe Biden, who also is a Catholic, and Vice President Kamala Harris marked the 48th anniversary of the Supreme Court’s Roe v. Wade decision legalizing abortion with a statement saying their administration “is committed to codifying Roe v. Wade and appointing judges that respect foundational precedents like Roe.”

The Jan. 22 statement does not use the word “abortion,” but talks about “reproductive health” and protecting women’s access to “health care.”

“In the past four years, reproductive health, including the right to choose, has been under relentless and extreme attack,” they said Jan. 22. “We are deeply committed to making sure everyone has access to care — including reproductive health care — regardless of income, race, ZIP code, health insurance status, or immigration status.”

They added: “Now is the time to rededicate ourselves to ensuring that all individuals have access to the health care they need.”

“President Biden & VP Harris just released a statement on the 48th anniversary of Roe v. Wade, absurdly calling it ‘foundational.’ Wrong. What is truly foundational is the right to LIFE of every American, as stated in the Declaration of Independence,” the Susan B. Anthony List tweeted.

“Joe Biden marks the anniversary of Roe v Wade by saying he is ‘deeply committed’ to the intentional destruction of innocent life through the heinous practice of abortion,” said a tweet from CatholicVote.org.

Jeanne Mancini, president of the March for Life Defense and Education Fund, tweeted: “Abortion isn’t healthcare. It is heartbreaking but not surprising that on the day we commemorate the loss of 60+ million Americans to abortion the new administration is already aggressively leaning into abortion extremism.”