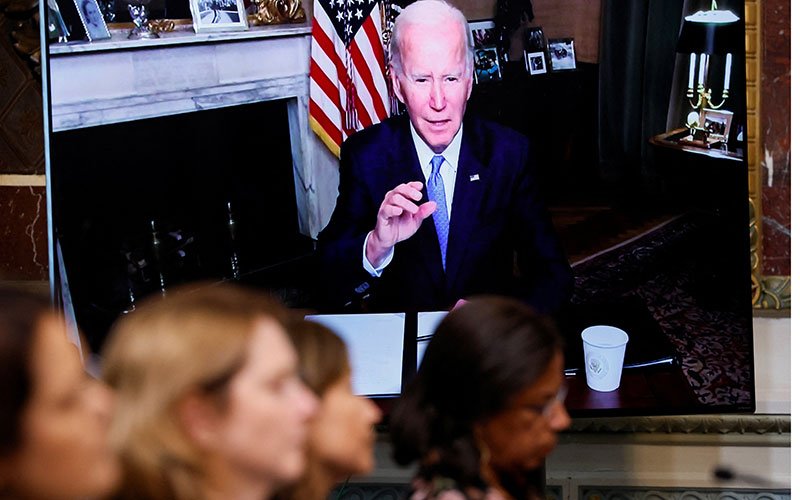 President Joe Biden delivers remarks from the White House during a virtual event in the Eisenhower Executive Office Building in Washington Aug. 3, 2022. Biden signed an executive order to allow Medicaid funds to be used to help low-income women pay for abortion if they have to go out of state to obtain one. (CNS photo by Evelyn Hockstein/Reuters)

“Even preceding the Dobbs decision, my brother bishops and I have implored the nation to stand with moms in need, and work together to protect and support women and children,” Baltimore Archbishop William E. Lori said in a statement.

“It is the wrong direction to take at a moment when we should be working to support women and to build up a culture of life,” added the prelate, who heads the U.S. Conference of Catholic Bishops Committee on Pro-life Activities.

On Aug. 3, Biden signed an executive order instructing the Department of Health and Human Services “to advance access to reproductive health care services, including, to the extent permitted by federal law, through Medicaid for patients traveling across state lines for medical care.”

In his statement, Archbishop Lori said: “I continue to call on the president and all our elected officials to increase support and care to mothers and babies, rather than facilitate the destruction of defenseless, voiceless human beings.”

“Blessed Virgin Mary, patroness of our nation, intercede for us as we advocate to protect human life and work toward solutions that will help every mother and child flourish,” he said.

Biden wrote in his order that “eliminating the right recognized in Roe has had and will continue to have devastating implications for women’s health and public health more broadly.”

Before he signed the order at a White House event, he claimed that because of the court’s reversal of Roe, a “health care crisis … has unfolded” that is affecting women “all across America.”

The use of Medicaid funds is aimed at helping low-income women obtain an abortion in another state if the state where they reside has banned it, according to White House officials.

Critics of the move said it was unclear how federal funds could be used because the long-standing federal Hyde Amendment prohibits federal government dollars from being spent on abortion except in cases of rape, incest and to save the woman’s life.

This was Biden’s second executive order regarding abortion. The first one he issued was July 8 to safeguard access to medication abortion and emergency contraception; protect patient privacy; launch public education efforts; and strengthen “the security of and the legal options available to those seeking and providing abortion services.”

Before signing the first order, Biden condemned what he called the “extreme” Supreme Court majority for overturning Roe v. Wade.

The ruling sends the issue of abortion regulation back to the states.