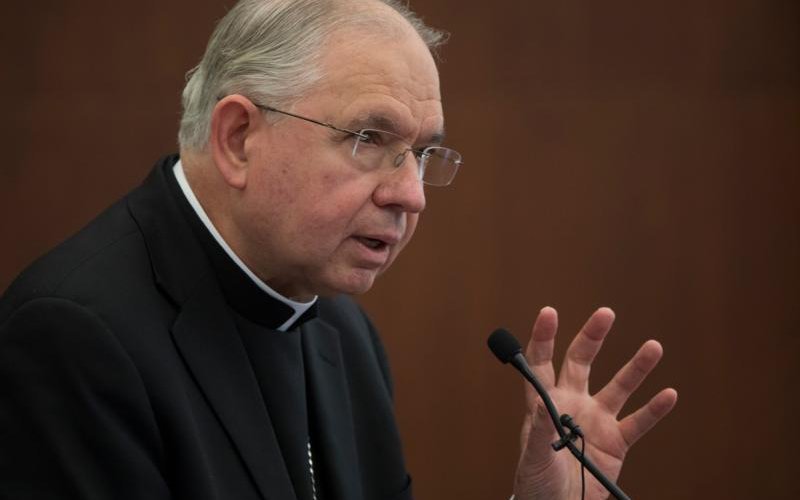 Archbishop Jose H. Gomez of Los Angeles speaks during a lecture at The Catholic University of America in Washington Feb. 6, 2019. (CNS photo by Bob Roller)

LOS ANGELES (CNS) — Los Angeles Archbishop Jose H. Gomez said he was “deeply disappointed” by the California Senate’s passage of a bill that would force priests to disclose information about child sexual abuse that they hear in the sacrament of confession.

After legislators voted 30-2 in favor of the measure May 23, the archbishop urged the state’s Catholics “to continue to pray and make your voices heard on this issue, which is so vital to our faith and religious freedom.”

“I continue to believe we can strengthen mandated reporting laws to protect children’s safety while at the same time preserving the sanctity of penitential communications,” he stated. “My brother bishops and I will continue to work with our lawmakers in the Assembly.”

As the bill, S.B. 360, made its way through the Legislature, the California bishops urged lawmakers to strengthen and clarify mandated reporting requi

Before the measure went to the Senate floor, lawmakers “accepted several of the church’s recommendations to strengthen mandated reporting requirements for clergy,” as Archbishop Gomez noted in a May 20 statement.

However, despite the changes, the bill remained “an unacceptable violation of our religious freedoms that will do nothing to protect children,” the archbishop said in his May 20 statement.

Current California law requires clergy to report suspected abuse or neglect unless the information about the abuse was obtained during confession.

On May 16, the Senate Appropriations Committee voted 4-2 to send an amended version of S.B. 360 to the full Senate for a vote.

In his statement, Archbishop Gomez said that as amended, “S.B. 360 still denies the sanctity of confession to every priest in the state and to thousands of Catholics who work with priests in parishes and other church agencies and ministries.”

In the run-up to the Appropriations Committee hearing, Archbishop Gomez had urged a no vote on S.B. 360. More than 1,300 people contacted their senators through the website of the California Catholic Conference — urging lawmakers to keep the seal of confession sacred.

“I am grateful that senators heard the voice of the Catholic people — who understand that confession is a sacred space, an intimate dialogue between the believer and the living God,” Archbishop Gomez said. “We know that no government, for whatever reason, should violate the privacy and confidentiality of that sacred conversation.”

Kay is editor of Angelus, the news outlet of the Archdiocese of Los Angeles.