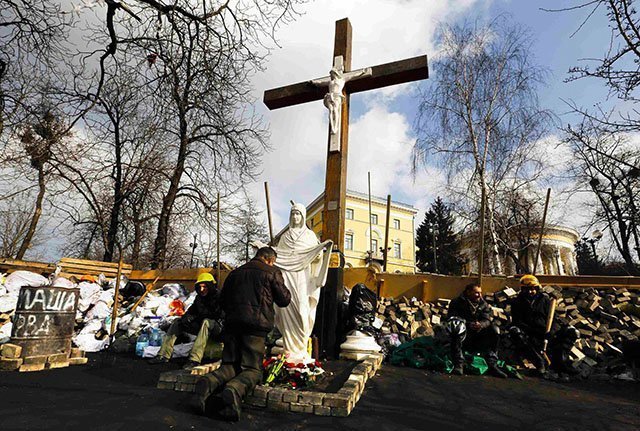 A man kneels in prayer in front of a statue of Mary and a crucifix by a barricade near Independence Square in Kiev, Ukraine, Feb. 21. Scores of protesters were killed and hundreds were wounded by snipers on Kiev's Independence Square and its nearby streets, according to medical workers treating the victims.

VATICAN CITY (CNS) — The three months of protests in Ukraine that ended with government snipers killing dozens of people strengthened the commitment to democracy of many Ukrainians, but also left the country vulnerable to further violence and division, said the head of the Ukrainian Catholic Church.

"The danger that our neighbor (Russia) will provoke a civil war has not passed," Archbishop Sviatoslav Shevchuk of Kiev-Halych told reporters in Rome Feb. 25, adding that the protests have solidified the Ukrainian people’s commitment to independence, freedom and democracy.

Bishop Hlib Lonchyna, head of the Ukrainian Catholic Eparchy in England, told Catholic News Service, "Our church stayed with the people as the struggle widened from a political one over integration with Europe into a larger one for basic human rights and dignity.

"We hope the Russians won’t try to meddle, since this would create a situation even worse than before. Having once seemed immutable, conditions have suddenly changed — and although dangers still lurk ahead, solutions must be worked out by Ukrainians."

Snipers opened fire on protesters in Kiev’s Independence Square Feb. 19, killing at least 70 people. President Viktor Yanukovich, who sparked the protests by deciding not to sign an agreement with the European Union but forge closer ties with Russia, left Ukraine’s capital Feb. 21, and the country’s parliament voted to remove him from office the same day.

"Yanukovich saw his support melting away like the snow when the sun comes out," Archbishop Shevchuk told reporters at the Vatican. "The security forces disappeared and so did the president."

The archbishop described himself "as an eyewitness" to the protests and insisted it was untrue that the protesters were "extreme nationalists." At first, he said, they were students who dreamed of living in a "free, democratic and European" Ukraine.

When the government tried to use force to end the protest in December, he said, people from all walks of life started joining the students to say, "No to corruption, no to dictatorship, no to the denial of human dignity," and yes to citizens’ right to decide the future of their country. 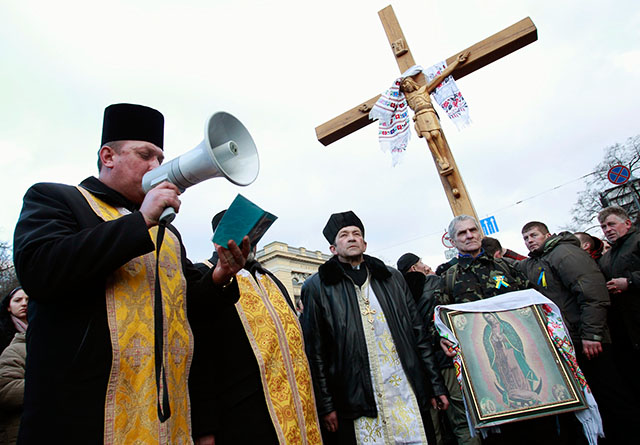 An Orthodox clergymen leads a prayer service alongside a crucifix and an image of Our Lady of Guadalupe Feb. 24 at the site in Kiev where people have been killed in recent clashes protesting against the government. Ukrainian President Viktor Yanukovich, ousted after bloody street protests, is wanted for mass murder, authorities announced Feb. 24.

Throughout the protest, the archbishop said, the All-Ukrainian Council of Churches and Religious Organizations supported the protesters’ objectives, pleaded for them to remain peaceful and tried to mediate between them and the government. The council, he said, includes Catholic, Orthodox, Protestant, Jewish and Muslim representatives.

The diversity, he said, is natural for any large country. Each region has its own history, "but all of the people saw themselves as Ukrainians."

Those seeking power, however, see the diversity as something to exploit for their own purposes, he said, which is why the council of churches issued an appeal for unity and has clearly defined as "morally unacceptable" and "a crime" the attempt to use religious or cultural differences for political gain.

Archbishop Shevchuk said there is "no desire within Ukraine" to split the country, "but maybe someone from outside, seeing that he can’t eat the whole pie, would want at least part of it." 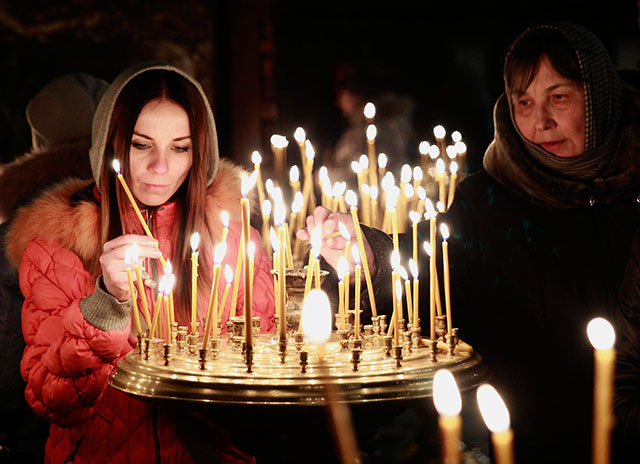 Women light candles during prayer service at a church in Kiev, Ukraine, Feb. 23. Ukraine’s acting government issued a warrant Feb. 24 for the arrest of President Viktor Yanukovich, last reportedly seen in the pro-Russian Black Sea peninsula of Crimea, accusing him of mass crimes against protesters who stood up for months against his rule.

The evening before he met the press, Archbishop Shevchuk and Ukrainians working in Rome joined the Sant’Egidio Community for a prayer service for peace. In a packed Basilica of Santa Maria in Trastevere, tears flowed as the archbishop led the singing of the Lord’s Prayer in Ukrainian.

The lay Sant’Egidio Community, known for its promotion of interreligious dialogue and peace mediation, also runs Rome’s Basilica of St. Bartholomew, which serves as a shrine to the martyrs of Nazism and 20th-century communist dictatorships. The basilica’s side altars are filled with the personal belongings of people killed for their faith, including Ukrainian Catholics martyred after their church was outlawed in 1946.

Archbishop Shevchuk said the last time he was with Sant’Egidio members was "to give you our treasures — relics of our martyrs. Never would I have guessed that there would be new martyrs."

All the churches of Ukraine supported the protesters, even setting up chapel tents and leading morning prayer services, he said. Church buildings near Independence Square were turned into first aid stations and, once the shooting began, into operating rooms.

"Before leaving Kiev, I went to visit the clandestine hospitals," he said. "In the Lutheran church, where at least 10 injured were receiving care, I thanked the pastor. He said, ‘No, don’t thank us. It is Christ we are caring for.’"

"Right now we have thousands of injured" and neighboring countries have offered to take those with the most serious physical injuries. "But there are also wounded hearts and souls," he said, and their healing will require prayers and the services of the churches.

Contributing to this story was Jonathan Luxmoore in Oxford, England.