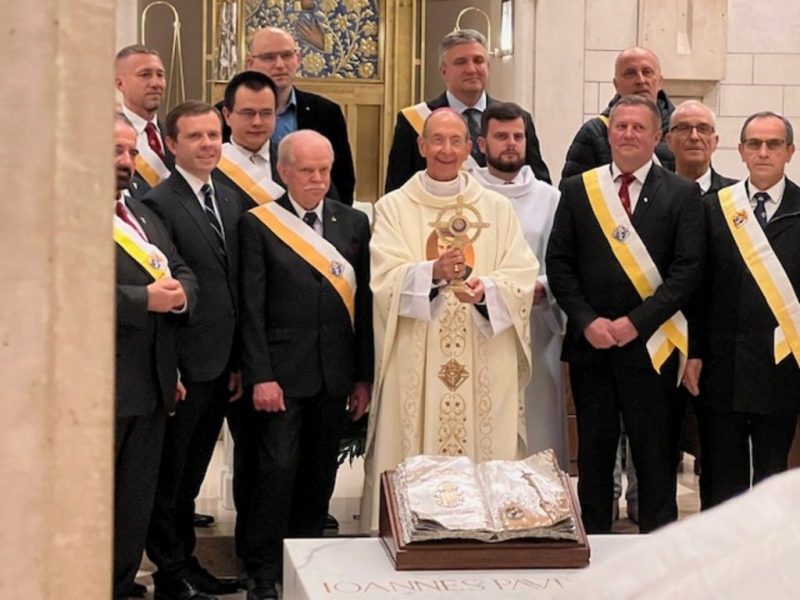 BALTIMORE (CNS) — Archbishop William E. Lori of Baltimore joined a small group of leaders from the Knights of Columbus on a four-day trip to Poland and Ukraine to help distribute aid from the fraternal organization to orphanages and other service centers assisting refugees from the war in Ukraine.

Supreme Knight Patrick Kelly established the Ukraine Solidarity Fund in February to assist with food, shelter, clothing and other supplies.

During this trip, the Knights brought care packages for internally displaced persons and also provided monetary support for the Ukrainian Catholic Church, the Latin-rite Church in Ukraine and for the orphanage run by the Archdiocese of Czestochowa, Poland.

“The Ukrainians are a very sturdy people, a courageous people. What I’m seeing is beautiful hope,” he told the Catholic Review, magazine of the Archdiocese of Baltimore.

As an illustration, he noted that the choir at Sunday Mass at St. John Paul II Parish in Lviv was made up of children who are refugees “and they sang like angels.” Among them were one who played piano and two who played violin.

“These are all children whose homes, as far as I know, are gone. But they were there, and they were joyful. They were singing,” said the archbishop, supreme chaplain of the Knights of Columbus.

The choir director also was communicating hope and joy to the young people in the choir, who were reflecting it back to her, Archbishop Lori said. He said he also saw resilience in the workers taking care of the displaced persons.

He walked around the main square with Archbishop Mokrzycki.

“You see it (resilience) in the people, in the general populace. … And there are people — war or no war — they’re out there, their families are out there, lots of young people are out there and they are doing their very best to carry on as if there is no war. I think there’s great resiliency here in Ukraine,” Archbishop Lori said.

On the second day of the trip, the group stopped at an orphanage near Czestochowa near the famed shrine that houses an icon of Mary holding the child Jesus.

At the parish of St. Wojciech there, the archbishop helped distribute warm coats as part of the Knights’ Coats for Kids campaign. He also gave out little treats during lunch time.

“What’s interesting is that a lot of these children were from families that already were in difficult situations,” Archbishop Lori said. “Some of them were families that were broken up, some of them did not have any kind of stability before the war.”

“But once the war broke out, their situation just got worse,” he said. “Many of them have no one in the world to look after them; their families have been dispersed or whatever. And so, Caritas (the Catholic charity) of Krakow has taken them in.”

Bond of cooperation among Knights

“I’ve been uniformly impressed by what I’ve seen the Knights doing here, both in Poland and in Ukraine,” Archbishop Lori added.

Archbishop Lori said the spirit of generosity is the same in both places.

“In fact, there’s a remarkable bond of cooperation between the Knights in Poland and the Knights in Ukraine,” he said, noting that it is good to see this close communication and them working together, as they respond to needs and help each other grow in their respective countries.

“I would say the other difference is that the people I met this morning were, in a very direct way, victims of the war,” he continued, “because they lived in cities that have been heavily damaged by the hostilities by the shelling and many of them have come here to Lviv really without any other place to go.”

Lviv has been less affected than other sites in Ukraine, he said, but it is not out of harm’s way.

“There was shelling going on earlier in the war, and they’re not immune from shelling now, and, of course, the aggressors will not stop at military targets,” the archbishop said of the Russians who invaded Ukraine in February. “They’re perfectly willing to do civilian targets as well, and so while in many ways it looks like life is returned to normal, there are signs it’s not normal.”

Among those signs, he cited tighter border security between Poland and Ukraine, checkpoints and fortifications for buildings that house precious artifacts.

Archbishop Lori said the Ukraine Solidarity Fund and the efforts in Poland and Ukraine to assist those affected by the war represent “an unbroken chain of charity.”

Knights, especially in the United States and Canada, raised a significant amount of money. Knights in Poland and Ukraine have added to the funds and also are the points of distribution for the financial assistance.

As of Oct. 3, the Ukraine Solidarity Fund had raised more than $19 million from more than 56,000 donors, including a $1.5 million pledge from the Knights’ Supreme Council.

According to Steven Curtis, vice president of corporate communications for the Knights, 100% of donations are used to assist those directly affected by the conflict in Ukraine.

According to Szymon Czyszek, director of International Growth in Europe for the Knights of Columbus, more than 40,000 care packages and more than 1.2 million pounds of supplies including food, medicine and clothing have been distributed so far as a result of the Ukraine Solidarity Fund.

Gunty is associate publisher/editor of Catholic Review Media, the publishing arm of the Archdiocese of Baltimore.

Tags: War in Ukraine
Copyright © 2022 Catholic Courier, Inc. All rights reserved. Linking is encouraged, but republishing or redistributing, including by framing or similar means, without the publisher's prior written permission is prohibited.