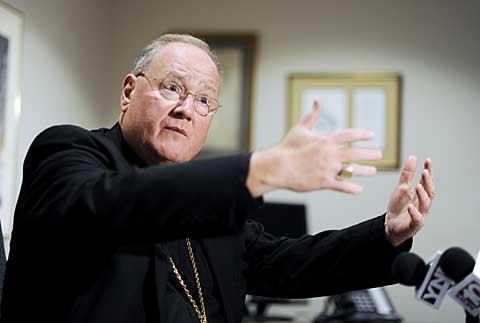 ROCHESTER — Declining Mass attendance, which has driven the closures of parishes throughout the northeastern United States, has two main sources: demographic shifts and the secularization of modern culture, according to New York Archbishop Timothy M. Dolan.

Archbishop Dolan made his comments during a June 22 press conference prior to his appearance at Sacred Heart Cathedral for a special Mass that marked the jubilees of diocesan priests, the feast day of the Rochester Diocese’s patron, St. John Fisher, and the culmination of the Year for Priests.

The New York City prelate said Bishop Matthew H. Clark faces the same challenges and painful decisions in Rochester that his brother bishops and archbishops confront throughout the U.S. Northeast.

"Believe me, he’s not alone; we are going through the very same challenges in the Archdiocese of New York," Archbishop Dolan said of Bishop Clark, who recently affirmed an Irondequoit Pastoral Planning Group decision to close St. Salome and St. Thomas the Apostle parishes in Irondequoit. Additionally, Our Lady of Mercy Parish in Greece will celebrate its closing on Mass Sunday, June 27, and two Rochester parishes moved out of their buildings this year to begin worshipping at other Catholic churches.

While acknowledging that he can’t speak to the specific instances of these parishes, Archbishop Dolan said that on the whole, shifting patterns of Catholics have changed the church in the Northeast, which previously had been an epicenter for Catholic parishes, heritage and activity.

"Thanks be to God for the loyalty that people have to those magnificent parishes, but now of course the people have moved, and the church always follows the people," Archbishop Dolan said.

He noted that New York’s bishops met June 21 and were discussing causes and potential solutions for declining Mass attendance. He said the issue poses a tremendous pastoral problem for the bishops, noting that declining attendance is a problem faced by other major religions as well.

"We bishops are aware of the sobering statistics that are coming out and which keep us awake at night worrying about a declining Mass attendance and worrying about a diminishment of fidelity among our Catholic people," Archbishop Dolan said.

He noted that the bonds that once held Catholic communities together have been evaporating.

"People feel perhaps less of an adhesion to the religion of their upbringing," Archbishop Dolan said. "We’ve got to do something about that. That has evangelical and catechetical dimensions. We’ve got to be better in getting out in a more creative, cohesive way the truth and the attraction of Catholicism."

Also at the press conference, Bishop Clark noted that some social norms that once served to support Catholicism have eroded. During his youth, the bishop noted, children’s recreation activities never were scheduled on Sunday mornings, but today’s families sometimes must choose between such activities and religious services.

"There’s not that cultural observance of the sanctity of the Sabbath, whether it’s the Friday, Saturday or Sunday Sabbath, depending on the (faith) tradition," Bishop Clark said. "It’s just something that we didn’t create but that we have to deal with and cope with. People see church, unfortunately, as one more nice option for their Sunday morning."

However, Bishop Clark said there is an up side to people considering Mass as an option: Those who do attend often are more engaged because they have chosen Mass instead of other claims on their time, energy and interest.

Archbishop Dolan said Catholics can learn a lot from evangelical Christians who knock on doors and invite people to attend their worship services. Although a devoted base of Catholics love, treasure and cling to their Catholic roots, he said the church has to make an effort to reinvite those who have turned away.

"We can no longer take for granted the faith, the allegiance, the cohesion of our people," he said. "We’ve got to win them. We almost have to be salesmen and saleswoman again, and that’s not bad because that’s what Jesus asks us to do. We can’t coast. We can’t wait for the people to come to us."