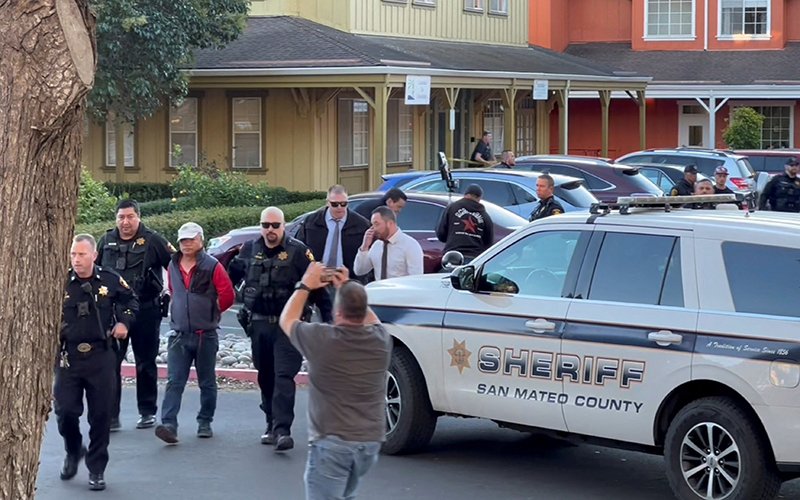 Police officers in Half Moon Bay, Calif., detain a man believed by law enforcement to be the Half Moon Bay mass shooting suspect Jan. 23, 2023, in this screengrab taken from a social media video. At least seven people were killed and one person critically injured that day in shootings at two separate locations in the small coastal community in the San Francisco Bay area, officials said. It was the state's second mass shooting in 48 hours. (OSV News photo/Kati McHugh, social media via Reuters)

HALF MOON BAY, Calif. (OSV News) — Less than 48 hours after 11 people were killed and nine more injured at a dance hall Jan. 21 in Monterey Park, California, seven more people were shot and killed at two different landscaping nurseries Jan. 23 near Half Moon Bay, California, according to the San Mateo County Sheriff’s Office.

The suspect, 67-year-old Chunli Zhao, was taken into custody after he was found in his car in the parking lot of the Half Moon Bay sheriff’s office substation. He is believed to have acted alone.

Just before 2:30 p.m. local time deputies were dispatched to Cabrillo Highway (U.S. Route 1) upon the report of a multiple-victim shooting. Upon arrival, the deputies found four people deceased with gunshot wounds and another with life-threatening injuries. At a separate scene nearby, three additional victims were found deceased with gunshot wounds. All victims are believed to have been workers at the nurseries. The suspect also is believed to be a worker at one of the farms.

“It’s a big rural location so people are working, it’s spread out,” San Mateo County Sheriff Christina Corpus said. “There’s people that live at the location as well, so it was in the afternoon when kids were out of school. For children to witness this is unspeakable.”

“We need to reclaim God at the center of our lives,” he said. “He is the one who will grant us his peace.”

The incident at Half Moon Bay took place less than 48 hours after a mass shooting that left 11 people dead and at least nine more wounded at a dance studio nearly 400 miles south in Monterey Park, California. “We pray for those killed and injured in this shooting, and we ask that God stay close to their families and loved ones,” said Los Angeles Archbishop José H. Gomez in his Sunday Mass homily at St. Bridget Chinese Church Jan. 22.

In a separate statement, Archbishop Gomez prayed for God to give “wisdom and prudence to law enforcement and public officials working to make sense of the violence and keep our communities safe.”

“We pray also for peace in our own hearts,” he said. “We pray that we might feel God’s love and know that he will deliver us from every evil.”

Archbishop Gomez concluded by asking for the intercession of Mary, the Blessed Mother, “to be a mother to us in this hour of pain and uncertainty.”