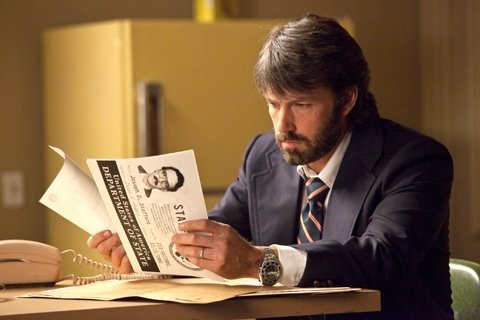 NEW YORK (CNS) — A tense, clandestine and quirky chapter in recent history is turned into an engrossing fact-based thriller in "Argo" (Warner Bros.).

Though serious themes and a surfeit of swearing make this drama suitable only for adults, mature viewers will find their fortitude in the face of exploding F-bombs rewarded by a positive treatment of marriage and a brief but telling salute to faith-based values.

Set against the backdrop of the Iran hostage crisis of 1979-81, "Argo" tells the story of CIA agent Tony Mendez (Ben Affleck). Tasked by his boss Jack O’Donnell (Bryan Cranston) with rescuing the handful of U.S. embassy employees who managed to escape capture when that facility was overrun by armed militants, Mendez hatches a seemingly far-fetched scheme: He’ll smuggle them out of Tehran — where they’ve been hiding in the Canadian embassy — disguised as a Canadian film crew touring the Middle East to scout locations.

To make this outlandish cover convincing, Mendez enlists the help of veteran Hollywood producer Lester Siegel (Alan Arkin) and makeup artist John Chambers (John Goodman). Hurriedly, the trio works together to drum up publicity for the imaginary film project that gives this movie its title. The real script they’re using is a characteristic Tinseltown artifact of the era: a second-rate rip-off of "Star Wars."

Affleck, who also directed, masterfully alternates between life-or-death drama and high-stakes humor. Though both aspects of the story too frequently give rise to coarse dialogue, the canny patriotism and emotional impact of the picture — as scripted by Chris Terrio — make for a rousing experience.

Even as he dedicatedly pursues his dangerous mission into hostile territory, Mendez is preoccupied by family problems. He and his wife have separated, and she’s taken his young son away to live with her. Mendez maintains as much contact with both of them as he can, holding on to the distant prospect of a happy outcome.

As the fugitives he’s been sent to help prepare to cooperate with Mendez’ desperate plan, one of them quietly studies a prayer card with an image of the Infant of Prague on it. He then slips the card into the copy of the "Argo" screenplay he’ll carry with him throughout the coming ordeal.

The implicit contrast between the innocence and gentleness conjured up by that widely beloved icon and the screaming hordes of religiously inflamed zealots who abuse their prisoners inside the violated embassy is a striking one. But the fundamental difference being highlighted may have more to do with the nature of civilized life itself than with the varieties of belief.

Either way, audiences will note who prevails.

The film contains potentially disturbing scenes and images, an abortion reference, a half-dozen uses of profanity as well as many rough and crude terms. The Catholic News Service classification is A-III — adults. The Motion Picture Association of America rating is R — restricted. Under 17 requires accompanying parent or adult guardian.