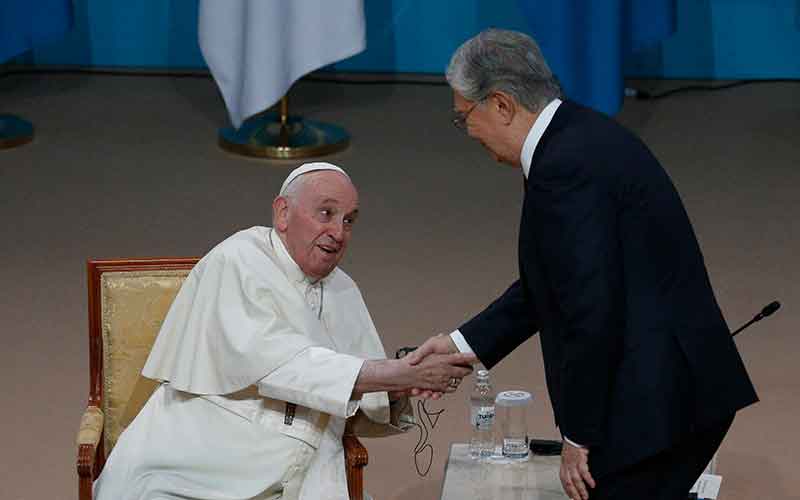 Pope Francis greets President Kassym-Jomart Tokayev during a meeting with government authorities and members of the diplomatic corps at the Kazakh Central Concert Hall in Nur-Sultan, Kazakhstan, Sept. 13, 2022. (CNS photo by Paul Haring)

NUR-SULTAN, Kazakhstan (CNS) — Arriving in Kazakhstan, a country that borders Russia, Pope Francis said he came as a “pilgrim of peace” at a time when “our world urgently needs peace; it needs to recover harmony.”

“I am visiting you in the course of the senseless and tragic war that broke out with the invasion of Ukraine, even as other conflicts and threats of conflict continue to imperil our times,” the pope said Sept. 13 in a speech to the country’s civil authorities, representatives of civic groups and members of the diplomatic corps.

“I have come to echo the plea of all those who cry out for peace, which is the essential path to development for our globalized world,” he said.

After a nearly seven-hour flight from Rome, Pope Francis arrived in the capital city, Nur-Sultan, where he will attend the Sept. 14-15 Congress of World and Traditional Religions. As he arrived in Kazakh airspace, his plane was escorted by fighter jets.

Arriving at the presidential palace, Pope Francis, who continues to suffer from knee pain, remained seated while Kazakh President Kassym-Jomart Tokayev stood next to him as an honor guard played the national anthems of Vatican City State and Kazakhstan.

Welcoming the pope, President Tokayev thanked him for his “tireless and dedicated efforts in the name of the human family around the world” at a “critical juncture in human history.”

As Islamophobia, antisemitism and Christian persecutions continue to rise, the president said, “humanity could really go one way or the other if we are not vigilant.”

“I believe it is high time for moderates from different cultures and religions to pool their wisdom and energy to unite people behind the ideas of peace, social harmony and mutual support,” he said.

Tokayev said the pope’s presence at the interreligious meeting would ensure its success “and instill a true joy and happiness in the hearts of all devout Catholics in Kazakhstan and beyond.”

Responding to the president and addressing the civil leaders, the pope reflected on the two-stringed “dombra,” a traditional Kazakh musical instrument, and noted its use for centuries, thus “linking the past to the present.”

“As a symbol of continuity in diversity, its rhythm accompanies your country’s memory,” he said. “It thus serves as a reminder of how important it is, amid today’s rapid economic and social changes, not to neglect the bonds that connect us to the lives of those who have gone before us.”

Because of its history, St. John Paul II regarded Kazakhstan as a “land of martyrs and of believers, land of deportees and of heroes, land of intellectuals and artists,” he said.

That history, the pope said, is one of “culture, humanity and suffering,” particularly during the Soviet era that brought prison camps and mass deportations.

Nevertheless, “Kazakhs did not let themselves remain prisoners of these injustices,” the pope said. “The memory of your seclusion led to a deep concern for inclusion.”

“In this land, traversed from ancient times by great displacements of peoples, may the memory of the sufferings and trials you endured be an indispensable part of your journey toward the future, inspiring you to give absolute priority to human dignity, the dignity of every man and woman, and of every ethnic, social and religious group,” he added.

Noting the hundreds of ethnic groups peacefully coexisting in Kazakhstan, the pope said he was honored to take part in the Congress of World and Traditional Religions to “emphasize the importance and the urgency of this aspect of encounter, to which religions are called especially to contribute.”

He also praised Kazakhstan’s constitution, which defines the country as a “secular state” and thus, “provides for freedom of religion and belief.”

“A healthy secularity, one that acknowledges the important and indispensable role of religion and resists the forms of extremism that disfigure it, represents an essential condition for the equal treatment of each citizen, while fostering a sense of loyalty to the country on the part of all its ethnic, linguistic, cultural and religious groups,” he said.

Freedom also recognizes basic human rights, the pope said, praising the country’s abolition of the death penalty “in the name of each human being’s right to hope.”

The pope lauded Kazakhstan’s commitment to peace and expressed his appreciation for the country’s “decisive repudiation of nuclear weapons” as well as its environmental policies that invest in clean sources of energy.

“Together with a commitment to interreligious dialogue, these are concrete seeds of hope sown in the common soil of humanity,” Pope Francis said. “It is up to us to cultivate those seeds for the sake of coming generations, for the young, whose desires must be seriously considered as we make decisions affecting the present and the future.”