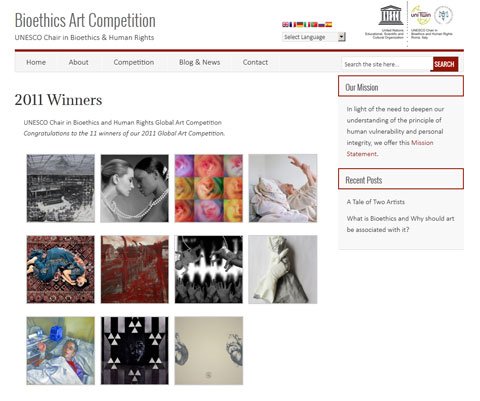 This screen capture shows the 2011 winners of the art contest sponsoredby the United Nations Educational, Scientific and Cultural Organization’sChair in Bioethics and Human Rights.

Dan Kane is a scientist — a medical nuclear physicist, to be more specific. He’s used to working with data and charts and numbers that don’t lie.

Two years ago, however, he said that he came to what for him was a stunning realization: Art can be more convincing than even the best set of data.

That’s why Kane feels so strongly about the art contest sponsored by the United Nations Educational, Scientific and Cultural Organization’s Chair in Bioethics and Human Rights, of which Kane is a director. The biannual contest is open to artists, photographers and students worldwide who are invited to create pieces that encourage a deeper appreciation for human life, said Kane, who belongs to St. Francis and St. Clare Parish in Seneca Falls and Waterloo.

"We encourage artists of all faiths and dispositions to create an image, with respect for all cultures and religions, that speaks to the impact of life sciences for present and future generations," Kane said. "We want to illustrate the good, the true and the beautiful as a starting-off point for deeper discussion."

The term "bioethics" refers to behavior and conduct involved in science and technology in the field of life science, according to the mission statement posted on the website for the art contest, which may be found at www.bioethicsart.org. The art contest seeks to "promote those universal values inherent in all cultures regarding goodness, truth and beauty; to ensure the effective protection of human dignity and fundamental rights; and to stimulate greater interest, social sensitivity, compassion and discussion of life science, bioethics and human rights," the statement reads.

Artists can communicate truths in life that otherwise may remain hidden, noted Michael Gannon, U.S. executive director of the UNESCO Chair in Bioethics and Human Rights.

"They can stir thoughts and emotions that are capable of inspiring individuals to aspire to an ideal or a higher good that was not known of, understood or visible prior to contact with the artistic creation facing them," Gannon wrote in a recent blog post.

The winning entries of the 2011 UNESCO Chair in Bioethics and Human Rights’ Global Art Competition were displayed in Houston, Rome and the United Nations building in New York City. Strolling through the gallery of winning entries in Rome opened Kane’s eyes to the persuasive power of art, he said. One such piece was a compilation of images put together by a Houston photographer who had taken a picture of the same homeless man every day for a year.

"Here’s this guy, and he’s got a Houston Texans football shirt on. You saw this poor man declining into death. It’s a different thing than saying, ‘In Houston 24 people died on the streets this year,’" Kane said.

Kane realized this series of images made a good jumping-off point for a conversation about the dignity and value of human life, and was more likely to convince someone of the value of life and importance of caring for the poor than even the best data and statistics.

"It really struck me as a scientist. In physics and in science in general, it’s all data driven and you want to have the best data, and whoever has the best data has the real truth. Data is important, but there’s another half of the equation. It’s a completely different presentation of the same truth," Kane said.

If asked to put together a presentation about global warming, for example, a scientist probably would prepare a PowerPoint presentation complete with charts, graphs and maps, while an artist might take a photograph of a white polar bear sitting in the middle of a mud puddle. The two presentations would be very different, even if the scientist and the artist both reached the same conclusion, Kane said, noting that the art contest is a way to attempt to bridge the chasm between these two ways of thinking.

The contest is a great springboard for further conversation because every human person is attracted to the good, the true and the beautiful, he said.

"We just want them to look at things in a different light, and all the great essays and journals and great statistics and data in the world isn’t going to do what we want to do," Kane said.

EDITOR’S NOTE: For more information about the contest, visit www.bioethicsart.org.